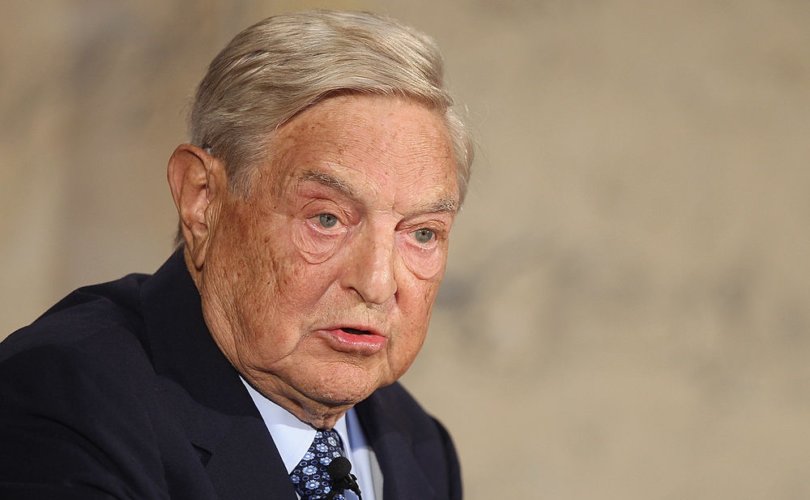 (American Thinker) — Billionaire George Soros is that rare megalomaniac who not only believes he’s a god but revels in behaving like one. “It’s a sort of a disease when you consider yourself some kind of god, the creator of everything, but I feel comfortable about it now since I began to live it out,” he once boasted to The Independent.

This god complex, combined with his downright amorality and bizarre ideas about society, makes the 92-year-old extremely dangerous to democracies, especially America. The warning comes loud and clear in Matt Palumbo’s recent book, The Man Behind the Curtain: Inside the Secret Network of George Soros, which documents Soros’ decades of financial dealings, political operations, and nefarious networks.

Early in the book, Palumbo highlights Soros’ amorality, planted perhaps when his Hungarian Jewish family assumed Christian identities and collaborated with the invading Nazis. The teenaged Soros accompanied his phony godfather, who inventoried properties seized from Jewish families sent to concentration camps. Yet, he says he feels no guilt, only detachment.

“I was only a spectator; the property was being taken away. I had no role in taking away that property. So, I had no sense of guilt,” he said in a 1998 interview on 60 Minutes. He likened his actions then to his playing the markets later. “In a funny way,” he said, “it’s just like in the markets – that if I weren’t there – of course, I wasn’t doing it – but somebody else would – would be taking it away anyhow.” He recounts that period as “probably the happiest year of my life” and “a very happy-making, exhilarating experience.”

Besides hubris and amorality, two major ideas drive Soros. He has a personal theory of “reflexivity” and the philosophy of Karl Popper, his guru at the London School of Economics (LSE). Both have inbuilt ironies. While “reflexivity” might be just an eccentric speculator’s hobby horse, Popper’s ideas, riding on Soros’s mind and money, could lead the free world into an anarchist-leftist hell.

Simply put, reflexivity says the world is very complex, so humans use perceptual shortcuts like generalizations, dichotomies, metaphors, and decision rules. These, in turn, affect reality via the changes they cause in human behavior. Soros believes that, guided by this concept, he has gamed the markets by recognizing when perception and reality are at enough variance for betting big. Like all “systems” to beat the casino, this is humbug and hubris, for it posits someone immune to the perceptual shortcomings that, by the premise, afflict everyone. But every successful speculator’s theorizing gains some indulgence, never mind the informants and networks he’ll never mention. Nor is Soros innocent of insider trading, either.

That is Soros’ business. What should worry us is his obsession with implementing Popper’s ideas. In The Open Society and Its Enemies, Popper propounded that no single philosophy possesses the truth, no society is superior to another, and “closed” cultures are built on taboos and a single version of reality. In Soros’ words, in ‘open’ cultures, “nobody has a monopoly on the truth; a society which is not dominated by the state or any particular ideology, where minorities and minority opinions are respected.”

This may seem idealistic. But, quoting Eduardo Andino of Philanthropy Daily, Palumbo points out that, if groups must let go of “their truth,” the open society becomes the overarching truth by which its members must live, leaving no diversity. Witness how conservatives and others resisting the left’s anarchic impulses are denounced as authoritarian.

Much of that is because Soros funded leftist causes like Antifa, and BLM through his Open Society Foundation (OSF), the NGO he set up with $32 billion to spend on disruption. He is the largest donor in American politics, spending billions on political projects in 37 countries through over 50,000 grants. With sociopathic aplomb, he has destabilized and toppled governments, broken currencies, and attacked Western democracies and institutions, all in the name of freedom, rights, and equity.

Palumbo calls Soros a “Schrodinger’s meddler,” both denying and boasting about his activities. When President Eduard Shevardnadze’s government fell in 2003, Soros said it was the Georgian people’s will, and he had nothing to do with it. Months later, he told the New York Times: “I’m delighted by what happened in Georgia, and I take great pride in having contributed to it.”

Soros’ initial projects involved anti-communist activities in Poland, ousting a popularly elected president in Ukraine, and anti-Gorbachev interventions in Russia. The last denied Russians, emerging from 70 years of communism, any chance of economic freedom. As a one-size-fits-all globalist, he sees the European Union as “the embodiment of the idea of the open society,” where like-minded states surrender their sovereignty for the common good.

But Soros’ biggest mission is America’s downfall, which he considers the biggest impediment to an open society. He entered American presidential politics in 2003, opposing George W. Bush and the war on terrorism after 9/11. He started numerous left-wing organizations to influence America’s social fabric. As tax-exempt groups, they receive unlimited funds and use them to influence elections.

Using his hold on the media, universities, and the White House, Soros has been able to push his ideas on racism; ecology and conservation; welfare for illegals; legalizing drugs; going soft on crime; automatic voter registration; canceling student; housing; and medical debt; and cutting military budgets. Equally, he has pushed socialist agendas, such as increasing government dependency, unionizing all jobs, and advancing racial and gender diversity. This may seem unusual coming from someone who made billions in the markets, but it’s a potent strategy to destroy the American ideals of competition, merit, and excellence.

In 2015, Soros began backing state prosecutors who want to dismantle the criminal justice system, portraying it – and America itself – as systemically racist. According to him, one should “blame the system, not the criminal, who is the real victim.” Around the time BLM was growing, he spent hundreds of millions to back candidates who were anti “law and order,” weak on crime, tough on gun control, and opposed to cash bail.

After donating heavily to Barack Obama’s Senate and presidential races and pouring money into Hillary Clinton’s campaign, Soros spent even more to defeat Donald Trump in the 2020 election. He told the World Economic Forum that Trump’s America First agenda ran counter to the globalist project. While criticizing big money’s influence in politics, he injected $81 million (including $70 million of his own) through the Democracy PAC. Using the pandemic as an excuse, his funding vehicles sought to increase vote-by-mail, expanding opportunities for vote tampering and harvesting.

He war-gamed election outcomes and, visualizing a “despotic” Trump’s refusal to leave office, started the Transition Integrity Project, a backup plan of civil disobedience and revolutionary protests. He infiltrated the Biden-Harris team even before it took office by raising $20 million for transition teams of officials to prepare the duo to “hit the ground running” on Day One.

The same year, Soros budgeted over $63 million to further progressivism in higher education, beginning with the Central European University (CEU) in his native Hungary. He also brought together world leaders and Harvard liberals to create a “multilateral economic system where America is not dominant.” When Viktor Orbán forced him out of Hungary for supporting mass refugee resettlement in Europe, he turned to funding universities in America and other countries.

Palumbo’s painstakingly researched book also traces Soros’ hand in the media, including journalism schools – which is why they push his pet issues and put out “fact checks” to deny his infamous past. Thus, he can shape narratives and target those who don’t match his global vision. As he angles to perpetuate his influence beyond the grave, through his son Alexander, his second wife Susan Weber, and other acolytes, free societies worldwide should brace for a long battle.