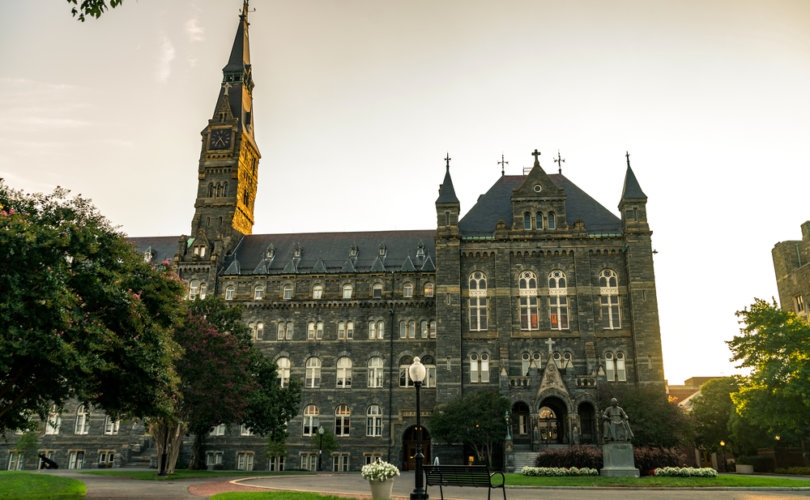 November 21, 2016 (Cardinal Newman Society) — Just eight months after being chastised by the Archdiocese of Washington for lacking an “environment of morality, ethics and human decency” on campus, Georgetown University proudly hosted a day-long symposium on Veterans Day featuring a dozen abortion advocates discussing the “injustices” of legal barriers to abortion.

There are few evils in the world today as heinous as abortion — the direct killing of an innocent human baby in the womb who was made in the image and likeness of God. And there’s no debating where the Catholic Church stands on the subject. The Church teaches that abortion is “gravely contrary to the moral law,” and formal cooperation in an abortion constitutes a grave offense. One can even be excommunicated from the Church for procuring an abortion.

But at Georgetown, expressing support for abortion on campus is simply part of the “free exchange of ideas,” no matter how evil or offensive those ideas are to the faith traditions the university claims to represent. At least, that’s what the administration said back in March, when America’s oldest Jesuit and Catholic university came under fire for hosting Planned Parenthood CEO Cecile Richards, a woman responsible for the deaths of almost three million babies. The Archdiocese of Washington pushed back against the decision, and the archdiocese’s official newspaper went even further in denouncing the move.

“Welcoming an ardent supporter of the violent taking of an unborn human life is deeply offensive and heart-rending to other Georgetown students, teachers, alumni and community members who believe in the Catholic teaching that all human life has God-given dignity from conception to natural death,” the paper stated in an editorial. “Apparently to some, the one group of people that it is acceptable to offend, even at a Catholic university, are Catholics.”

But the university refused to uphold its Catholic identity and disinvite Richards, potentially endangering students’ souls according to The Cardinal Newman Society, which called on Georgetown to rescind the invitation. This month, not only did Georgetown embrace guest speakers that support abortion, but the specific focus of the event featuring these advocates was how laws meant to protect unborn life are unjust.

The Georgetown Journal of Gender and the Law (GJGL) at Georgetown Law was the host of the pro-abortion November 11 event entitled “Dismantling Reproductive Injustices: The Hyde Amendment and Criminalization of Self-Induced Abortion.” The mission of the GJGL is to “explore the impact of gender, sexuality, and race on both the theory and practice of law.” The stated goal of the event was to bring together “leading scholars and practitioners in the fields of reproductive justice, feminist jurisprudence and queer legal theory” to focus on “the intersections of access to reproductive healthcare, gender identity, poverty, race, ethnicity and culture” as relates to the Hyde Amendment and self-induced abortion.

Portrayed as a scholarly affair to be featured in the journal’s biennial symposium issue, the conference was clearly aimed at attacking the right to life and efforts to safeguard the human dignity of the unborn. A news report described the event as featuring “pro-abortion advocates who seek abortion-on-demand and taxpayer-funded abortion through federal health programs.”

The two “injustices” discussed — the Hyde Amendment and laws against self-induced abortion — are in place to protect human life. The Hyde Amendment restricts taxpayer funding for abortion at the federal level and has saved more than 2 million lives in the last 40 years. “Self-induced abortion” is another way of saying “at-home abortion,” which involves killing an unborn child through non-surgical means that involve limited or no supervision by medical professionals.

Every featured speaker at the symposium is in some way involved in trying to legalize, normalize or support abortion either through their personal activism or through their employers and affiliated organizations. And the event was co-sponsored by the abortion advocacy organization If/When/How along with a Georgetown institute that publicly supports abortion on its website, the O’Neill Institute.

Georgetown University’s O’Neill Institute for National and Global Health Law was established to “respond to the need for innovative solutions to the most pressing national and international health concerns.” The Cardinal Newman Society noted back in February that O’Neill Institute Faculty Director Lawrence Gostin, along with a fellow Georgetown professor and researcher at the Institute, published an article on the Institute’s website advocating for greater abortion and contraception access in response to the Zika virus outbreak. Several other articles supporting abortion also appear on the O’Neill Institute website, a number of which were authored by Institute Associate Rebecca Reingold, who previously worked for International Planned Parenthood Federation.

If/When/How was previously known as Law Students for Reproductive Justice (LSRJ). LSRJ sponsored student chapters at law schools, including Catholic law schools, to train and mobilize students in the fight for “reproductive justice,” which includes access to abortion. An “unofficial” LSRJ chapter existed at Georgetown. If/When/How is an expanded version of LSRJ, but is just as much dedicated to ensuring legal protections for abortion. And while many pro-life advocates talk about abortion as the greatest human rights abuse of our time, If/When/How views abortionists at human rights champions. The organization’s executive director Sabrina Andrus gave the opening remarks at the recent Georgetown symposium.

As previously mentioned, there wasn’t one featured speaker at the “Dismantling Reproductive Injustices” event that could be seen as a champion for the right to life. The symposium was split up into three panel sessions on the Hyde Amendment and self-induced abortion internationally and in the U.S.

The keynote address was delivered by Melanie Rainer, senior counsel serving pro-abortion U.S. Senator Patty Murray of Washington on the Senate Committee on Health, Education, Labor and Pensions. Rainer has been a featured speaker the past two years at the national conference of the abortion supporting organization National Family Planning and Reproductive Health Association.

The “Self-Induced Abortion Internationally” panel included Patty Skuster, Elida Caballero Cabrera and Andrea Parra. Skuster does legal work for Ipas, an organization that promotes access to abortion around the world. Cabrera is the advocacy adviser for Latin America and the Caribbean at the Center for Reproductive Rights, a global legal group that fights for “expanded access to reproductive healthcare” including “birth control” and “safe abortion.” Parra of American University’s Washington College of Law is also vice president of the board of directors of Women Enabled, which published a report in April arguing that women infected with Zika need access to abortion.

Brigitte Amiri, Michele Goodwin, Jill Adams and Kate Vlach were the featured speakers on the Hyde Amendment. Amiri is a senior staff attorney at the ACLU’s Reproductive Freedom Project, where she works to break down legal barriers meant to defend the unborn. Goodwin is the chancellor’s professor of law at the University of California, Irvine. CNSNews.com reported on some of Goodwin’s comments during the symposium where she compared an unborn life to a “clotted colon” and said laws requiring a transvaginal ultrasound before an abortion were comparable to “state-sanctioned rape.” She just recently wrote a column at Huffington Post expressing support for contraception and abortion.

Adams is the founding executive director of the Center on Reproductive Rights and Justice at Berkeley Law. She’s a champion for legalizing “self-induced abortion,” where women use “pharmaceutical pills, traditional herbs, or other means” to kill their unborn children. Vlach of the DC Abortion Fund helps the organization raise and distribute money to pregnant women in the Washington, D.C., area to pay for their abortions.

The final panel featured Zsea Bowmani, Alison Ojanen-Goldsmith, Melissa Mikesell and Aziza Ahmed. Bowmani joined the ACLU of Illinois last year in the newly-created position of Tawani Transgender Rights Fellow. The organization advocates for improved legal access to abortion. Ojanen-Goldsmith works for Full Spectrum Doulas, an organization that supports women having abortions. Ojanen-Goldsmith said in a 2010 interview that part of her goal “as a full spectrum doula” is to work towards “demedicalizing” abortion.

Mikesell is the supervising attorney at Center on Reproductive Rights and Justice at Berkeley Law. Last year, Mikesell and her colleague Adams argued in a court brief that women should legally be able to abort their children at home. Ahmed is a law professor at Northeastern University School of Law. In a June 2016 interviewpublished on Northeastern’s website, Ahmed vehemently argued in favor of legalized abortion.

If Georgetown hosted a dozen capital punishment advocates to discuss the “injustices” of laws against the death penalty, would there be any question about the message being sent and the motives behind such an event? The “Dismantling Reproductive Injustices” conference wasn’t just an academic exercise; it was about advocacy.

Appeals to academic freedom and the “free exchange of ideas” can’t justify this event and its evil intentions. There’s absolutely no indication that Georgetown simply wanted to examine these laws in an objective manner. The Church recognizes the importance of academic freedom at Catholic colleges, but insists that it’s practiced “within the confines of the truth and the common good.” A Catholic university’s obligation to search for and teach truth includes the truth about the sacredness of human life. Not one of the speakers could be said to offer a faithful Catholic witness to students on campus, and their support for assaults on the human dignity of the unborn in no way serves the common good. In allowing this event to take place, Georgetown’s leadership failed in their responsibility for maintaining and strengthening the Catholic identity of the university.

The Archdiocese of Washington said in March that the Jesuit community at Georgetown “clearly has its work cut out for it and a long way to go” towards instilling the “values of Pope Francis” on campus that reflect care for human dignity. It’s unfathomable how this recent symposium helps Georgetown make any progress down that long road.

The university’s persistent embrace of abortion activists is nothing but scandalous and a slap in the face of the bishops and all the Catholic faithful. Serious and immediate action needs to be taken to ensure Georgetown’s commitment to Catholic identity, or the leadership of the university should finally publicly admit that it has no concern for appearing to be a faithfully Catholic institution.