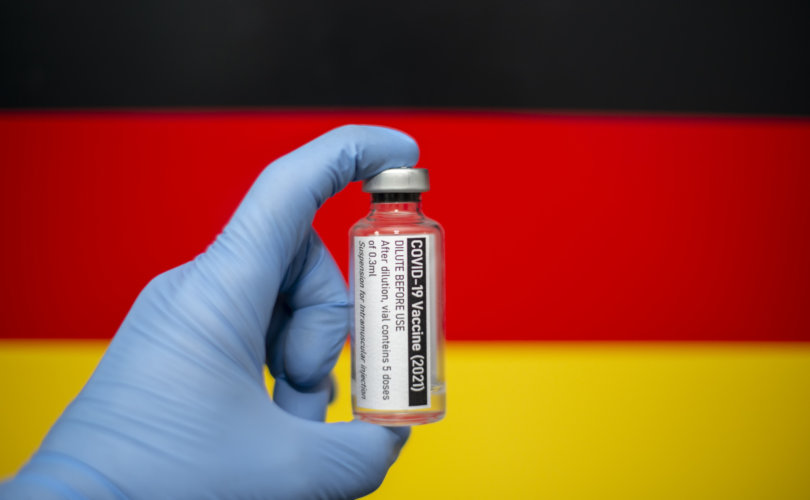 (The Daily Sceptic) – The German government publicly acknowledged on Wednesday that the COVID vaccines cause serious side effects for one in every 5,000 doses.

A tweet from the Ministry of Health stated (via Google translate): “One in 5,000 people is affected by a serious side effect after a COVID19 #vaccination. If you suspect #sideeffects, get medical attention and report your symptoms to @PEI_Germany.”

It later added a correction that the figure related to the reporting rate and to doses rather than individuals: “Correction: According to @PEI_Germany, the reporting rate for serious reactions is 0.2 reports per 1,000 vaccine doses.” Subsequently, the original tweet was deleted and a corrected version put up.

This is an unusual and welcome admission from a government, and perhaps the beginning of governments properly acknowledging the scale of injuries caused by the novel COVID vaccines.

However, the one in 5,000 figure is certainly on the low side. The correction tweet clarified that it was a reporting rate of serious reactions, and it appears from the PEI website to refer to the rate of adverse event reports to the German equivalent of the Yellow Card and VAERS passive reporting systems. Assuming this is right, then we might expect an under-reporting factor of around ten, meaning the true number of serious side-effects may be ten times higher.

The Germans are actually very good at monitoring vaccine safety. In addition to their passive reporting system, the German medicines regulator, the PEI, runs an active vaccine safety monitoring app called SafeVac 2.0. The data from this monitoring app were included in a Europe-wide report on vaccine safety published last month and showed that 0.3 percent of vaccine recipients in Germany reported at least one serious adverse reaction to the first dose of the vaccine. The report states:

“Of the 520,076 participants from Germany who had received the first dose of a COVID-19 vaccine, 1,838 (0.3%) reported experiencing at least one serious adverse reaction. A total of 1,191 (0.2%) and 39 (0.2%) participants receiving BioNTech/Pfizer and Moderna respectively reported experiencing a serious adverse reaction while 608 (0.7%) receiving AstraZeneca reported a serious reaction.”

These German figures are in line with the overall rates across Europe, according to the report: “Across the sites 0.2–0.3% reported at least one serious adverse reaction after receiving the first and/or the second dose.”

However, note that a rate of 0.3 percent is 15 times higher than the rate of 0.2 per 1,000 (i.e., 0.02%) quoted in the tweet. If the figure in the tweet comes, as I suspect, from a passive reporting system (which seems likely as the tweet directs readers to the PEI’s passive reporting portal), this would be an under-reporting factor of 15, which is about what we expected.

But why, then, is the German government using the 0.02 percent figure instead of the 0.3 percent figure from its state-of-the-art vaccine safety monitoring tool when drawing attention to vaccine side effects? I’d like to think that question didn’t answer itself.

I should add that it wasn’t easy to find the SafeVac 2.0 data. I searched in vain for them on the PEI website; if they’re there then they are nowhere obvious. In the end I could only find them, via a general web search, embedded in the Europe-wide study cited above.

Worries about high rates of serious vaccine side effects have been raised before in Germany. In May, Professor Harald Matthes, a scientist leading a separate study into the safety of the vaccines, said that according to his data around 0.8 percent of vaccinated people in Germany were struggling with serious side-effects. This was in line with international evidence, he said, and much more needs to be done to help them.

“The number is not surprising. It corresponds to what is known from other countries such as Sweden, Israel or Canada. Incidentally, even the manufacturers of the vaccines had already determined similar values ​​in their studies… Most side effects, including severe ones, subside after three to six months, 80% heal. But unfortunately there are also some that last much longer.

In view of around half a million cases with serious side effects after COVID vaccinations in Germany, we doctors have to take action. We have to come to therapy offers, discuss them openly at congresses and in public without being considered anti-vaccination.”

A board member of a large German insurance company also spoke out in February, saying that his company’s data showed serious vaccine injuries running at around ten times the rate reported by the German government.

The evidence is consistent, then: 0.3–0.9 percent of vaccinated people (the percentage partly depending on the number of doses) suffer a serious reaction to the vaccine that leads them to require medical care or hospitalization.

These data should be much more widely publicized as part of obtaining informed consent. Everyone who receives a COVID vaccine should have been told in writing that the rate of serious side effects is around one in 300 doses (with variations for age and sex).

Note that such a frequency is properly termed “uncommon,” rather than “rare” as per the current labeling. This is an extremely high frequency for a vaccine of course, and raises serious questions about whether the vaccines should be approved at all, especially for younger age groups.

As it is, hardly anyone knows that these are the government’s own data on serious vaccine reactions, and governments are making no obvious effort to tell them.

So, it’s one cheer for the German government for actually doing something to raise awareness of serious vaccine side effects. But next time, maybe use the actual data, rather than a figure that’s 15 times smaller.