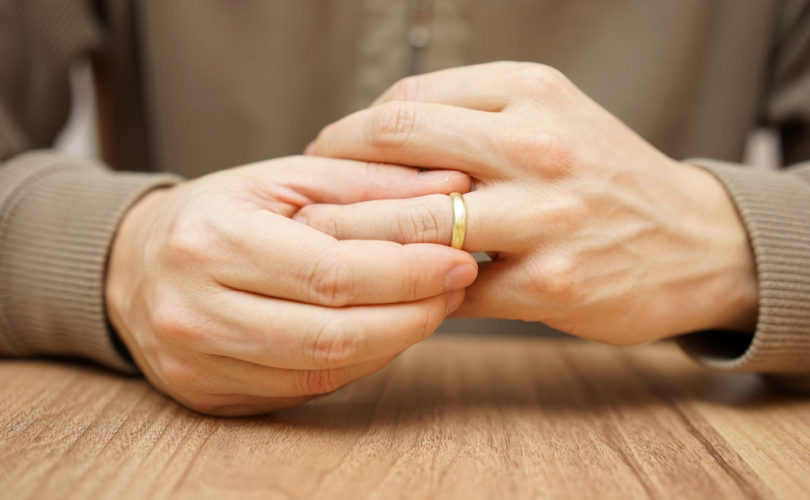 July 8, 2015 (LifeSiteNews) — Since Cardinal Walter Kasper has just published an article in the July issue of the German Catholic journal Stimmen der Zeit (Voices of the Time) concerning the question of the “remarried” divorcees and their possible admission to the Sacraments and thereby revived this topic, it might be helpful to present a book that recently has been published, in 2015, in both German and Italian. The book is written by the layman Rainer Beckmann, and has the title The Gospel of Marital Fidelity (Das Evangelium der ehelichen Treue). The German book was published by the fe-medienverlag in Kisslegg, Germany.

Rainer Beckmann, who himself has been divorced by his Catholic wife, who then proceeded to marry civilly another man, speaks as one who finds himself in the exact situation that Cardinal Kasper himself claims to intend to resolve. Mr. Beckmann, a lawyer, found himself suddenly after many years of marriage and family life alone and saddened. However, on the background of his own strong Catholic Faith, it took him not much time – and very soon it was after his wife left him – to make the firm decision to remain loyal to his own marriage vows. He therefore lives now as a single man, though still married in the eyes of God. He hopes that his own book might contribute to the change of mind of his own wife, even that she may return to him.

In his book, Beckmann calmly responds to the Kasper proposal. He presents in different chapters the arguments of the Cardinal in order to refute them. As Cardinal Paul Josef Cordes, who wrote a foreword to this book, puts it:

In this book, it is not a Cardinal who raises his voice, but someone who had to undergo the current drama of the divorced within the Catholic Church in his own life; and that is why he has to be listened to. […] The author of this publication deserves first of all special attention because he preserves an important truth in the middle of the noise of the synodal commentaries by bishops and the media, namely: remarriage is not a “must” for divorcees. This clarification is necessary. It is eventually unpleasant for those who claim to be the truly merciful ones (and thereby paradoxically totalize “mercy”), but it is required.

Cardinal Cordes also reminds us that “1500 years of Church's history have not, up to now, found an acceptable concept of how to grant remarried divorcees the access to the Sacraments of Penance and of the Altar. Careful shepherds therefore are not thoughtless 'hardliners' or 'rigorists.'” The German cardinal, who raised his voice in the current debate already in March of 2015, also reminds the reader that the Church is bound by Holy Scripture: “Who follows Holy Scripture will quickly recognize the limits which are given to a Church's reform.” The indissolubility of marriage is clearly presented in three Gospels. Therefore, one ought not ignore this teaching, as Cordes says:

The Gospels demand from the Church's authority to be respected. The Word of God is not subjected to it or at its disposal. Remarried divorcees clearly ignore the unequivocal commandment of Jesus. They live in a situation which objectively contradicts the Law of God and therefore are not allowed to “walk up to Holy Communion.”

In a convincing way, Rainer Beckmann presents his own clear argumentation in defense of the Catholic moral teaching, while also applying his argumentative and reasoning approach as an expert in jurisprudence (he is currently working as a Judge) and in ethics relating to pro-life issues. While quoting Cardinal Kasper and especially his book The Gospel of the Family, which contains the Kasper proposal as presented at the Consistory of Cardinals in February of 2014, he shows that the crucial point is that the “remarried” divorcees are not willing to make the step away from their sin, namely the sin of adultery, but decide to remain in their state. As long as these couples remain in their state of sin, they may not receive Holy Communion. As Beckmann shows, the idea of a penitential period and time of discernment that could lead these couples to the reception of the Sacraments would not change their state of life. Only their conversion and adaptation of their lives to the Commandments of God can help them to save their souls.

After presenting the fact that so many German Catholics are living in such irregular situations, Beckmann points out that it is very problematic to refer, in this context, to the sense of the faithful (Sensus Fidelium) as Cardinal Kasper often does. Beckmann asks whether Kasper refers merely to those Catholic couples who ignore God's teaching, but not also to those who stay loyal to their marital vows in spite of a separation. He says:

The “faithful” to whom the Cardinal [Kasper] refers are obviously not those who remain faithful to their spouse in spite of the separation, but those who demand an admission to the Sacraments for remarried divorcees. That in itself is already a remarkable one-sidedness. Do only those “faithful” [the “remarried” divorcees] have a “sense of the faithful” who wish the change of the current norms of the Church? Or does it depend upon which one of the two groups among the faithful is larger or more able to insist upon their demands more successfully?

As Beckmann later points out, the defective understanding of the Catholic Faith among many faithful in Germany is due to the defective “sense of the Faith of many shepherds” who are barely willing any more to even present the moral teaching of the Church to the faithful.

Rainer Beckmann bears witness to the Sacrament of Matrimony by bearing the burden of living alone. And he says that it is feasible:

The life without a partner is certainly not easy and demands from the concerned person a high personal engagement which deserves every societal and human support. However, objectively, one cannot speak of a “need” for and “reliance” upon a second marriage.

The author also points out that there is often a false mercy when one does not speak the truth to the sinner, even if it is hard at times. He reminds us that one of the spiritual works of mercy is “to instruct the ignorant and the sinners.” And, he adds: “There, where the neighbor is erring, 'fraternal correction' is necessary.” Beckmann also shows that it is the sinner who excludes himself from the Sacraments of the Church by his own sinful conduct, and not the Church herself. “It is not the Church that excludes the remarried divorcees from the Sacrament of Penance, but they themselves do it.”

He rightly points out that to give absolution to a person who does not intend to change his conduct is not a help or mercy at all, but “an encouragement to misconduct.” Beckmann also insists that the Kasper proposal is finally also an injustice toward those abandoned spouses who remain loyal to their spouses even though they themselves “remarried.” The Kasper proposal would allow those who break their marriage and “remarry” to have the same access to the Sacraments and the life of the Church as those who remain loyal to Christ's Laws. Beckmann also asks:

If in a new partnership the unlimited participation in the Sacraments is possible, should one then not consider such a new relationship not only as, humanly speaking, an attractive solution, but even altogether as a “better alternative”?

Rainer Beckmann repeatedly comes back to the theme of a “cheap mercy.” “A mercy which does not demand a change of behavior does not deserve this name. It will induce the sinners to continue their sinful lives and, therefore, it is only apparently a help.” A change of life and a return to the sacramental spouse would be a deed that would be worthy of real mercy and not a “cheap mercy.”

As a final point of this short book review, Beckmann also shows that this Kasperite proposal would lead to moral relativism. He follows his own reasoning all the way to the end and considers many of the consequences and says with respect to the admission of unrepentant remarried divorcees to the Sacraments: “Then one should allow also deceivers and thieves who intend to continue to steal the property of others to be released from their sins and to receive Holy Communion.”

This book is well written and presents many important arguments in defense of the traditional Catholic teaching on marriage. (One of the things noted to be missing in this book was any deeper consideration of the children, especially the consequences of divorce upon the little children. For me, it was a significant omission.) It would be a contribution to the English speaking world to find a publisher for this book in English.

It is to be hoped that the arguments of a man who suffers under the loss of his spouse, and who defends and witnesses to the sanctity of marriage in his own daily life, will be heeded. May this book be another cornerstone of the fruitful and loyal defense of Christ's teaching. And may it help to refute the Kasperite proposals more forcefully.