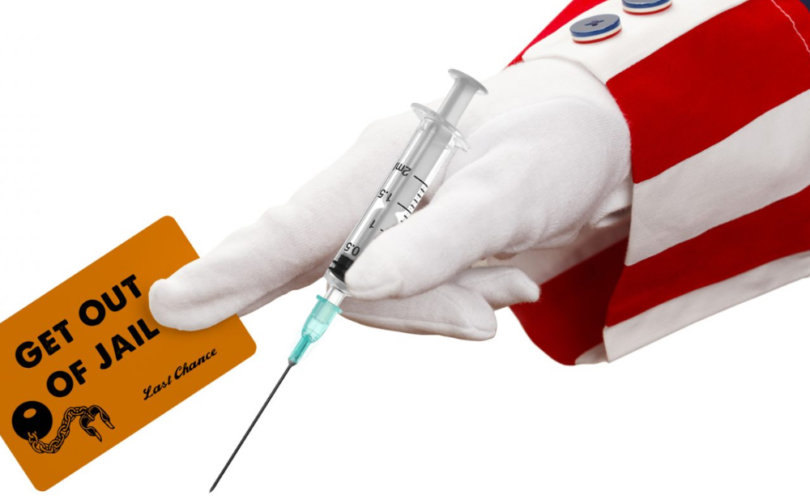 (Children’s Health Defense) – Throughout history, rulers have used domestic or external threats as a means to grab more power.

Appreciating this pattern, authors such as Naomi Wolf and Jon Rappoport have warned that medical crises — real or manufactured — are perfect vehicles for tyranny, offering a ready-made pretext to divest citizens of basic freedoms.

Nearly 15 years ago, Wolf dissected tyrants’ 10-step “blueprint” for transitioning a democracy into totalitarianism. She now argues that most Western countries have reached the treacherous Step Ten: “Subvert the Rule of Law.”

Some of the agents who are supposed to stand up for the rule of law — judges — appear only too willing to participate in Step Ten, using COVID as an excuse to undermine the Constitution they swore an oath to uphold.

Over the past 18 months, we have seen judges across the nation facilitate unconstitutional lockdowns, rubber-stamp restrictions on freedom of assembly and worship and (undermining Sixth Amendment and Seventh Amendment rights to a fair trial by jury) endorse virtual trials that eliminate jurors’ ability to bond and deliberate in person.

With the advent of experimental COVID vaccines, some judges seem to feel emboldened to go even further, attacking bodily autonomy and the Supreme-Court-established right to refuse medical treatment. In recent months, judges have made the high-risk COVID shots a requirement of probation — and even a precondition for being able to see one’s child.

On August 10, divorced mom Rebecca Firlit, who shares custody of her 11-year-old son with her ex-husband, had a nasty surprise when the Cook County, Illinois judge overseeing a routine child support hearing (conducted via Zoom) ordered her “stripped of all parenting time with her son.”

Judge James Shapiro made his apparently “first of its kind” decision after inappropriately asking Firlit whether she had gotten a COVID shot — something that, Firlit said, “had nothing to do with what [they] were talking about” — and found her answer of “no” not to his liking.

Judge Shapiro held firm despite Firlit’s explanation that she had been medically advised not to take a COVID injection due to having had adverse vaccine reactions in the past.

After she sought out the services of an attorney (and media reports helped generate a furious backlash), the judge reversed his decision and recused himself — but only after three weeks of mother-child separation.

Firlit’s attorney, Annette Fernholz, asserted the judge had “no authority to make such decisions,” stating: “In this case you have a judge … deciding, ‘Oh, you’re not vaccinated. You don’t get to see your child until you are vaccinated.’ That kind of exceeds his jurisdiction.”

Despite the reversal, Shapiro’s harsh decision set other events in motion. The boy’s father, who is COVID-vaccinated, filed an emergency motion seeking to reinstate the vaccine requirement for his ex-wife, even though he reportedly had neither expected nor requested the judge’s initial order.

Another order rescinded — for now

In early August, in Ohio’s Hamilton County, Judge Chris Wagner ordered 21-year-old Brandon Rutherford to get a COVID shot as part of a two-year probation sentence.

The judge gave Rutherford, who pleaded guilty to low-level felony drug possession, two months to get the jab, telling him the vaccine was “a lot safer than fentanyl.”

Wagner requires individuals who have not received a COVID injection to wear a face mask in his courtroom, so when Rutherford showed up in a mask, the judge apparently felt entitled to ask the defendant why he hadn’t been vaccinated.

Wagner subsequently told the press the rationale for his vaccine requirement was to “protect” judges, attorneys and law enforcement officers with whom Rutherford might come in contact.

Following the sentencing, Rutherford expressed concerns to his attorney, Carl Lewis, who pushed back against the decision. Lewis told the judge, “Your authority, Your Honor, is not unlimited” and argued it was Rutherford’s “fundamental right [as a human being] to say he does not wish to be vaccinated.”

Four weeks later, Wagner rescinded his decision, couching the reversal in an admission that it was not his role to “teach [Rutherford] to be a better person.” Perhaps aware of the unfavorable public relations optics, the judge stated, “I’m certainly not going to make a martyr out of you by incarcerating you [for not getting vaccinated].”

However, Wagner did not waste an opportunity to again chastise Rutherford for his “poor judgment” and “opposition to vaccines,” while making the sweeping statement that the COVID shots had undergone “the biggest trial in the history of science.”

Other judges are also telling minor offenders they have to get COVID shots, or are offering incentives such as reduced sentencing, invoking the same arguments of “community protection” — and the same moral opprobrium — as did Wagner.

Some judges have stopped short of imposing vaccine requirements but are using their judicial bully pulpit in other ways.

Kirk also used “her daily presence at the Fulton County Courthouse to spread the vaccine messaging to over 8,500 people per day by the use of the recess screen inside and outside the courtrooms … letting courthouse visitors know where they can easily access a vaccination clinic.”

Perhaps most disturbing are the remarks of former Idaho Attorney General and Idaho Supreme Court Judge, Jim Jones, who made a case in The Hill in early September for stripping the medical licenses of any doctor who spreads COVID “misinformation.”

Jones defined “misinformation” as “questioning the effectiveness of COVID-19 vaccines,” “touting alternate … remedies” and “falsely claim[ing] thousands have died from being vaccinated.”

Standing up for the Constitution

In most cases, judges are trained lawyers — professionals who must swear an oath before they can practice law. The oath includes an “inviolable” pledge to behave with integrity and, “above all,” to support the United States Constitution “in all ways, at all times.”

During COVID, a handful of judges have shown, albeit weakly and inconsistently, what it could look like to take their constitutional oaths more seriously.

However, Judge Maloney denied a motion by an employee challenging a similar mandate at Michigan State University, stating the at-will employee has no “constitutionally protected property interest in her employment position.”

In Louisiana, a state where the attorney general “actively opposes vaccine mandates,” District Judge Terry Doughty issued a restraining order preventing Edward Via College of Osteopathic Medicine (VCOM) from mandating COVID shots for students, noting the restrictions VCOM had attached to its religious exemptions — including “a prohibition on activities involving patients” — would cause “irreparable harm” to the students claiming such exemptions.

Judges have also supported COVID patients’ rights to make their own treatment choices, a right “closely associated with the Right to Informed Consent,” by ordering hospitals to respect patients’ requests for ivermectin.

Not everyone involved in the judicial system is on board with the actions of the judges requiring or strongly incentivizing vaccination as part of the sentencing process. In Ohio, an ACLU lobbyist familiar with Judge Frye’s vaccine decisions described them as “problematic,” arguing the COVID vaccine requirement “doesn’t have any real relationship to community control.”

And in the Big Apple, New York Law School Professor Nadine Strossen characterized Judge Zimmerman’s requirement that a petty shoplifter get vaccinated as an “abuse of discretion,” voicing concern that “the judge has this guy in his power and … can impose whatever hobbyhorse is important to him.”

A local defense attorney in Baton Rouge commented: “I don’t think the government is necessarily the right entity to be involved in me injecting something into my body.” The attorney added, “The point is when a government actor steps in to ask you to do something like, ‘Will I suffer for not doing it?’”

“Why have some mistaken this Court’s modest decision in Jacobson for a towering authority that overshadows the Constitution during a pandemic? … I can only surmise that much of the answer lies in a particular judicial impulse to stay out of the way in times of crisis. But if that impulse may be understandable or even admirable in other circumstances, we may not shelter in place when the Constitution is under attack. Things never go well when we do.”