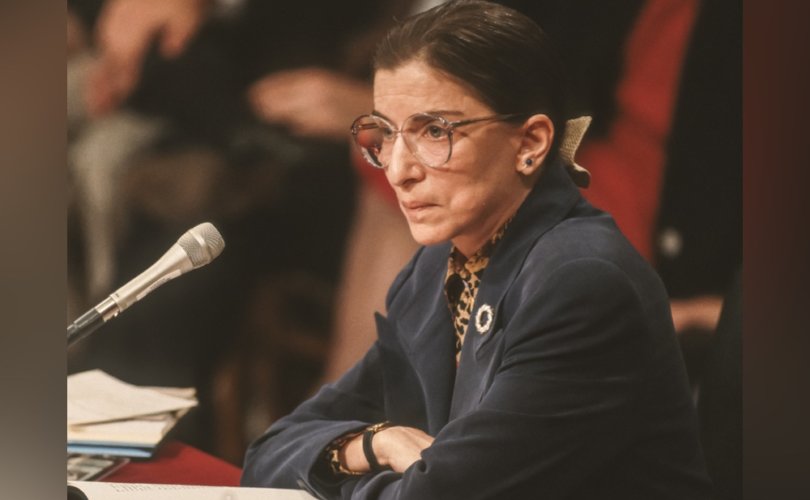 September 30, 2020 (LifeSiteNews) – For years I saw Supreme Court Justice Ruth Bader Ginsburg primarily as an adversary since we were firmly entrenched on opposite sides of our nation’s abortion divide. But now that she has been laid to rest, I decided to take a comprehensive look at her life and accomplishments. I found much to admire.

Justice Ginsburg was a champion for women’s rights and as a lawyer, she argued five cases before the Supreme Court that were based on the 14th amendment’s Equal Protection Clause. She chose men as the plaintiffs in some of the cases to drive home the point that women and men must be treated equally under the law. She was victorious in all five cases.

I have three daughters and three granddaughters, so I appreciate Justice Ginsburg’s personal conviction and legal insistence that women are as capable as men. But I think she sold women short with her support of legal abortion.

In 1993 President Bill Clinton nominated Justice Ginsburg to fill the seat of Justice Byron White, one of just two justices who dissented in Roe v. Wade. During her confirmation hearings before the Senate Judiciary Committee, she said:

“It is essential to woman’s equality with man that she be the decision maker, that her choice be controlling. If you impose restraints that impede her choice, you are disadvantaging her because of her sex.”

She herself had been disadvantaged because of her sex, taking a typist job in Oklahoma after her marriage to her college sweetheart because she was pregnant and perceived as incapable of performing the duties of the government job to which she had applied. Had abortion been legal then, it might have solved the immediate problem, but the discrimination faced by pregnant women would persist. At best, abortion circumvents problems, it doesn’t solve them. At worst, it creates many more problems.

After that child – her daughter, Jane – was born and Justice Ginsburg and her husband were students at Harvard Law, he was diagnosed with an aggressive cancer. She found herself caring for her daughter, keeping up with her own classwork and typing notes for her husband. Would her life have been easier if she had aborted that child back in Oklahoma? Probably. Do you think she ever looked back on that time of struggle and regretted having her daughter? I doubt it.

That abortion was empowering to women was a dogma that lived loudly in Justice Ginsburg but when I read her obituary in the New York Times, I was struck by a quote attributed to her in a 1988 speech. She was speaking of her victories in the Supreme Court over such things as survivor benefits for widowers and establishing that women were as capable as men to administer estates of the deceased. But this is the quote that struck me:

“To turn in a new direction, the court first had to gain an understanding that legislation apparently designed to benefit or protect women could have the opposite effect.”

The proponents of legal abortion insisted that women would benefit from being able to decide whether and when to bear children. But the psychological impact of destroying one’s own child was never mentioned by these ideologues or the abortion profiteers who rushed to set up shop the day after Roe v. Wade, nor was the real danger to women who refuse abortion ever considered. But thousands of women who have shared their abortion stories as part of the Silent No More Awareness Campaign tell harrowing tales of the true cost of abortion.

The incontrovertible proof that abortion hurts women – and men, and families – can be found in the proliferation of programs that offer healing after abortion. The largest of these is Rachel’s Vineyard, a ministry of Priests for Life that offers weekend retreats to mothers, fathers and extended families of abortion victims. Retreats are now held at 1,000 sites in 49 states and 70 countries. The ministry’s training manual has been translated into dozens of languages.

Abortion doesn’t hurt women because pro-lifers say it should. Abortion hurts women because it enables our worst instincts while negating our best. It is the nuclear weapon in the war against women.

For many years, my beautiful and courageous friend Nancy Tanner would stand outside NARAL’s annual “celebration” of Roe v. Wade holding a sign that said, “I Regret My Abortion.” Every year at least a few women heading into this macabre gala would whisper to Nancy that they also regretted their abortions, but they kept that to themselves.

Legal abortion has neither benefited nor protected women but if Justice Ginsburg ever recognized that fact, she, too, kept it to herself. She believed that Roe v. Wade was a bad legal opinion, too broad and overreaching, but she continued to insist that choice was a good thing.

I hope that Justice Ruth Bader Ginsburg rests in peace, that women continue to shatter glass ceilings and that protections for mothers who fervently want to choose life will be written into law. And I pray not only for Roe v. Wade to be overturned but for the day to come in our nation when abortion will become unthinkable.

Janet Morana is the executive director of Priests for Life and the author of Recall Abortion: Ending the Abortion Industry’s Exploitation of Women.