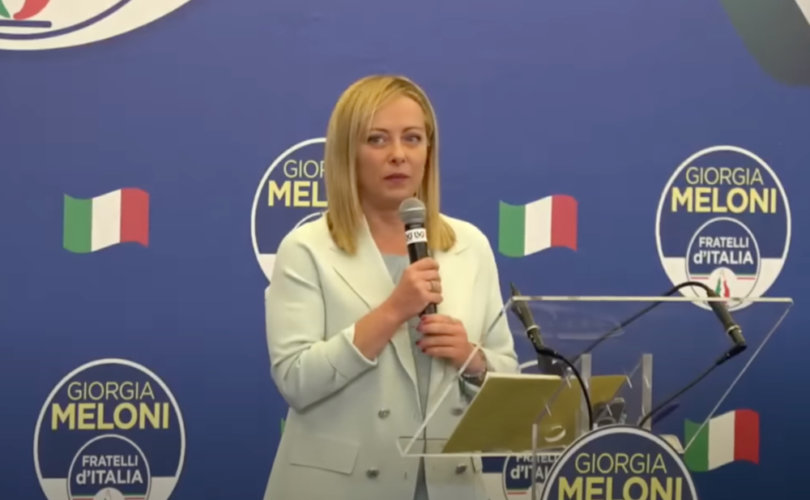 (The Catholic Thing) – If exit polls hold, Italy has elected its first female prime minister, Giorgia Meloni. The usual liberal voices will not be celebrating. Normally, Italian elections are of little interest. Since 1945, there have been seventy Italian governments – almost one a year, which might suggest instability. But Italians often say that the system is too stable.

General elections just reshuffle members of the political class, which rarely change very much. Except maybe this time. A populist Italian prime minister (“extreme right,” “neo-fascist” in the mainstream media, of course) will have significant repercussions for Europe and America, and even the Catholic Church.

A prominent Italian theologian, now living in the United States has argued recently that Meloni’s election may “hurt Francis”: “The campaign has been vulgar and trashy, and all of the substantial issues – from the war in Ukraine to climate change – have been ignored.”

This account of “all the substantial issues,” like much political analysis these days, leaves out a lot. Namely, questions that daily concern most Italians – like crime, out-of-control inflation, and illegal immigration – in a country struggling economically and bewildered, as many Western nations are, by radical social changes, making their country unrecognizable to many citizens.

And Ukraine – about which Francis himself has been an uncertain trumpet – has in fact received considerable attention during the campaign. Italians, like other Europeans, don’t like Putin’s aggression, but are also deeply worried about crushing energy costs – multiple times their recent levels, even now, before winter.

The real problem with Meloni’s election for progressive Catholics appears to be that, “A new government in Italy could very easily strengthen opposition to Francis and severely limit the social and political reception of his pontificate’s core message.”

What is that “core message”?

For starters, openness to massive immigration. Even before “Who am I to judge?” Francis chose to make his first trip as pope to the tiny Italian island of Lampedusa, which is closer to North Africa than Cuba is to Florida.

Thousands of illegal immigrants enter Italy there, after perilous crossings of the Mediterranean – or die trying. Italy is not an ideal destination, especially given the large differences in culture and religion (mostly Islam) of the new arrivals. Large majorities of Italians – and Europeans generally – feel inundated by what are essentially open borders.

The pope occasionally mentions that countries, of course, need to consider how many immigrants they can accommodate. But his “core message” is that Europe should be taking in far more.

There’s a real debate to be had about this; and it may now actually occur, if a right-oriented government has indeed come to power in Italy.

Secular Europe still accepts the Christian notion of “welcoming the stranger,” a moral principle that carries no little weight. But there’s a difference in both principle and practice when strangers arrive in the millions and place heavy burdens on peoples and cultures – which have their own problems and claims to consideration.

The UK left the European Union in part over immigration. Hungary and Poland have adopted policies (as perhaps Italy will now as well) aimed at preserving national identity, which European elites dub xenophobia and Islamophobia. Even France seems headed in that direction. Some churchmen (Francis among them, it appears) regard calls to limit immigration as mere greed, selfishness, and callousness.

— Article continues below Petition —
Stand with pro-life Catholic dad of 7 raided by Joe Biden's FBI
Show Petition Text
6774 have signed the petition.
Let's get to 7500!
Thank you for signing this petition!
Add your signature:
Show Petition Text

It’s not that simple, however, as we know in America, when our poorest citizens and illegal immigrants compete for jobs and resources.

Europe has just witnessed another stunning political development: liberal Sweden has elected a populist/conservative government, “a new far-right surge” according to The Washington Post, but in reality ordinary Swedes reacting to soaring crime, hundreds of Islamist bombings, and the highest incidence of rape in Europe

But European populism isn’t only about immigration. It also involves the “culture war,” something Francis has studiously tried to tamp down.

Ursula von der Leyen, president of the European Commission, recently warned that the European Union has “the tools” to deal with Italy if “things go in a difficult direction.” Even heads of Italy’s liberal parties felt obliged to remind the EU “not to enter into Italian affairs,” as one put it.

Von der Leyen mentioned how those “tools” (mostly withholding EU funds) were being used  against Hungary and Poland, not solely because of their immigration policies (Poland has generously absorbed tens of thousands of Ukrainian refugees, almost all Christians, for example), but because of their support for traditional families, advocacy for more children and national identity, and – perhaps the sorest points for the EU – efforts to limit abortion and LGBT+ propaganda directed at young children, all tagged as tending towards “fascism.”

Meloni, however, is a poor candidate for the label. A Tolkien enthusiast who sees her work as protecting the Shire – i.e., Italy – she’s said, “I consider power very dangerous. . .an enemy and not a friend.”

She’s been cagey about abortion – willing to tolerate existing Italian law, but wanting to reduce abortion – this in a country where many medical professionals already refuse to be involved in abortion on conscience grounds. Her coalition will clearly favor more traditional social policies (they’re already talking about “parental rights”), something that triggers the international elites who have come to consider their own extreme positions on abortion, gays, and trans people as moral imperatives.

Pope Francis has spoken about abortion as like “hiring a hitman” and gender theory as a kind of Western cultural imperialism. At the same time, he has been quite indulgent towards pro-abortion politicians, and homosexual and trans groups. He has no stomach for the kind of culture skirmishes needed to make a difference.

As a non-Italian, it would be hard for him to criticize a political coalition that enjoys broad public support. The Italian bishops themselves will now be in a difficult spot between papal preferences and popular sentiment. It will be interesting to see if they can all get past the slurs about “fascism” and help Europe come to grips with a populism that is not without its perils, but has its reasons – a challenging new sign of our times.