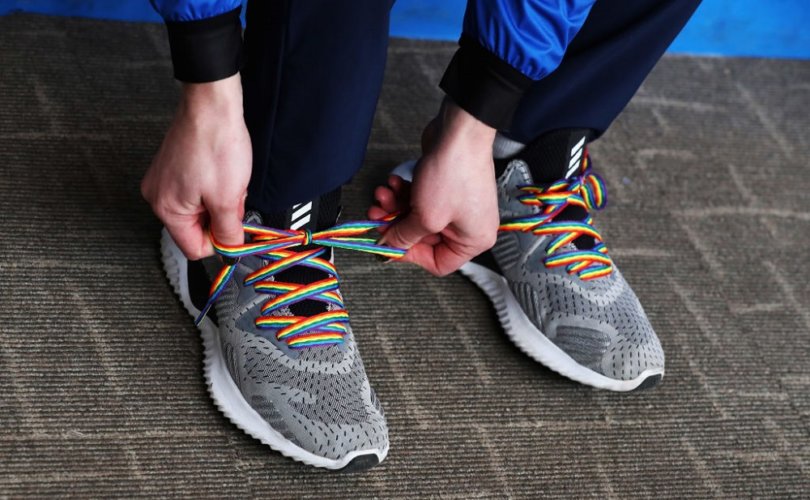 Starting on Tuesday, December 3, all English Premier League soccer clubs will be designating a match to promote LGBT activism with the so-called “Rainbow Laces” campaign.

In 2019, as in prior years, the English Premier League will bend the knee to the LGBT agenda.

The campaign will include 1) rainbow laces and captain arm-bands      available to players and referees, 2) rainbow-colored handshake and substitute boards, and 3) a rainbow colored pitch flag. Also, the League’s social media platforms will use a rainbow-colored logo.

But is the use of rainbow colors appropriate for sporting competitions, and should players, game officials, and clubs be forced to endorse political positions that contradict many people’s personal beliefs and faith?

The “Let All Play” initiative, founded by Jennifer Bryson, answers these questions and others, stating that politics and sport shouldn’t mix.

Where soccer is concerned, Let All Play cites FIFA rules, stipulating that “[e]quipment must not have any political, religious or personal slogans, statements or images” (Laws of the Game, Law 04.5).

And again, in relation to the coercion of players in the promotion of a political agenda:

Persons bound by this Code shall protect, respect and safeguard the integrity and personal dignity of others[.] … Threats, the promise of advantages and coercion are particularly prohibited. (FIFA Statutes, Article 23,1/5)

Let All Play just issued a press release asking the English Premier League to reconsider “Rainbow Laces” week as counter-productive to freedom of conscience, religious freedom, and dialogue generally among those who disagree about using sports to promote a political agenda.

In particular, Stonewall produced a poll that showed that 43% of people claiming LGBT status feel unwelcome at public sporting events.

Unfortunately, this highly subjective claim has been accepted by the Premier League and its clubs, as though they believe they are somehow to blame.

Of course, there are no barriers — legal, social, or otherwise — to homosexuals or gender-confused people attending soccer matches or other sporting events.

Nevertheless, Robbie de Santos, Stonewall’s director of sport, was adamant, saying: “We can’t just rely on LGBT people to make sports more inclusive — we all have to play our part. While wearing a simple shoelace might seem like a small gesture, for LGBT people it’s a powerful symbol of acceptance.”

Here’s the rub to the whole promotion of the LGBT cause: accepting people who practice a homosexual lifestyle, does not, in the same instant, mean we all must accept, as normal and right, the promotion of homosexuality and transgenderism.

And, as Let All Play has stated, there are other ways, which sporting bodies have at their disposal, to address any problems with breaches of decorum and dignity facing minority groups, including those people who identify as homosexual.

It is good that FIFA has and exercises mechanisms to counter the problem of degrading treatment, such as chants, against those who identify as homosexual[.] … Through exercise of such mechanisms, FIFA can continue its efforts to end discrimination based on sexual identity without fostering new forms of discrimination such as discrimination against people with particular political viewpoints or religious beliefs … in requiring all players to wear the political LGBT rainbow on the kit.

If some people feel uncomfortable attending sporting matches, specifically because of their aberrant sexual practices — which no one else in the stadiums or arena cares the least about — is it really the clubs’ duty to facilitate the normalization of those sexual practices?

Because that is what this is really about: the Premier League and its clubs are being used to promote the normalization of homosexuality and transgenderism.