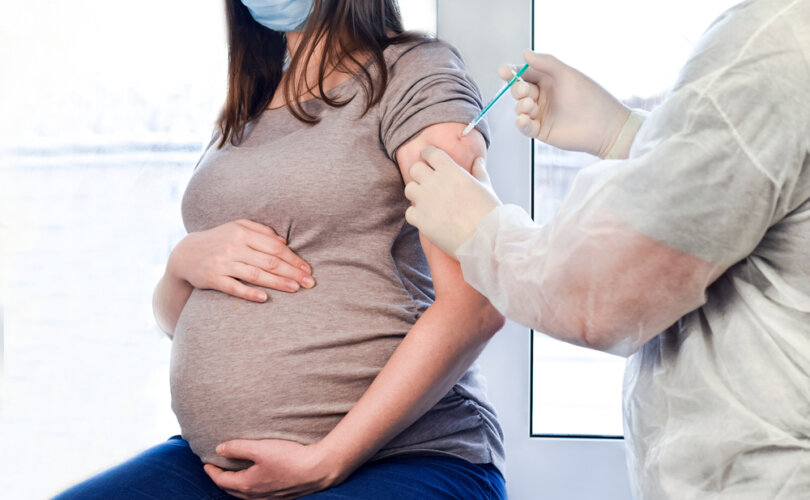 (Robert Malone) — This is the greatest disaster in the history of obstetrics and all of medicine.

I testify that this unwarranted, experimental gene therapy was never indicated in pregnancy and was perpetrated unlawfully and with falsified data. Res ipsi loquitor: the facts speak for themselves.

It was known by Schàdlich et al as early as 2012 that lipid nanoparticles (LNP) concentrate in the ovaries of mice and Wistar rats. The Freedom of Information Act (FOIA) request of the Japanese Pfizer biodistribution studies confirmed that within 48 hours the “vaccine” was immediately absorbed into the bloodstream and concentrated in the ovaries 118-fold, and the trajectory would have risen even higher had the animals not been sacrificed at 48 hours. This experimental therapy may have permanently damaging effects on the human genome for multiple generations, or into perpetuity, and makes diethylstilbestrol pale in comparison.

It was incumbent upon the stakeholders to have excluded long-term effects prior to rolling this novel experimental gene therapy out. There is a long-standing golden rule to never allow unknown substances to ever be used in pregnancy.

A preborn baby girl near term-limited (gametes or germ cells) will have only one million ova (eggs) for her entire lifetime. Men’s gametes (sperm) are continuously produced throughout life with estimates of over 20 million per hour. As argued in 2020, COVID-19 inoculations were never necessary for pregnancy because there were ample data demonstrating that alternate therapies were available. Unfortunately, this truthful long-standing evidence was suppressed, altered, buried, and villainized by the medical-industrial complex for the sole purpose of paving the way for a lucrative experimental gene therapy masquerading as a “vaccine.”

The narrative that the vaccine must be pushed in pregnancy is supported by many experts in part because of the long-held belief that pregnant women have diminished immune function to accommodate the fetus and are thus at much greater risk of dying from viral pneumonia. Maternal fetal medicine physician Beth Pineles in 2021 documented that pregnancy does not predispose a woman to morbidity and mortality from viral pneumonia but lessens the risk.

Not only do the biodistribution studies document the disastrous concentration of the LNP in the ovaries adjacent to the precious and limited ova – the life of all our future generations – but it also concentrates in the thymus gland in fetal life, potentially rendering permanent harm to the “seed of the immune function for life.”

Alexandra Latypova, a pharmaceutical whistleblower, has testified (here and here) that the industry knowingly and purposely falsified and hid damaging data from the public in their reproductive toxicology studies. She provided internal documents with birth defects including rib abnormalities in animal fetuses, a condition in humans that could lead to lethal skeletal dysplasia.

“They accepted fraudulent test designs, substitutions of test articles, glaring omissions and whitewashing of serious signs of health damage by the product, then lied to the public on behalf of the manufacturers” stated Latypova. The damning Pfizer 5.3.6 post-marketing research documented unparalleled deaths after the “vaccine” in 1,223 patients (page 7) in less than 90 days. By all other historical standards the serum should have been immediately removed from the market in December 2020. Pfizer attempted to block this release for 75 years but failed. The Swine Flu vaccine was immediately removed from the market in 1976 after only 26 deaths and a few cases of Guillain-Barré syndrome.

Pfizer 5.3.6 data absolutely proves the extreme danger of COVID-19 inoculations in pregnancy on page 12. Of the 270 pregnant women given the vaccine, 46percent (124/270) had complications after vaccination (page 12) of which 75 were deemed “serious” and 49 “non-serious.” Page 12 also describes “abortions,” “foetal death,” “foetal growth restriction,” “prematurity,” “premature rupture of membranes,” “neonatal death,” and complications in 17/116 newborns having breastfed after a maternal “vaccination.”

Albert Benevides, the worldwide Vaccine Adverse Event Reporting System (VAERS) expert, documented at least six newborn deaths occurring after mothers received the “vaccine” while breastfeeding. The U.S Centers for Disease Control and Prevention (CDC) uses multiple tactics to diminish the astonishing death and destruction from VAERS associated with COVID-19 inoculations and reviews a variety of tactics that VAERS has used to hide and throttle these adverse outcomes (here, here, and here). Newly “vaccinated” mothers’ breast-fed babies have suffered from a variety of complications including thrombotic thrombocytopenic purpura and severe “atypical Kawasaki syndrome.” At least one newborn death meets the Bradford Hill Criteria for causation with rapid deterioration to death after the first feed in a newly vaccinated mother.

There is extensive documentation of potential fraud, collusion, and RICO violations reported by numerous experts. There were 1,366 peer reviewed publications in just 15 months documenting severe complications and death after the vaccine. Let that sink in. The peer-reviewed publications of COVID-19 “vaccine” adverse events in just 18 months far exceed those published from all other inoculations, all over the world in all of the past century.

The NEJM Shimabukuro article pushing the safety of the vaccine in June of 2021 is flagrantly false and manipulated to bury an 82 percent miscarriage rate, a rate that rivals the abortion pill RU486 also known as Mifepristone.

Mifepristone carries a black box warning by the FDA and yet the stakeholders are pushing this experimental therapy in pregnant women. The unprecedented false villanization of extremely safe and effective drugs is well established by completely falsified publications in the Lancet by Mandeep Mehra, by Shimabukuro NEJM, and many others falsifying manipulated data to take out extremely cheap, safe, and effective repurposed drugs including hydroxychloroquine and ivermectin. “COVID-19 and the Unraveling of Experimental Medicine” destroys the false narratives of the medical-industrial complex that have killed for profit and is published in a three-part series: Part I, Part II, and Part III.

The British government advocates against the use of the COVID-19 “vaccine” in pregnancy and breastfeeding mothers and has remained steadfast in this stance. Using a classic tactic, the U.K. government underhandedly “buried” this recommendation deep in a sea of useless information. A brilliant strategy since their government website will provide plausible deniability of liability if future litigation ensues:

In the context of supply under Regulation 174, it is considered that sufficient reassurance of safe use of the vaccine in pregnant women cannot be provided at the present time: however, use in women of childbearing potential could be supported provided healthcare professionals are advised to rule out known or suspected pregnancy prior to vaccination.

Multiple independent experts have published on the severe adverse effects of the “vaccine” in pregnancy and in the VAERS report (here, here, here, here). Our recent publication documents unequivocal danger signals from the VAERS report using the Influenza vaccinations over the past 284 months as a control group compared to that of the COVID-19 “inoculations” in just 18 months. Proportional reporting ratios (PRR) far exceed the CDC and FDA danger signal of 2 in this study as follows:

Over 30 other independent sources are consistent with this data, even worse, consistent with Albert Benevides proof that the authorities are throttling and manipulating VAERS data to lessen the visibility (see the list below). These sources include U.K. Yellow Card reporting, the European Medicines Agency’s EudraVigilance, the World Health Organization’s VigiAcces, and the World Council for Health.

A nurse whistleblower from California has formal, incontrovertible evidence in an email received from the nursing administration of Women’s Services documenting a massive spike in the number of fetal deaths (stillbirths) that began after the vaccination push in pregnancy. In July 2021 there was an all-time institutional record at 22 stillbirths that required a significant diversion of the nurses’ clinical responsibilities. There were again 22 more stillbirths in August 2022 and, as the administrator stated, that does not include other stillbirths that likely were left out as they came into different departments, e.g., emergency departments, offices, or operating rooms. It is difficult if not impossible to implicate COVID-19 illness as a cause of stillbirth since the national rate of fetal death (stillbirth rate) declined in 2020 compared to the aggregate three previous years of 2017, 2018, and 2019 (5.83 versus 5.74 per 1000 births, p>0.10). Yet the 22 stillbirths in the community in California served by two hospitals with about 9000 deliveries per year would be equivalent to a rate of 29.3 stillbirths/1000 births. Assuming a standard deviation is in the range of 0.5 stillbirths/1000 births, this would represent a “40 sigma” event which cannot be explained by random occurrence.

Three other Canadian whistleblowers documented a substantial surge in the stillbirth rates in three separate geographic locations in 2021, as seen in the three graphs below. The data were compiled from multiple whistleblowers in Canada. The hospitals and Canadian government have not been forthcoming in providing clarity with their vital statistics.

The CDC admitted that it has not been transparent with the data which is obvious since the organization has still not acknowledged the presence of the Pfizer 5.3.6 or released the V-Safe data. They have hidden this data from worldwide citizens and are thus responsible for killing and injuring tens of millions. The most accurate medical database in the world, the military DMED database, showed disastrous effects of the “vaccine” in pregnancy as reviewed by Sen. Ron Johnson. The CDC tried to hide its V-Safe (smart phone) data that could be easily manipulated, as used in the Shimabukuro NEJM. The CDC is attempting to hide V-Safe data because of how damning it is: 7.7 percent of the 10.1 million participants required a visit to the hospital or medical provider and another 25 percent missed work or school or had a vaccine complication. In the ultimate display of irony, the creator of V-Safe died suddenly just one month after his second COVID-19 “vaccine.”

This is a disaster of unparalleled proportions. I have reviewed the frightening drop in birth rates in countries all over the world since the rollout of the “vaccine.” “COVID-19 and Disaster Capitalism – Part I” outlines the playbook of the medical industrial complex to game the system, thus producing a new pandemic billionaire on a daily basis since the onset of the pandemic.

Reprinted with permission from Robert Malone.