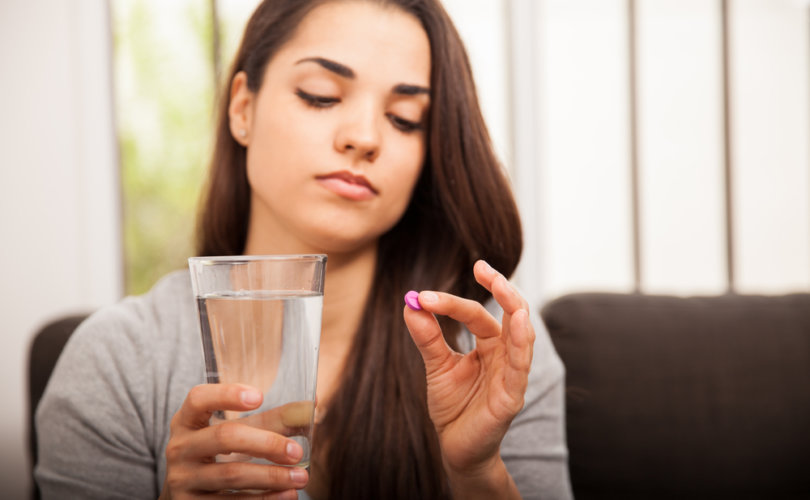 June 20, 2016 (LiveActionNews) — Abortion advocates are running a con on the American people. “We don’t have to justify our opposition to any and all restrictions on abortion,” they say, “because those aren’t the most effective way to reduce abortions anyway. Instead, we need to promote more contraception in schools, social programs, and the workplace.”

Awfully convenient how the “real” silver bullet to abortion just happens to be something else the abortion industry is financially and ideologically invested in, isn’t it?

Longtime readers know the evidence shows the promise of contraception to end abortion is wildly overstated, as well as the other reason why it’s a scam: because several prominent contraception methods function as chemical abortions anyway. At Glamour, Jennifer Gerson Uffalussy tries to mislead readers on the potentially abortive nature of Plan B, also known as the morning-after pill…

Plan B prevents pregnancy by postponing ovulation, which means sperm does not come into contact with or fertilize an egg. In fact, every major medical institution, including the Food and Drug Administration (FDA), states unequivocally that Plan B and other types of emergency contraception are forms of birth control, and they cannot induce an abortion if a person is already pregnant.

As a general rule, it’s pretty safe to assume that the opposite of whatever someone from Planned Parenthood says about a contentious subject is true.

Plan B can function by preventing fertilization, but suggesting it always does is a lie. Depending on when it is taken, Plan B can also function after fertilization, killing an already-conceived embryo by blocking him or her from implanting. In an extensively sourced, step-by-step explanation of the science, Dr. Donna Harrison shows that Plan B induces “luteal-phase defect,” the “term for when the ovary does not produce enough progesterone to allow the embryo to survive”:

If Plan B is taken five to two days before egg release is due to happen, the interference with the LH signal prevents a woman from releasing an egg, no fertilization happens, and no embryo is formed. Current studies do not demonstrate a harmful effect on the embryo if Plan B is taken after egg release.

Many authors focus on these two facts to make the sweeping claim that Plan B has no effect on a human embryo. What they are forgetting is Plan B’s effect at step 3, the two-day window in which embryos can form but positive pregnancy tests don’t occur. That’s the window during which the studies mentioned above suggest that Plan B has a likely embryocidal effect in stopping pregnancy.

Harrison also points out that Plan B defenders’ own story on whether it’s abortifacient changes back and forth for the sake of convenience:

If you read [Princeton contraception researcher James Trussell’s] previous research papers, sometimes he claims over 90 percent efficacy from Plan B, and sometimes he claims around 50 percent efficacy. Why these differences? Well, as he so readily admits, you can’t get numbers of 90 percent efficacy without some sort of post-fertilization effect. So when the issue of mechanism of action is raised, suddenly the efficacy for Plan B gets “adjusted” to what would be expected from a drug with no post-fertilization effect. But, when issues of funding arise . . . well Plan B becomes much more effective.

Uffalussy and McDonald-Mosley’s own words – “stops pregnancy from happening,” “cannot induce an abortion if a person is already pregnant” – hint at the sleight-of-hand they’re hiding behind, although one has to be well-versed in the differences between how pro-aborts redefine words versus their actual meaning.

In 1965, the heavily-politicized American College of Obstetricians and Gynecologists redefined “conception,” the start of pregnancy, from the beginning of the child’s existence at fertilization to the point when the embryo is implanted—and they did so not based on science, but at the urging of Planned Parenthood “experts” who knew the change would make birth control more culturally palatable. Therefore, today pro-aborts can just say Plan B works before “pregnancy” and leave people to mistakenly infer no baby is present yet.

However, ACOG wasn’t able to override common sense and medical judgment completely—James Agresti quotes five medical texts declaring that pregnancy begins with fertilization, Merriam-Webster simply defines pregnancy as “the condition of a woman or female animal that is going to have a baby or babies,” and a 2011 survey of over a thousand OB/GYNs found 57% agreeing that pregnancy begins at actual conception, as opposed to only 28% for implantation.

Unfortunately, as the old saying goes, “A lie gets halfway around the world before the truth has a chance to get its pants on.” Publications like Glamour will continue to repeat the con no matter how many times pro-lifers expose it, comfortable in the knowledge that many will wrongly assume a mainstream lifestyle magazine doesn’t have a political agenda. We have our work cut out for us.