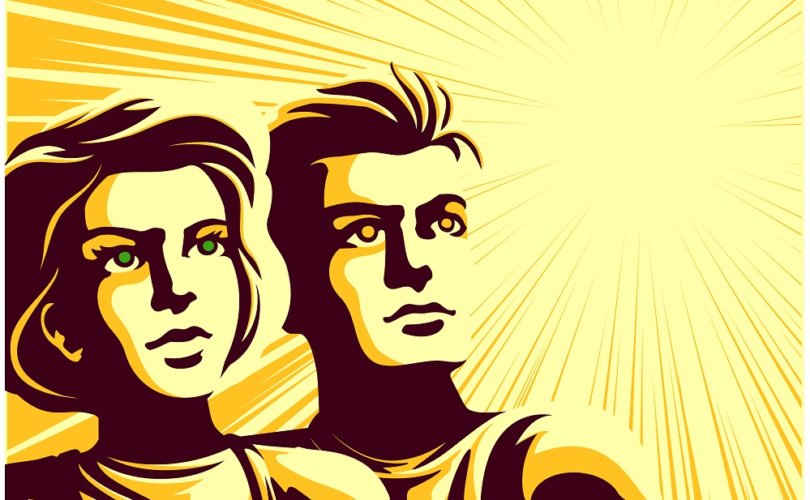 August 19, 2019 (American Thinker) — Representative Alexandria Ocasio-Cortez has been mocked for calling climate change “our World War II.” But America in 2019 does face a serious challenge to freedom and self-rule: radical progressivism. The progressive roots of national socialism and fascism are well known to all but modern Democrats, who also are curiously ignorant (or pretend to be) of the rather sordid history of their party. This is why one finds so many similarities in the philosophy, goals, and tactics of the Nazis and our current mob of progressive fascists.

From the stultifying political correctness promoted by academia (more and more within K–12, as well as universities) to the über-hypocritical leftist politicians and the media who provide cover for them to the increasingly violent modern Brown and Black Shirts (i.e., “Antifa“) and their active attempt to substitute Doublespeak for the English language, the totalitarians of today's political Left want precisely what Hitler pursued: absolute power and uncontested control of every aspect of life of those people over whom they seek to rule. This is why they project onto Donald Trump — who stands squarely and loudly against their anti-American agenda — the very evils (racist, fascist, lawless, etc.) that they embody.

It is noteworthy that the vehemence of the various attacks on the president from leftists and de facto leftist NeverTrumps (yes, any erstwhile conservative who proclaims that he will vote for any of the current crop of Democrat presidential candidates over Trump is in fact supporting radical progressivism) is inversely proportional to the evidence supporting those claims. The current outrage over Trump's tweets regarding the “squad” and the inefficacy of Elijah Cummings in bettering the lives of his most vulnerable constituents is a case in point. As some commentators have noted, with his provocative tweets and commentary, Trump is succeeding in branding today's Democratic Party as the home of far left extremists with only the most tenuous grasp of reality.

Yet for those who rightly find ridiculous the claims of congressional starlet Alexandria Ocasio-Cortez and her ilk that battling climate change is this generation's World War II, the favorable comparison of the essential character of and challenges confronting Winston Churchill in his war years with those of Donald Trump today, may seem hyperbolic at best. Yet there indeed are grounds to argue that Donald Trump is working every day to emulate Churchill in at least this way: by exposing and repudiating the radical progressive agenda and the danger it holds for the country, he is working hard to make it intolerable to the American people.

Whereas the various hysterias of the Left are driven wholly by their self-referential imaginings, Churchill faced and Trump is facing the all too real threats generated by a pernicious and stubbornly persistent ideology, then and now.

In a recent issue of First Things, editor R.R. Reno marked the passing of the Hungarian-American writer John Lukacs. In his review of Lukacs's life and works, Reno includes many of the writer's memorable observations and ideas, among the most striking of which is this one: “'Intolerable' is what people no longer want to tolerate: in other words, when they begin to think or say that this or that must not be tolerated.” Reno goes on to note Lukacs's admiration of Winston Churchill, a man who perhaps better than any other in the late twentieth century understood that simple truth.

As the armies of Nazi Germany swept over Belgium and France, Churchill, through his formidable oratorical and leadership skills, made submission to Hitler simply intolerable for the British people. Importantly, as the award-winning film The Darkest Hour masterfully depicts, Churchill's clarity and resolve were actively resisted by the very parliamentary elites (think NeverChurchills) who had enabled Hitler's aggression — resisted, that is, until it became politically impossible to do so.

Although Churchill fought an all-out shooting war that threatened the survival of his country, Trump's battle against anti-American leftist institutions and demagogues is also existential in a very real sense. If the trajectory and rate of acceptance of the progressive worldview is not halted and indeed reversed — and soon — it will be either goodbye, America, hello, Venezuela, or a shooting war of our own. Donald Trump sees this clearly and has just as clearly accepted the challenge of ensuring that “America will never be a socialist country.”

Just as in 1940–41, when it was far from certain that Churchill would ultimately be effective in stanching the march of the Nazi war machine, so it is yet to be seen whether Trump will succeed in decisively defeating the anti-American forces arrayed against this country by the modern Left. Despite the torrential denunciations and elaborate plots deployed against him by his — and our — political enemies, he remains undeterred and fights on. This impressive resolve should encourage and motivate like-minded defenders of America to support our president in every way possible.

Physical intimidation and subjugation over a society can be temporarily levied but ultimately can endure only as an effective means of control if mental and spiritual subjugation (which can only be self-imposed) first takes hold of a society. This willing acquiescence to evil is what Churchill in his day and Donald Trump in ours understands must be fought against — that any voluntary submission to the totalitarian ambitions of radical leftists must be always and everywhere intolerable to any people who consider themselves and wish to remain free.