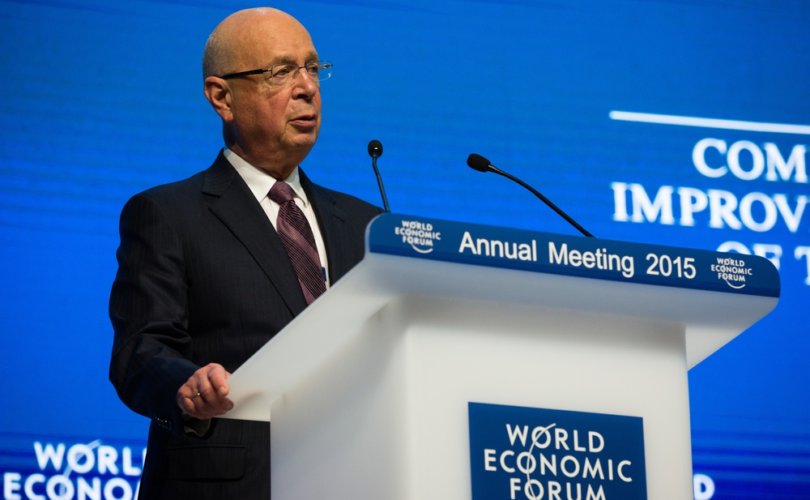 (LifeSiteNews) — For a forum nominally devoted to it, the World Economic Forum has provided little insight this year into solutions to a mounting economic crisis in Europe.

It has furnished us with its own vision of a post-human future, which is happily experiencing technical difficulties due to the “hyper-polarized, hyper-partisan time” in which we now live.

In remarks which have been predictably described as “fueling conspiracy theories,” Pakistan’s Foreign Minister Bilawal Bhutto Zardari referred to the WEF’s project of building a “new world order.” The house rules of Western journalism appear to dictate that any quotation of the stated aims of the WEF are the product of feverish imagination.

“Here at WEF we’re discussing what the New World Order will be.” pic.twitter.com/JoWixEyY9N

With the WEF’s annual summit now having concluded, it may be time to consider what else this forum had to offer.

Firstly, the “hyper-partisan” world to which Zardari refers is that which is rapidly replacing the unipolarity led by the USA. A multipolar world is emerging from the economic stress and diplomatic chaos around the war in Ukraine, which has seen U.S. influence in the Middle East diminishing from Saudi Arabia to Syria.

A multipolar world with a competing economic bloc in BRICS – Brazil, Russia, India, China and South Africa – is one in which it will prove very difficult to realize any global project of total surveillance and control. That of the WEF itself appears to be halted by this global realignment, which saw many world leaders fail to attend Davos for the first time in years.

China, Russia, the USA, the U.K., France, Brazil, Saudi Arabia and Turkey are but a few of the many nations whose leaders did not attend. The USA sent haunted tree John Kerry, whose comments may explain why this select group has diminished in number – it is reserved for people like him – who have been touched by aliens.

Last year a Swiss publication asked whether the WEF can stop “de-globalization.” The answer from 2023 appears to be “no.” This bodes well for anyone outside the technocratic dystopias imagined for our future such as that of the World Health Organization pandemic treaty.

The WHO’s director, Tedros Gebreyesus, has presumably enjoyed the other-worldly encounter which motivates the Davos devotees. He did attend the forum, with no mention made of his being accused of war crimes during his tenure as health minister in Ethiopia. The proposed WHO treaty, due to be ratified in May 2023, requires a simple majority of world nations to pass. It seems very unlikely that consensus can be reached, in a world resolving into antagonistic factions, on measures which will dissolve national sovereignty.

The Forum appears to be largely a platform for politicians and other state-level performers to showcase themselves. Polish President Andrzej Duda used the occasion to question whether Ukraine will survive the current crisis. Speculation has arisen over Polish mobilization of its army reserves, which may, together with its strong commitment to send Leopard 2 tanks into Ukraine, betoken an interest in recapturing former Polish possessions in Western Ukraine following partition.

Mrs. Yelena Zelenksy of Ukraine – the president’s wife – made an appearance to shame nations such as Germany into supplying more money and weapons. The Germans, in an encouraging attack of sanity, appear to be very reluctant to inflame the war in this way, and have so far refused to send their best armor to Ukraine.

European Union Commission President Ursula von der Leyen was of course keen to appear in a photo opportunity with the first lady of Ukraine. The hunger for public exposure combined with the impression of global influence is explained by the seemingly unarrestable decline of the EU’s economy. The Union’s share of global GDP has continued to shrink, having halved since 1980 in terms of purchasing power.

The fact that this is not in the news in the world’s economic forum says more about the true function of Davos. It appears to be a platform for the fantasies of the power-crazed, which are thankfully being undermined by their detachment from reality. To better articulate this derangement, this year the WEF provided a kind of musical interpretation of the Spirit of Davos whose delivery and content was appropriately as bizarre as it was awful.

What is this #WEF? 😂 pic.twitter.com/cTJekjOuzt

The Forum has become a shop window for the staging of unconvincing performances. Outside the meeting halls, another unedifying spectacle was arranged for the cameras in Greta Thunberg’s heroic denunciation of a movement which shares most of her opinions.

One person who was absent was Ukrainian President Volodymyr Zelenksy himself. He did, however, make time to address the WEF by video to deliver a 10-point peace formula which turns out to be an invitation to start a world war. Before going on to express doubt over whether President Vladimir Putin of Russia was still alive, the former television comedian Zelensky made repeated appeals for the West to escalate their intervention in the conflict.

His messaging appears to have been affected by the recent departure of his chief of propaganda, Alexei Arestovich. Formerly one of his closest aides, Arestovich resigned following his revelation that an apartment block in Dnipropetrovsk had been bombed not by the Russians, but by Ukraine.

His remarks were followed by an interview in which admitted that Ukraine is unlikely to win the war and may not survive it. This is remarkable news from the decorated former Strategic Communications Advisor to the President of Ukraine, who was accused of committing high treason for telling the truth.

Zelensky is not the only leader to lose a key aide. This week saw reports that Ron Klain, Joe Biden’s chief of staff, plans to step down soon. Together with the announcement of a special counsel to investigate documents which detail Biden’s dealings in Ukraine, these developments suggest that exit from the proxy war may be in sight for the U.S.

One explanation of the sudden and fortuitous discovery of the Biden documents is that the president himself is being maneuvered to shoulder the blame of what appears to be a major policy failure in the making.

The past week has been rich in news, if poor in economic forecasting. Most of this news has not been pleasing to the would-be masters of the future at the WEF. In this regard, I think we can say that the decline of its power – and that of other bad actors – into bathos has been a tremendous success for us all.