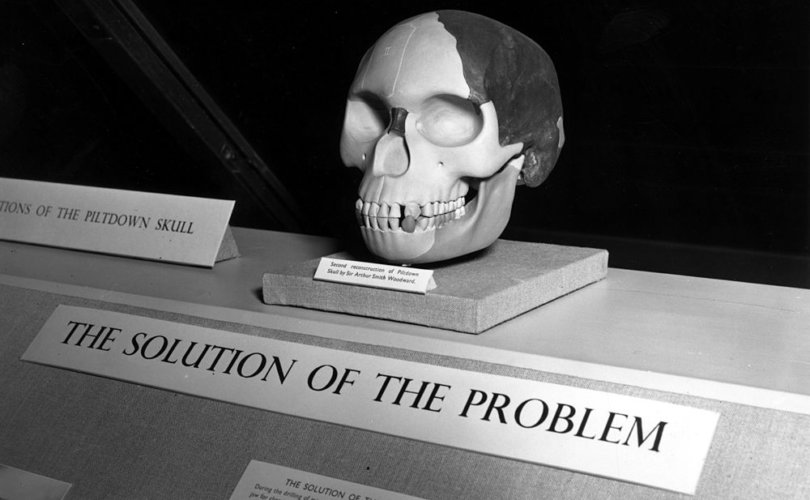 Reconstruction of the Piltdown skull in the Natural History Museum, London.Reg Speller/Getty Images

(LifeSiteNews) — Even in the face of compelling evidence for special creation, those indoctrinated in human evolution will often insist that the fossils contain overwhelming evidence for the “fact” of human evolution. In his recent masterpiece The Fall of Darwin’s Last Icon, author and researcher John Wynne has put the final nail in the coffin of the hypothesis of human evolution by showing that all of the evidence for human evolution can be assigned to one of three categories: “ape,” “human,” or “make believe.” In his thorough examination of all of the fossil evidence for “missing links” between apes and humans, Wynne shows that G.K. Chesterton’s observation is as true today as it was when he offered it a hundred years or so ago: “The only thing that we know about the ‘missing link’—is that it is still ‘missing’.”

Wynne examines every one of the principal alleged “missing links” between apes and the first humans who allegedly “evolved” in East Africa.  Readers will remember the expensive exhibits at natural history museums around the world inviting the public to “Meet Lucy Your Ancestor.” In at least one prominent exhibit, Lucy was displayed with human feet, even though no complete skeleton of Lucy had been found, and her anatomy was that of a knuckle-dragging Austalopithecine ape. The Laetoli footprints found near Lucy’s remains were indeed fully human, but they only served to prove that homo sapiens and Lucy existed at the same time—a problem that the advocates for an ancestral Lucy conveniently solved by equipping her skeleton with human feet. And yet—as recently as 2009—Scientific American was touting Lucy as a bona fide human ancestor!

Scientific American’s advocacy for Lucy as a human ancestor in 2009 was already contradicted by the verdict of Charles Oxnard, described by Stephen Jay Gould as the “leading expert on the quantitative study of skeletons.” As Wynne explains:

Multivariate studies of several anatomical regions, shoulder, pelvis, ankle foot, elbow and hand are now available for the australopithecines…the common view, that these fossils are similar to modern man or that…they resemble the African great apes, may be incorrect.  Most of these fossil fragments are in fact, uniquely different from both man and man’s nearest living genetic relatives, the chimpanzee and gorilla.  To the extent that resemblances exist with living forms, they tend to be with the orangutan.

…however able these creatures were at walking on two legs, they were also convincing quadrupeds and perhaps excellent climbers…they must have been upon some side-path that did not lead to human-like functions…the australopithecines …are now irrevocably removed from a place in the evolution of human bipedalism, possibly from a place in a group any closer to humans than to African apes and certainly from any place in the direct human lineage. [emphasis added]

In The Fall of Darwin’s Last Icon, John Wynne systematically exposes the fatal flaws in all of the arguments put forward for the principal “missing links” between apes and humans, showing that, in the end, all of the fossils can and should be categorized as “ape,” “human,” or “make believe.”

Scientific American’s current campaign against an alleged creation-based legacy of racism conveniently suffers from total amnesia in regard to the journal’s own long history of advocacy for a pseudo-scientific evolutionary basis for “white supremacy.” In January 1913, the journal featured an article on the discovery of Piltdown Man. According to Scientific American:

In Piltdown Common, Sussex, England, an English paleontologist, Mr. Dawson, discovered, about a year ago, a fairly complete human skull representing the most ancient relic of the human race in the British Isles, and one of the oldest found anywhere. The Piltdown skull might be said to stand about half way between the gorilla and modern man—neglecting the fact that the gorilla is more massive in body than man. Nevertheless, the Piltdown skull represents a considerably higher type, it seems, than the Neanderthal race, which has a much more slanting forehead. It appears, therefore, that at least one very low type of man with a comparatively high forehead was in existence in western Europe long before the low-browed Neanderthal man became widely spread in this region.”

The New York Times echoed this report on Piltdown Man with the modest headline, “Darwin Theory is Proved True”—not “supported,” “substantiated,” or even “confirmed”—but “proved true”! Not surprisingly, Clarence Darrow’s defense team brought a plaster cast of this “proof” of man’s descent from the apes to the infamous Scopes Trial in 1925. True to form, Scientific American threw all of its journalistic weight behind Clarence Darrow and the agents of enlightenment in their secular jihad against the “fundamentalists” and their alleged crusade to “curb the teaching of science.” Fifty years after the Scopes Trial, Scientific American celebrated the victory of the forces of light over the forces of darkness:

A century ago the educated world was shaken by the discoveries of Charles Darwin and Alfred Russel Wallace, and the evidence they presented for the evolution of life on this planet. In 1959, as we celebrate the centenary of the Origin of Species, few informed persons, if any, question the theory of evolution. However, the century has witnessed several attempts to stimme investigation and outlaw the teaching of the theory. The best known of these was the Scopes trial, held in Dayton, Tenn., in 1925. The trial resulted in an immense revival of public interest in Darwin and in evolution; there has been no comparable effort since then to suppress this advance in man’s understanding of himself and the world he lives in.

To understand the trial and what lay back of it, one must recall the climate by Fay-Cooper Cole of the 1920s. It was a time of uncertainty, unrest and repression. We had just emerged from a world war. Old standards were badly shaken; the young were labeled “the lost generation”; intolerance was rampant. The Ku Klux Klan was on the march, not only in the South but in the North as well. In many towns in Illinois, Indiana and other parts of the Midwest, staid business men-even members of the clergy-put on “white nighties” and burned fiery crosses to put the Negro, the Jew, the Catholic and the immigrant “in their places.” The Fundamentalists, under the leadership of William Jennings Bryan, had organized in some 20 states and were putting pressure on all institutions of learning to curb the teaching of science, particularly evolution, which they considered in contradiction to the Bible. Prohibitive bills had been passed in Tennessee and Mississippi and were pending in six other states.

What seems to have been conveniently forgotten by the editors at Scientific American is the way that the evolutionary textbook at the center of the Scopes Trial litigation characterized the “varieties of man” in relation to the “highest type of all” in the evolutionary hierarchy. As reported in Natural History magazine:

The evolutionary textbook in the Scopes Trial said about “Races of Man”:

At the present time there exist upon the earth five races or varieties of man, each very different from the other in instincts, social customs, and, to an extent, in structure. These are the Ethiopian or negro type, originating in Africa; the Malay or brown race, from the islands of the Pacific; The American Indian; the Mongolian or yellow race, including the natives of China, Japan, and the Eskimos; and finally, the highest type of all, the caucasians, represented by the civilized white inhabitants of Europe and America. (emphasis added)

The biology textbook promoting evolutionary racism was/is Civic Biology.  Henry Fairfield Osborn was a professor of biology and zoology at Columbia University. For twenty-five years (1908-1933), he was President of the American Museum of Natural History’s Board of Trustees. He wrote:

The Negroid stock is even more ancient than the Caucasian and Mongolians, as may be proved by an examination not only of the brain, of the hair, of the bodily characteristics . . . but of the instincts, the intelligence. The standard of intelligence of the average adult Negro is similar to that of the eleven-year-old-youth of the species Homo Sapiens.Henry Fairfield Osborn, “The Evolution of Human Races,” Natural History, April 1980, p. 129–reprinted from January/February 1926 issue.

In 1931, The New York Times underscored the all but universal acceptance of this “proof” of Darwin’s theory with an article on one of the most famous paleontologists of his age, Henry Fairfield Osborn (1857-1935), just mentioned, who used the Piltdown “proof” to pontificate that humans had evolved to a higher state than the African ape-men in Europe, and, specifically, in England! From 1934 until 1952, two-thirds of all biology textbooks in the United States hailed “Piltdown Man” as fossil proof of man’s evolution from a one-celled organism through hundreds of millions of years of “struggle for existence.”

In 1953 a careful examination of the Piltdown man skull revealed that it was a complete fraud, which helped to expose the fact that Osborn’s—and Scientific American’s—uncritical enthusiasm for Piltdown Man hinged on the “proof” it provided that homo sapiens had evolved in the homeland of White Europeans, thus confirming the all but universal opinion of European and American natural scientists that White Europeans were more “highly-evolved” than people of African descent!