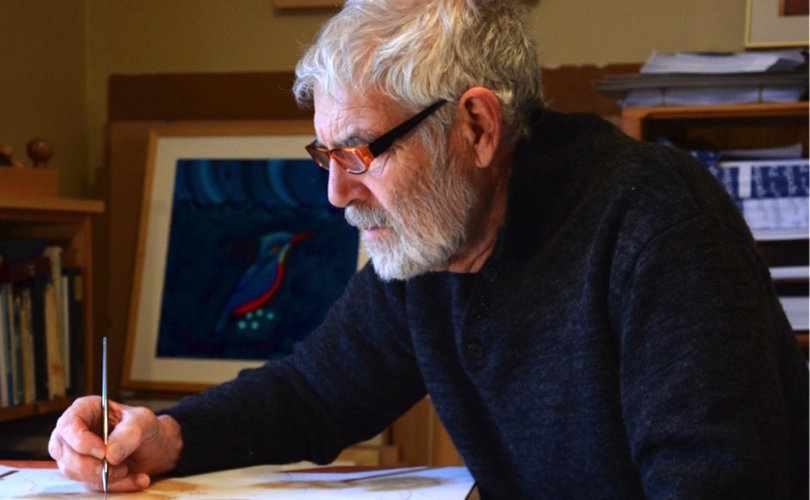 Catholic artist Michael O'Brien at work in his studio.Courtesy of Justin Press

May 31, 2017 (LifeSiteNews) – Upon closing the new biography of Catholic author and painter Michael O’Brien an image arose, planted into the Christian mind by Christ himself:

“Everyone then who hears these words of mine and does them will be like a wise man who built his house on the rock. And the rain fell, and the floods came, and the winds blew and beat on that house, but it did not fall, because it had been founded on the rock” (Mt 7:26).

The life of Michael O’Brien began in 1948 and is not yet completed. It is a story of plenty of rain, floods and winds beating against his house, but behold, the house did not fall, despite the powers of heaven and earth shaking it; despite the dedication to an impossible life project: To be a Christian artist in the time of the great apostasy and to raise a large family.

Michael was brought up a Catholic in a household with many tears and scars. The family had moved to the Northwest Territories, from where Michael, 15 years old, and his older brother were sent to a residential school. Michael was exposed to a sex-abuser headmaster. He survived the traumatic experience by going to Mass daily and there receiving the strength to say no to the worst of the worst. But his refusal to submit had a high price: Total social ostracism. In a way, this experience struck a chord that echoed through decades of his life’s struggle: living at the fringe of society and surviving by drinking from the well of divine grace.

Back in Ontario, Michael began reading Teilhard de Chardin, Sartre and Camus and eventually stopped going to Mass. He sought out new spiritualities and communities, as was the fashion of the day. During a weekend visit in such a community he woke up in the middle of the night and was overwhelmed by the feeling of an intensely powerful and evil presence in the room. Faced with invisible terror Michael cried from the depth of his soul: “God save me!” In that moment he knew that all the Catholic Church had taught him was true and real, and he would never doubt it again. The odyssey of using his talents in service of the Lord began.

His talent was art. His first exhibition of his nature drawings in Ottawa was a great success. But Michael was driven away from urban life in search of a Christian community and simple living close to nature – as many of his generation at the beginning of the 1970s. It brought him to the Rocky Mountains of British Columbia, where a Catholic priest had started a mission project for young people. Michael earned some money as a weather observer – not quite his calling as an artist, but a premonition of his later calling to be a watchman and “interpret the present time” (Lk 12:54-56). There, in Blue River, he met Sheila, having been told that he would marry her before he had even seen her once. The prophecy became true three years later. For Sheila it was soon clear that Michael was her husband, whereas Michael found the clarity to propose after a four-day retreat in 1975. Sheila was the kind of woman God had in mind when he created Eve: “It is not good that the man should be alone; I will make him a helper fit for him” (Gen 2:18). And a helper for Michael she was. She carries with him the extraordinary burden of a life faithful to the double calling of God: To bring art back to Christ and his Church and to be open to life.

Sheila also had experienced a conversion a few years before, and both of them shared the vision of raising a family of “living stones” within the body of Christ.

In a world that was losing its Christian bearings rapidly, it would have been hard enough to survive for a single artist, who had consecrated his life and his art to Christ; but to do this with a growing family in a society that substituted pleasure for meaning, was squaring the circle. It meant moving house countless times, severe poverty, social isolation, exhaustion to the point of burnout and phases of despair. What sustained them was the grace offered by Mother Church through the sacraments: Partaking of the body of Christ in daily Mass, adoration of the Blessed Sacrament, confession and prayer of the Rosary.

What was a Christian artist anyhow? Michael’s first answer was to paint icons. So the O’Briens moved back to Ontario close to Madonna House, a spiritual center, founded by Catherine Doherty, a Russian Catholic émigré. But could a Western young man paint real icons? Catherine Doherty did not think so.

After a renewed resolution only to do sacred art and trust that the Lord would provide for the family, Michael received a rather large church commission on the next day. One would think that the joy of God’s response to prayer would open the wells of creativity, but quite the contrary: Michael suffered through two weeks of complete creative sterility. Later he understood that first there must be absolute emptiness before the Holy Spirit can fill the vacuum.

The family moved back to British Columbia, close to Sheila’s family and close to a monastery of Poor Clare Sisters. The O’Briens were even poorer, collecting food on a wheelbarrow from the monastery, food the sisters had to spare, so they said.

Michael began to write his first novel, A Cry of Stone. His own heart was crying out to the Lord, accusing him of not being a good father, so that he could be a good father for his family, which had grown to four children by 1983. Yet in all these dark valleys always some confirmation came from God: An inner voice, a meaningful synchronicity, a word of God by opening the Bible spoken directly into the heart. Michael also found comrades for his endeavor of reviving Christian art in an Artist Retreat Center at Mount Angel Abbey in Oregon, where he went once a year.

In the 1980s Michael began to give talks about the secularization of the West and the need of Christian art. He publicly criticized Matthew Fox, a Dominican monk, who attempted to merge Catholic Faith with New Age esotericism. More and more he saw a new kind of totalitarianism preparing the way for the Antichrist. Approaching the year 2000, Michael did believe that the Day of the Lord was not far away.

Inspired by John Paul II, who called the world back to a culture of life and proclaimed the teaching of the Church on marriage and family with new depth, brilliance and magnetism, new movements sprung up: The pro-life movement, the family movement and the homeschool movement. The O’Briens engaged in all of them. Once again back to the spiritual outskirts of Madonna House, they joined a couple who had founded the Nazareth Retreat Centre for families. One offshoot was the Nazareth Journal, published in 1990 and edited by Michael.

The sixth child was born. Poverty, embraced by St. Francis as his mistress, weighed heavily on the family. Michael came to a point where he said: “I wish to leave everything connected to writing and painting and editing.” In his despair he fell on his knees in front of the Blessed Sacrament pleading with God. All of a sudden his inner vision opened and the drama of a new novel unfolded before his eyes in all detail. That was the conception of what would become Father Elijah – An Apocalypse.  Every morning he knelt in front of the Blessed Sacrament, asking for an angel of inspiration and a day’s grace for writing. Eight months later, in 1995, the novel was completed.

He sent it to Ignatius Press and soon received a phone call from Fr. Fessio that he would publish Father Elijah. Breakthrough – at last! The novel was eventually translated into 11 languages; trips to Italy, Croatia and France ensued. He received many invitations to talks and declined most of them in order to be able to continue his creative work, which now had become mainly writing novels. Sheila was his first and foremost editor. The medium had changed, but not the missionary intention. For Michael O’Brien, Christian fiction was “to awaken the reader’s imagination in such a way that he is recalled to the basic principles of life in Christ.”

In 1998 they were able to get a mortgage from a bank to buy a house in Combermere. In the long stretch valley there lived a loosely connected community of families who shared the faith, openness to life (to many children), and their commitment to homeschooling.

One of them was John-Henry Westen – the co-founder of LifeSiteNews – with his wife Dianne and their eight children. To the present day, Michael is on the board of LifeSiteNews, which has become the most important and largest internet-platform for life and family in the world.

Children grow up. They needed higher education. What did the O’Briens do? With some friends, they founded a Catholic College and called it Our Lady Seat of Wisdom. It started in 1999 with nine students and three professors. Sixteen years later it has more than a hundred students. Our Lady makes use of it for matchmaking: Fifty marriages have come out of it and many religious vocations.

Thank God, the Day of the Lord has not yet come for Michael. He is still writing and painting and watching the signs of the time, trusting that the gates of hell shall not prevail against the Church (Mt 16:18). He cares for his children and grandchildren, who have been left out of the biography, although, of course, they are more important to a father than any work of art he has created.

The Swedish author, Clemens Cavallin, Associate Professor in History of Religions, must be congratulated. He also is a father of six children and seems to be a kindred spirit. There is a sense of chastity in his writing. Never does he try to step in front of the person he is portraying. Like Michael he also is a painter – a painter of portraits. This colorful portrait of Michael O’Brien in words has the ring of truth. It will encourage any Christian to walk on the narrow path that leads to life.

On The Edge of Infinity. A Biography of Michael D. O’Brien
By Clemens Cavallin
Justin Press, Ottawa 2017. $24.95
Order from the publisher here.

Gabriele Kuby, author of The Global Sexual Revolution – Destruction of Freedom in the Name of Freedom, has translated Father Elijah into German.