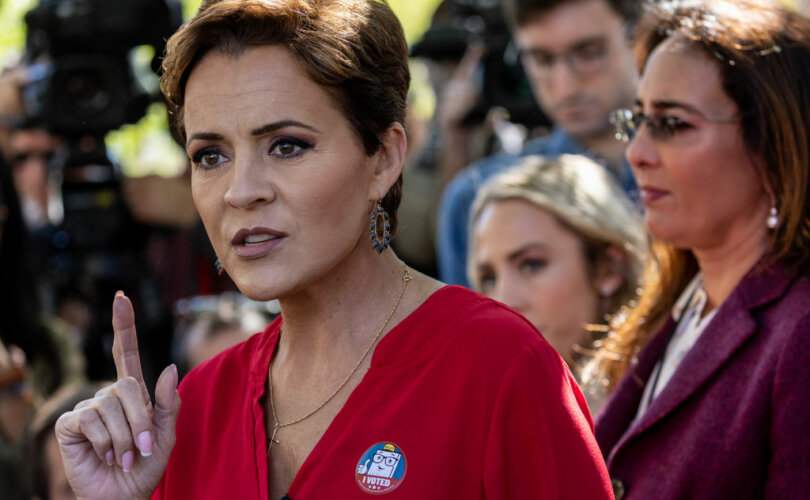 Kari Lake speaks to the media after voting on November 8, 2022, in Phoenix, ArizonaPhoto by John Moore/Getty Images

(American Thinker) — With midterm elections now wrapped up, there are probably a lot of people in Washington and its swamp saying “That’s all over, let’s move on.”

But in Arizona, the top Republican gubernatorial contender has not conceded. She has rightly filed a lawsuit. And her case for a full do-over of Arizona’s travesty election has got to go through if there is to be any justice.

The extended counting, the weirdly broken voting machines, the lost voting time, and the suspected uncounted ballots really does scream of electoral fraud, complete with the person in charge of the counting, just, by coincidence of coincidences, somehow coming up the winner.

Any questions why 80 percent of voters, according to one poll, say there was fraud in this past election?

Arizona’s gubernatorial candidate, the quick-witted and popular Kari Lake, has reason to think so. Her election was basically stolen, yet we aren’t hearing a peep out of the GOP in Washington about it.

Yes, stolen elections happen: GOP Sen. Ron Johnson of Wisconsin once told me several years ago that he had one stolen from him. Yes, candidates sometimes say their elections were stolen when they are unhappy about the results – see Stacey Abrams of Georgia.

But in Arizona the fraud, and signs of fraud, were pretty obvious.

Ballot machines that worked the night before in Maricopa County, Arizona’s biggest, suddenly didn’t work the day of the vote, failing to count votes. Hey, just a technical glitch, right? The number of machines affected, contrary to media reports downplaying the issue, was as high as 60 percent, according to this report. Voters were told to put their uncounted ballots into “Box 3” and just trust that they’d be counted later. Nobody has shown proof or even given a straight answer as to whether or not they were. Ballots ran out and someone “forgot” to put printer ink in the machines – a minimum-wage office skill – making ballots impossible to read.

A judge refused to provide extra time for voting based on the lost time due to election organizer incompetence, and voters were told they could hunt around for another polling place to vote in – hoping that the one they pick didn’t have the same problems. Many voters on tight schedules simply couldn’t do that and ended up not voting. Lake has called this voter suppression and who is to argue with her? By this analysis, the lost time would have provided Lake with the margin of victory, based on the rate of countings.

Based on what’s known, Arizona’s 2022 election is as clear-cut a case for an incompetently run election at best and more likely, something in the neighborhood of Fraud 101, and a strong argument for a full re-do of the election, which the GOP must fight for. It’s not good enough to leave Lake and a few similarly cheated colleagues to do this all by themselves. What was the state of the voter rolls? Why did the machines suddenly not work? Why were there not enough ballots in Republican districts? Aside from these particulars, which Lake is focusing on in her lawsuit, everyone else can see that on a broader level, Lake, who campaigned well, and was ahead in all the polls, somehow got bested by Hobbs, a humorless “Karen” of a woman with a Soviet commissar look who didn’t bother to campaign or debate, yet somehow “won.”

Did it help that Hobbs was the Arizona secretary of state in charge of certifying the result?

As Stalin used to reportedly say: It’s not who votes that counts, it’s who counts the votes.

While we are onto that kind of talk, Hobbs’s past is worth looking at, too. Funded by George Soros and family, she first won office as part of Soros’ “Secretaries of States Project” a few years ago. See here and here. A look at how she won that audience, according to Wikipedia, which is on a locked account reads as follows:

On March 8, 2017, Hobbs announced her candidacy for Arizona secretary of state. In the 2018 election, she faced Republican nominee Steve Gaynor. On November 6, 2018, the Associated Press prematurely called the race for Gaynor. With the race as close as it was, neither Hobbs nor Gaynor initially claimed victory. In the days to come, Gaynor’s lead narrowed as more and more ballots were counted. On November 16, Hobbs was officially declared the winner by a margin of 20,000 votes. She was the first Democrat to hold the post since Jane Dee Hull in 1995.

Now we suddenly see much of the same thing, done again, with Hobbs coming out on top again, always by a shift in voting direction at the last minute, and a win but only by the narrowest of margins.

There’s a wall of long-time Arizona GOP officials who could easily be NeverTrumps, such as one Bill Gates (not the famous rich guy), Maricopa County Board of Supervisors chair, who have claimed without evidence that all was free and fair, sounding like Jimmy Carter in the wake of one of Hugo Chavez’s electoral fraud contests in Venezuela. Nobody can believe them. Now some of these officials say they are “in hiding” due to all the threats.

Well, who knows? In Brazil, where the election is widely seen as fraudulent, they’ve got tires burning in the streets and mass street protests and roadblocks still going on.

The GOP needs to recognize that it’s the party’s ox being gored here and GOP leaders – the big ones, in Washington and beyond – need to speak out and send Kari Lake all the financial support she needs to challenge this dog of an election.

This election was very obviously so flawed that its result cannot be determined. Lake has shown preternatural confidence and a fighting spirit in challenging this travesty so that at least GOP candidates in the future can win elections. The GOP leadership should be right with her, or they can’t be surprised if they continue to lose elections. Lake deserves all the help she can get.