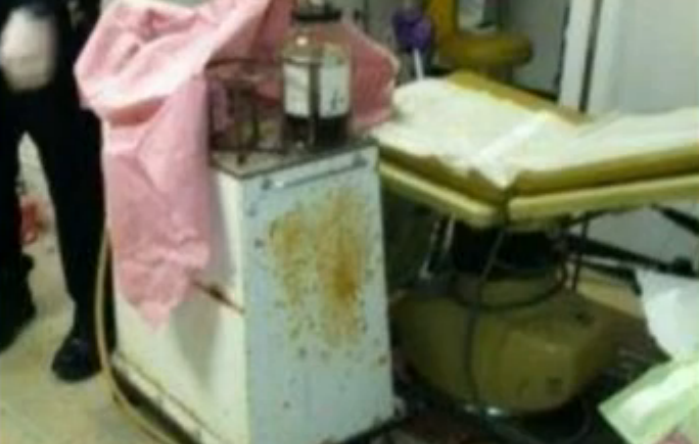 A photo of the interior of Women’s Medical Services abortion facility in Muskegon, Michigan that was closed by Fire Marshals on December 26, 2012.Operation Rescue

Jan. 25, 2016 (LiveActionNews) — There have been a lot of questions about how Kermit Gosnell was able to carry on for as long as he did, killing babies, butchering women, and practicing in such filthy, disgusting conditions. Women were forced into abortions and given STDs at his facility, had their fertility taken from them, and two lost their lives. Countless babies were cruelly murdered, after labor was induced and they had already been born. Gosnell kept their severed feet in jars in his facilities; he kept the intact bodies of even more of his victims in his freezer.

The makers of 3801 Lancaster revealed a decades-long cover-up, dating back as far as 1989. Despite receiving multiple complaints and notification that Gosnell had killed two patients, nothing was done.

Two years ago I wrote about this, and we are still left with the same unanswered questions:

In 1996, the Department of Health was notified that a patient had suffered a perforated uterus at the hands of Dr. Gosnell and had to undergo an emergency hysterectomy. They took no action. A pediatrician notified the Department of Health that patients of his who had seen Dr. Gosnell were returning with a sexually transmitted disease. They took no action.

In 2001, a former employee informed the Pennsylvania Department of State that the conditions at Gosnell’s facility were abysmal – including the fact that he permitted flea-infected cats to roam the facility – and that he was allowing unlicensed workers to give anesthesia to patients. They took no action.

In 2002, the Department of State was notified that Semika Shaw, a 22-year-old woman, had died of sepsis and a perforated uterus in 2000. They took no action.

In 2003, the Philadelphia Health Department received a tip that aborted babies were being stored in paper bags at Gosnell’s facility. They took no action.

In 2005, an attorney filed a complaint with the Department of State on behalf of his client, who had suffered seizures after Gosnell administered anesthesia which was contraindicated for people on methadone, which she was. She had informed him of this prior to the administration and asked him to stop as she began to seize. The Department of State took no action.

In 2007, the Department of Health received a report of a stillborn, 30-week-old baby girl. The baby was induced in the course of an abortion. Abortions at 30 weeks are illegal. They took no action.

In 2008, and then again in 2009, an employee with the Philadelphia Department of Public Health visited the facility and informed them of the disgusting conditions there. They took no action.

In 2009, Gosnell notified the Department of Health that Karnamaya Mongar had died at his facility. There were requests to open an investigation. They took no action.

It wasn’t until 2010, when the FBI raided his facility, that action was taken. They found bloody floors, dirty recliners covered with bloodstained blankets, and a cat freely roaming the halls. Cat feces was found on the floors. We now know the rest of the story. The abortion industry washed their hands of any responsibility for Gosnell’s depravity. But they played their part — the National Abortion Federation inspected Gosnell’s facility, took note of the many violations, and declared it the worst clinic they had ever seen. Despite that, they took no action and didn’t report Gosnell to any authorities. He also worked at a NAF facility in Delaware, and various NAF facilities referred their patients to Gosnell’s Philadelphia facility.

The 3801 Lancaster filmmakers released another, longer, documentary film called 3801 Lancaster: American Tragedy. After Gosnell’s case gained national attention, the abortion lobby fell all over itself trying to reassure Americans that Kermit Gosnell was an outlier. The average abortionist is totally trustworthy and these kinds of things never happen, they said. Sadly, that’s not the case — and the filmmakers of 3801 Lancaster: American Tragedy spotlighted the following instance proving otherwise.

Joyce Vasikonis, a former nurse at Planned Parenthood of Delaware who says she is absolutely not pro-life, was interviewed for the film about her time working for Planned Parenthood. “I knew something wasn’t right there the day I walked in,” she said. “The mode is, just do it. Just do it. Whatever somebody says to do, just do it. You know, don’t ask questions, don’t say it’s not right, you know, don’t rock the boat.” According to Vasikonis, there was only one motivation at Planned Parenthood: money. “There was one administrator that came to me at the end of every abortion day. And it wasn’t, ‘How did the day go? Anything we need to talk about?’ – nothing like that,” she recalled. “It was, ‘How much money did we make?’ The expectation that, as if I was a salesperson and bringing people in, we were to make $10,000 a day.”

Another former nurse with Planned Parenthood of Delaware, Jayne Mitchell-Werbrich, who likewise said that she is not pro-life, echoed Vasikonis’ statements in the film. “I went in, and it was a shock. It was an absolute nightmare. It was nothing like I was used to. I worked at a hospital, so I’m used to clean, I’m used to medical equipment that’s functional, I’m used to a whole different world,” she said. “There would be blood on the table, and blood, and he – he had no qualms, he was like, let’s go, let’s go!” He was Dr. Timothy Liveright, an abortionist who has had multiple complaints filed against him. At this facility, patients were exposed to bloody tables and unsterilized instruments. The facility didn’t have enough instruments to last the entire day, and Liveright was in such a hurry to do more abortions that he wouldn’t complete the sterilization cycle — instead of letting equipment dry, he would put them into the same freezer that the staff used for their food. He refused to let staff clean the rooms after performing an abortion, and would instead immediately bring another patient back. And staff didn’t keep quiet about these issues.

“I reported all of these to the Division of Public Health and the Department of Health and Social Services,” Mitchell-Werbrich said. “For months, after numerous reports, both agencies refused to inspect Planned Parenthood.”

She wasn’t the only one who tried to get authorities involved. Vasikonis echoed Mitchell-Werbrich’s story, saying, “They only accepted reports from patients and immediate family members. They didn’t listen to employees. I was like, ‘How can that be? Who would know more about what’s going on than the person that’s actually working there?’ But they didn’t have to listen to employees.” When inspections finally were completed, the only action taken was to lecture employees about washing their hands.

Worse, former business manager for the facility, Melody Meanor, also explained how Liveright’s disorganization put women at risk. “A patient would come and request STD tests, or have symptoms. Some of the patients either had gonorrhea, chlamydia, or both, and they were not notified in the proper time frame,” she said. “It was so disorganized that 200 women were never told about their STD results.”

The facility was finally shut down in 2013, after being cited for more than a dozen “unsafe and unsanitary” practices by the Division of Public Health. Dr. Liveright was fined $1,500 and received only a letter of reprimand; however, he surrendered his license to practice medicine in the state of Delaware.

After the Gosnell fiasco and the attention on the refusal of Pennsylvania authorities to take any action against him, laws were passed requiring abortion facilities to be inspected like any other ambulatory surgical center. Texas and Virginia soon followed suit in 2013. But it didn’t take long for those laws to come under attack; in 2014, the Virginia State Board of Health overturned the new legislation and had the regulations removed. Planned Parenthood and other abortion facilities are suing Texas in an attempt to prevent the legislation from being enacted. The sad fact is that disgusting abortion facilities are all too common, which is exactly why laws like these are needed:

Gosnell was not the only one. Unsafe practices are endemic to the abortion industry, and this is why increased regulations are needed. Abortion facilities need to be inspected, and they need to be held to the same standards that other medical centers are held to. There is no reason for abortion centers to be exempt from them, and it’s an issue that goes far beyond politics — women’s lives are at stake if we don’t act.