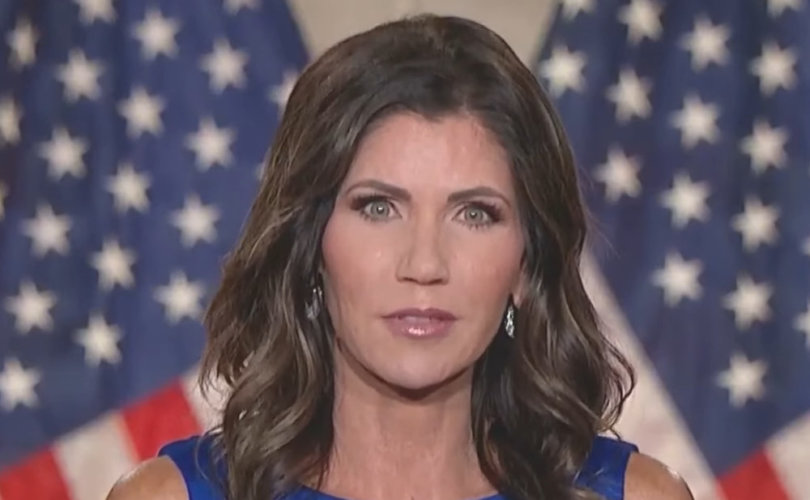 April 1, 2021 (FamilyResearchCouncil) – It’s been a long 10 days for the people of South Dakota, who just watched everything that their legislature worked for vanish with one wave of the governor’s hand. “It’s maddening. It’s frustrating,” one statehouse member said about watching Kristi Noem (R) destroy their months of progress on girls’ sports. Despite a week and a half of outcry from her constituents, Noem dug in and did not, as some people hoped, reconsider.

Reporters on both sides were taken aback by the governor’s decision, warning that her failure to “read the political room” could have consequences for years to come.

Even the Washington Post couldn't help but be surprised that Noem would turn her back on such a core constituency – especially on an issue that enjoys near-consensus support. She made herself a “national icon” for bucking the COVID norms, the Post's Henry Olsen writes.

But this “backtracking” on a bill that was an easy lift for a state like South Dakota may have just “torpedoed her standing” with the party's core. “Noem's meteoric national rise has spawned much doubt about whether she has the chops to navigate the difficult issues… How she recovers from this unnecessary self-inflicted wound will determine if the doubters are right.”

In Pierre, where the betrayal hits hardest, leaders like House Speaker Spencer Gosch (R) could only shake his head at how carefully the governor tried to spin her decision. “Her letter back to the House said, ‘I have not vetoed the bill,’ but her actions said otherwise.”

Regardless of the smoke and mirrors, the legislature set to work, desperately trying to find the votes for a veto override. “We strongly debated the bill,” state Rep. Rhonda Milstead (R) explained shortly afterward on “Washington Watch.”

“We had good testimony on the bill, but we fell two votes short,” she said soberly. “We had 52 votes in February. Now we have 45… And the unfortunate thing is: there's nothing about that bill that's [changed].”

What's changed, she said, is that Republicans “were lobbied very hard by the governor to oppose the bill. And that's the disappointing part. You know, when you keep hearing this message [from her] that, ‘I’m all for fairness in sports,’ why would you fight it?”

To actual South Dakotans, Rhonda said, the people on the street, it's incredible to them that we even have to debate this issue. But it's probably even more stunning that they've had to fight their own Republican leader to do it! Over the past week, Rhonda pointed out, it was Noem who opposed their effort the loudest. “Some legislators were getting three and four calls [from her] not to go along with this.”

Instead of listening to the dozens of organizations who supported it and could defend it, the governor apparently listened to those groups, like the Chamber, who didn’t. When push came to shove, it was their threats the governor caved to. “We let these people dictate to us what our values should be,” she argued. And that's wrong. “South Dakota is a state that has integrity. People are moving here because of our integrity, and I think we've let them down.”

In Arkansas, where state leaders just saw their girls’ sports bill become law, they watched Noem botch South Dakota's legislation with displeasure. “I think it was a bad decision,” State Sen. Missy Irvin (R-Ark.) said. She should have “worked [alongside] our legislature,” Missy argued, and supported the effort.

“There’s huge, broad support for this legislation… And the people of Arkansas are willing to go to battle for their voices and for what they stand for. And that's what we should be doing in America. We cannot roll over and just let people threaten us to be silent – threaten us to not stand up for what we believe, and threaten us to not take a stand for something that we all know is the right, common-sense policy…”

In the meantime, Noem will try to hide behind her pair of executive orders on girls' sports – which, like her Title IX coalition, seem to be more about appearances than substance. She offered them after the veto in hopes of tamping down another round of criticism – but the orders, like her substitute for HB 1217 are JV material and fall far short of the protections women need.

They don’t have a cause of actions for students to sue, don’t have a provision barring action against the schools, and only require an affidavit from schools – not a yearly certification. She says it's her attempt at “protecting fairness” until another bill is introduced.

As for the determined South Dakota legislature, it was a valiant effort that deserved better. “I think we'll have to wait until next year to introduce something again,” Rhonda said. “But we'll start working on it and hope that our governor will not be an absent executive and participate in the process with us – instead of waiting until the last week [to stop it].”