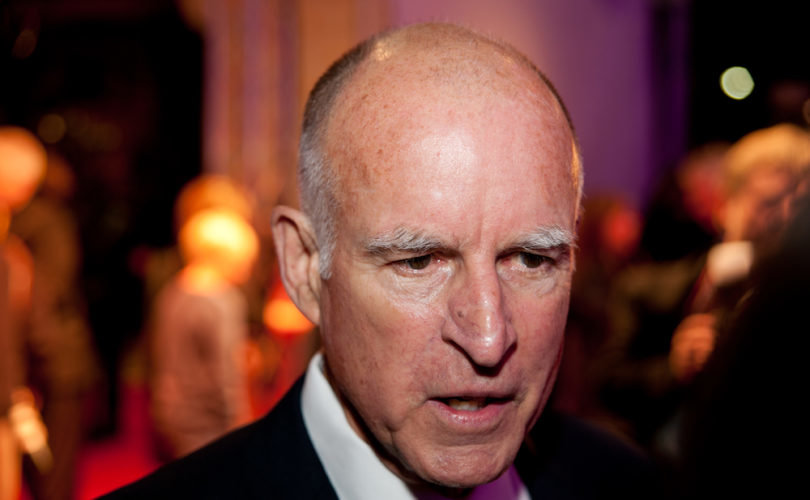 On September 11, California legislators passed Assembly Bill X2-15, the “End of Life Option Act,” which legalizes physician-assisted suicide. If the bill is not vetoed by California Governor Jerry Brown within 31 days of its passage, the bill will become state law. Here is an open letter written to Gov. Brown by CLI Associate Scholar Dr. Jacqueline Harvey, Ph.D. urging him to veto the bill. To download as PDF, please see “An Open Letter to California Governor Jerry Brown on Assisted Suicide.”

September 17, 2015 (LozierInstitute) — I am a political scientist who often presents a wealth of scientific evidence from the academy on the dangers of assisted suicide. But today I write to share an even larger concern: the dangers not just with ABX2-15, but that would also ensue if you affirm the grossly inappropriate tactics employed to pass this hasty legislation without the vetting that killed virtually identical legislation just months ago. You are assuredly inundated with overwhelming evidence that provides ample justification to veto ABX2-15, vital data that was denied lawmakers, but there is more at stake than bad policy. What is also at stake is the integrity of a legislative process that protects citizens. This process was subverted by exploiting the special session to fast-track ABX2-15 without necessary debate, since keeping lawmakers ignorant was perhaps the way to get the bill to your desk. In this letter, I will lay out the catastrophic consequences if you reward this contempt for civics by signing ABX2-15.

The evidence is irrefutable on the intrinsic dangers of ABX2-15 so you have more than enough justification to veto this legislation. To be educated on assisted suicide is almost always to reject it, so I trust that where lawmakers did not thoroughly research the issue, you assuredly will. Academic research is critical as unsubstantiated talking points are purposefully manipulative. When the suicide lobby cites four states that have assisted suicide, that is true – but it is intentionally deceptive, as they fail to mention that in only one of the four states did a bill survive expert testimony. Banking on ignorance and quashing evidence (or simply bypassing the legislature altogether with judicial activism) was the strategy they resorted to in three of their four victories. This is the strategy that you cannot ratify by signing ABX2-15.

California voters themselves saw through one attempt to prevent testimony when they rejected a ballot initiative intended to exploit their lack of knowledge on how dangerous legal suicide is. The suicide lobby can subvert committees and debate in this way and accrue an $11 million annual war chest to buy advertisements laden with emotional appeals and carefully-crafted manipulative language (which polls show can change voter response on assisted suicide by up to 20 points simply due to word choice). California did not buy it – and was the second state to vote down assisted suicide in 1992 with a margin of 54% to 46%. In fact, nearly two-thirds of ballot initiatives still fail and if lobbyists were confident in public support, they would try this again. Obviously, they are not. Nor should you be.

Since the voters rejected assisted suicide and the Assembly followed suit, rejecting seven bills since 1995, there have been scores of other attempts that ethical public officials have rightly refused. California judges have rebuked the suicide lobby’s attempt to usurp the role of the legislature for years, recently rebuking two attempts to impose assisted suicide by judicial activism. Convincing judges to legislate from the bench worked in Montana in 2009 and was briefly successful but repealed in New Mexico. It did not work in California when judges were resolute that assisted suicide’s legality be addressed and debated in its proper venue: the Assembly. Judges upheld this respect for the lawmaking process only to have the suicide lobby impugn it with ABX2-15. To sign the bill would validate their contempt for civics and invite a host of other issues.

This is because ABX2-15 did not adhere to the legitimate legislative process, but was merely SB 128 resurrected to go over the heads of lawmakers who had rejected it months earlier. Their reservations remain, as should your own – because again, there is a reason why the suicide lobby thumbed their nose at you, hijacked the special session and subverted the process. The evidence on the dangers of assisted suicide has killed over 175 bills in 35 states since the early 90’s. Assisted suicide bills fail 99.95% of the time when treated like every other piece of legislation and subjected to expert testimony, debate and possible amendment. California has multiple failed bills starting with two in 1995, 1998, 2006, 2008 and SB 128 in 2015. When legislators hear about the dangers of assisted suicide in hearings, they reject it virtually every time. California Assembly members did just that, and just three months ago with SB 128.  This time with ABX2-15, they were purposefully kept in the dark. You can read the evidence yourself but even if you do not wish to do the Assembly’s job you should rightly reject any legislation where lawmakers were derelict, adopting a bill that could only be passed by suppressing scientific testimony.

Only one state has passed assisted suicide through legitimate means when Vermont became the first and only state to pass an assisted suicide bill, Act 39 in 2013. And this is a cautionary tale.  The representative who managed an unheard-of historical victory was promptly rewarded with unemployment, voted out and replaced by an anti-assisted-suicide legislator. Of those who voted in favor, nine were unseated and eight replaced with lawmakers who voted to repeal. Even states like Montana that did not legalize assisted suicide by choice but de facto by court decision joined these states with a host of ensuing drama through relentless repeal efforts. This is what you will ensure for California, not merely the death and destruction that legal assisted suicide will wreak, but a bogged- down Assembly condemned to deal with the issue for years to come.

Consider that ABX2-15 was only passed by hijacking sessions you convened to focus on finding budgetary solutions in health care and transportation and after you expressed your disapproval – and rightly so. This issue has already inhibited the work of the Assembly as special sessions do not exist to reintroduce dead bills unrelated to the session’s express purpose, especially ones so controversial they are particularly counterproductive to the Assembly’s goals. And the healthcare finance topic in particular places you in a position of suggesting suicide is a cost-containment measure in healthcare, like in Oregon where requests for real treatment will not be paid for, but suicide is completely covered. To affirm this behavior by signing the bill would foremost result in bad policy but would also invite more disdain for decorum.

The lack of regard for law and the will of the people, and the intentional attempts to thwart education and deceive cannot be allowed to prevail. They have put you in the position of standing your ground or signing a death warrant for the terminally ill to be killed with the same drugs used to execute California inmates on death row. Your convictions against capital punishment oppose the use of these poisons to kill convicted murderers and now your convictions require you to oppose the execution of law-abiding citizens at their most vulnerable point, who are just as human and worthy of compassion. And assuredly, if you throw away your legacy of true compassion to the dying like you showed alongside Mother Teresa and instead sign assisted suicide into law, you affirm tactics that will put other governors of like values in the same sorrowful spot where you now sit.

I appeal to you as a long-standing trustee of the public good and defender of the legitimate legislative process to stand by your condemnation of this gross misuse of the special session. I implore you to read the evidence that was withheld and reject ABX2-15 for its substance, but also for the unethical tactics employed to pass it. As we end suicide prevention week, let your legacy be talking the suicidal down from the ledge – not giving them a push.