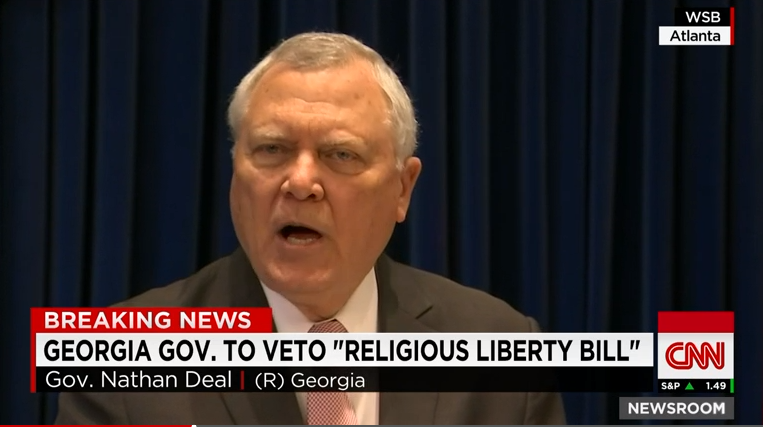 March 30, 2016 (BreakPoint) — I remember when I first heard Chuck Colson, on a BreakPoint commentary years ago, make a distinction between religious liberty and freedom of worship. “Freedom of worship,” a phrase being used more and more Chuck warned, is the freedom to believe what you want in the privacy of your own mind, and maybe inside the doors of your house of worship. But what the founders had in mind was much more robust—the freedom to carry our deeply held beliefs into the public square and allow them to shape our lives.

As I admitted to him later, I thought Chuck was making much ado about nothing with that distinction. But as we’ve clearly seen in how the government has argued for the HHS Mandate and the way the courts have ruled against wedding-related business owners, Chuck was absolutely right.

This week’s incident, however, threatens even that neutered, watered-down version of freedom of worship.

As we talked about yesterday on BreakPoint, Georgia Governor Nathan Deal vetoed HB757, saying the bill “doesn’t reflect the character of our state or the character of our people.” Deal, despite his insistence otherwise, was the latest governor to cave to the well-orchestrated pressure from the NFL, Disney, Salesforce, and the LGBT lobby.

That would be disturbing enough if this were the same type of religious freedom bill that caused so much trouble in Arizona and Indiana. But as Ryan Anderson notes at the Daily Signal, this bill offered no protections for florists, photographers, bakers or other wedding-related professionals to live by their religious convictions. This bill would have only protected the freedoms of ministers from officiating same-sex ceremonies, for faith-based organization from hiring employees whose views undermined their mission, and for protecting churches and their ministries from state government-level discrimination.

In other words, this bill would have only protected something like the “freedom of worship” Chuck worried our religious freedoms would be reduced to. And, Republican Governor Nathan Deal vetoed it, basically allowing even this soft, spongy version of conscience rights to be labeled hate and intolerance.

Even more, according to Anderson, Governor Deal actually argued states did not need religious freedom protection, other than the “broad protections of the First Amendment.” Wow. Anderson called that view “nonsensical.” I would use much, much harsher words than that.

Still, all who care for religious freedom must learn from this incident. The Indiana Religious Freedom Act firestorm a year ago showed us that “religious freedom,” an idea as American as baseball and apple pie, was no longer considered to be a cultural “good.” When many, many people in our country hear “religious freedom,” what they really hear is “license to discriminate.”

The Georgia governor’s words and actions this week prove just how far that redefining of religious freedom has gone. Apparently, not even pastors should be able to hold religious convictions that violate the new orthodoxies our culture has embraced.

Folks, this is a “culture-moment check.” We may not like where we are as a society, but it’s where we are as a society. We haven’t often had to choose between God and Caesar in our lives, but we’d better decide now where we stand. And any parent or pastor or community leader or teacher or conservative media spokesperson, who cares about religious freedom, must learn to make the case for what it is and why it matters, before yelling and screaming that we should protect it.

We may be using the same vocabulary as our culture, but we’re not using the same dictionary. So all of us, as Chuck would say “over the backyard fence and around the barbecue grill,” have our work cut out for us.

And finally, we must remind each other again and again, that times may be tough but hope is not lost. In Christ, and Christ alone, we find true freedom.