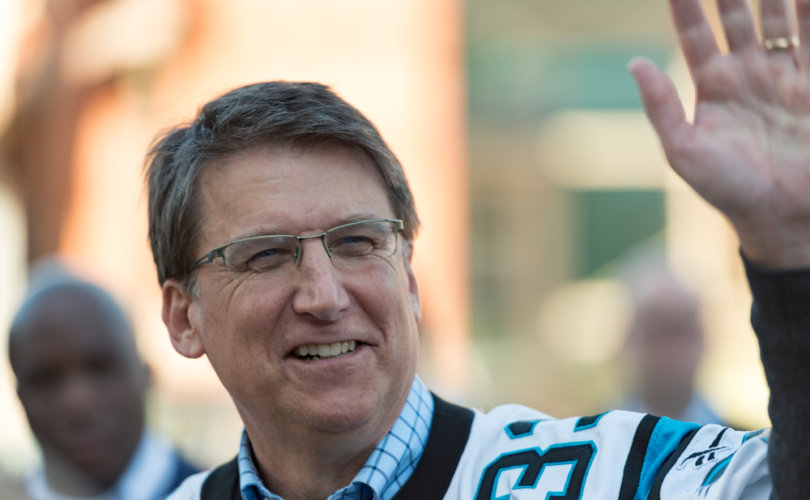 March 31, 2016 (FRC) — Whatever happened to that “wall of separation” between church and state the Left was championing for the last 60 years? Using government as the battering ram, the Left has breached the wall and are preparing to storm America's churches. And amazingly, they've been aided by Republican governors who've become nothing more than puppets for Big Business in the process.

Exhibit A is Georgia Governor Nathan Deal (R), who has proven he's more interested in the money of Apple, Intel, and Disney than the morals of Georgians. Earlier this week, Deal vetoed H.B. 757, which would have provided the barest of religious liberty protections to churches and a sliver of faith-based organizations that believe in natural marriage. In fact, the language was so weak after House leaders watered it down that FRC had a difficult time supporting it. After all, even President Obama says he believes in freedom inside the four walls of the church. Apparently, a governor who was elected with the help of evangelicals can't even support that and vetoed the measure — inviting the government to launch attacks on every congregation in the state.

“This is a prime example of why Republicans across the nation are concerned and upset,” said local Pastor Don Hattaway. “We vote for politicians according to what they say, and then they when they get in office, they do the contrary… We simply want to act out our faith. We don't want to harm anyone. We minister to people and we feed the hungry, and we don't ask what lifestyle people are living. But we also don't want people telling us to embrace a lifestyle that is clearly immoral and denounced in Scripture.” Unlike his northern neighbor, Governor Pat McCrory (R-N.C.), Deal caved to Big Business and Hollywood and put their agendas ahead of voters'. That may be easier in the short-term, but ask Indiana Governor Mike Pence (R) where the road to political compromise leads. In attempting to placate the Left, these leaders are alienated from their base — and ultimately scorned by the CEOs and sports leagues they were so anxious to impress.

Of course, the other big loser in all of this is Big Business. After stunts like Indiana's, Arkansas' and Georgia's, the mask is finally slipping on the not-so-free market. Once voters see that business is abandoning their values, they'll abandon business. And here's the irony: corporate America is only bullying states like Georgia because they themselves have been bullied by LGBT activists! Now that they've been commandeered by the politically correct crowd, their real foundation — a longtime alliance with social and fiscal conservatives — is starting to crumble.

Meanwhile, in North Carolina, the governor is still fighting the last gasps of the liberal misinformation campaign before it moves to its next target. Although 334 businesses signed on to a letter thanking Governor McCrory and the General Assembly for protecting their freedom and their safety, some in the media are resorting to outright lies about what the controversy was even about. “To much of corporate America,” the Los Angeles Times claimed, “the bill amounted to legalized discrimination against gay people by allowing them to be denied certain services and protections.”

Well, they're right about one thing: the debate was about legalized discrimination — against Christians, who, like most rational Americans, don't think the government should be able to dictate what they believe. Absolutely nothing in North Carolina's bill would have given businesses the right to deny services to anyone. What it did deny was the access of grown men to the showers and restrooms of young girls — an idea that 70 percent of the state thought was “unreasonable and unsafe” (another 8 percent were unsure). As usual, the media only sees what it wants to see. And religious liberty as a winning issue doesn't fit their narrative.

“North Carolina is consistently one of the top five states in the nation for business and economic growth,” the KeepNCSafe Coalition pointed out. “Any businesses threatening to not do business in our great state based on dishonest attacks by opponents of women's and girls' privacy and safety are only hurting themselves… It would be a shame for any companies to miss out on that simply because they believe men should be allowed into locked rooms with men and women.” To San Francisco, New York, Washington State, the NBA, and anyone else hoping to punish the state for upholding the First Amendment, locals have a message: you'll only be hurting yourself.