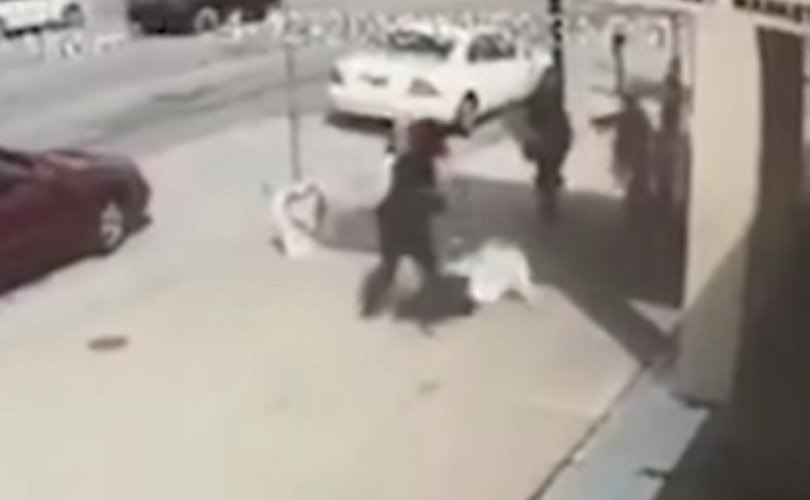 June 27, 2019 (Live Action News) — According to WHAS, a Kentucky grand jury has decided not to indict a Louisville pro-abortion woman who assaulted an 82-year-old pro-life activist.

Thirty-two-year-old Janaya Alyce Gregory was caught on camera pushing Donna Durning outside of the state's only abortion clinic, EMW Women's Surgical Center, back in April. Durning was hospitalized with a broken femur and a cut to her head. She needed surgery and physical rehabilitation for the injuries.

According to Durning, she was offering Gregory a card for the local crisis pregnancy center when Gregory “charged” at her and pushed her to the ground. Despite the attack being caught on camera, the grand jury declined to indict Gregory, who was facing a second-degree assault charge.

In a bizarre Facebook post, Black Lives Matter Louisville celebrated the jury's decision and promoted a fund to help pay for Gregory's legal expenses. The website for the fund accuses Durning of staging the fall. Black Lives Matter Louisville attempts to justify the violence against a pro-life elderly woman, saying, “Women like Donna Durning think that it's adequate to perform violence outside of abortion clinics. They believe that folks seeking services for their reproductive health are disposable and warranted the violence that they perform because of their, protesters, religious views in the name of Christianity.” In addition, they called the presence of pro-lifers outside the abortion facility “state sanctioned violence; domestic terrorism.”

But Durning was not acting violently, and pro-life activists do not believe that anyone who obtains an abortion is “disposable.” Quite the contrary. It is the abortion industry that carries out violence every single day through dismemberment and heart attack abortions on innocent preborn children. In addition, abortion directly targets Black lives, especially in New York City where more Black children are killed through abortion than are born.

Gregory's attorney said she is “relieved to have this situation behind her and is looking forward to focusing on her family.”

Attacks against pro-lifers are increasing in number. One pro-abortion man recently received probation for roundhouse-kicking a pro-life woman in 2018. But, based on Gregory's case, it seems that the law is not always willing to protect pro-lifers who are assaulted. The rise in assaults against pro-lifers also highlights the reality that abortion is not a simple procedure, but one that causes emotions to run high.