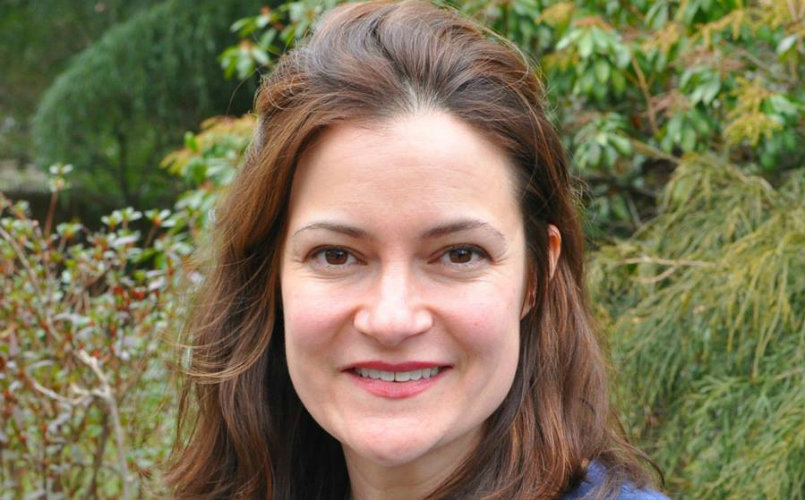 "As the months and years have become decades since my abortion, I have been acutely aware of how old my child would have been each year." (Pictured: the author)

Nov. 1, 2016 (LifeSiteNews) – A funny thing happened when I held my friend’s 3-month-old son a few days ago. No, I didn’t wish I could have another child. I didn’t lament the fact that my youngest “baby” is in third grade, nor did I mourn that I will not be giving birth again. But last night, for the first time, I felt a sharp pang of longing for grandchildren. I quickly brushed it aside, after all I’m only 45! My oldest just started high school a month ago, for goodness’ sake. God willing, there is plenty of time for grandmothering in my future.

An even funnier thing happened just a day later when a dear friend visited me for coffee talk. Within minutes of her arrival she pulled out her cell phone and shared countless photos of her three newest grandbabies—none of them even crawling yet.

I robbed my child of a lifetime of experiences that may have included parenthood—and grandparenthood (both mine and his). Abortion tears holes in the fabric of generations, and yet this is rarely (if ever) acknowledged by abortion proponents.

Then yesterday at hospitality and fellowship hour at church, I held my friend’s newborn son. Gosh, is he a doll. So much hair! She let my eight-year-old hold this precious baby. I gently handed her tiny boy back to her. We returned home to the news that my friend’s son and daughter-in-law are expecting. My friend joyfully awaiting the birth of his first grandchild is my age. I read the happy announcement again, and tasted a new flavor of regret over my abortion when I was a teenager.

As the months and years have become decades since my abortion, I have been acutely aware of how old my child would have been each year—he would have turned 27 in July. I’ve wondered what color hair he might have had, or if he’d have played an instrument or a sport. What would his laugh had sounded like? Would he have joined the military after high school or gone to college or to work? Would he be married by now? Would he—there it is…Would he be a father by now? Would I be a grandmother by now? I tried on this new cloak of sadness. It fit differently than my decades-old remorse, but it definitely fit.

I’ve heard innumerable women share their stories of regret and conversion after their abortions. Many friends have talked about what they imagine their children might have been like had they been born and not aborted. But I’d always imagined these missing people as young children, like the heartbreaking statue created by Martin Hudáčeka, “Memorial for Unborn Children” that depicts a transparent little girl with her hand touching the head of a solidly-sculpted woman who appears to be weeping into her hands. A little phantom child consoling a mournful mother. This is what I see when I think of those aborted babies. I guess I never followed that train of thought to its logical conclusion. My missing baby is now a missing adult, and I find myself gripped by thoughts of missing grandchildren.

I robbed my child of a lifetime of experiences that may have included parenthood—and grandparenthood (both mine and his). Abortion tears holes in the fabric of generations, and yet this is rarely (if ever) acknowledged by abortion proponents. This aching absence in my heart and in my family tree isn’t included in the flawed research touted by abortion advocates that most women feel “relief” after aborting a child. If you ask her a few weeks later this may be true for many, but what about a year later? Three years later? Three decades later? “I’m so relieved it’s over,” one might say after the funeral for a beloved family member. Feeling relief the ordeal is over doesn’t mean you are glad the person is dead, just that the painful event can now be put in the past. As it is with abortion for many, many people.

Home alone with my sadness, I pray for our culture to remember and rekindle the sense of awe and gratitude at the miracle of life. I pray for our culture to welcome children as gifts and not as burdens. And I pray for healing for those grieving the missing members of their family tree. I pray for those facing unexpected news of pregnancy. I pray for frightened mothers to be comforted by the compassionate outreach and support of family, friends, and pro-life advocates—you will miss this child of yours! Maybe not right away, but someday, and for the rest of your life.