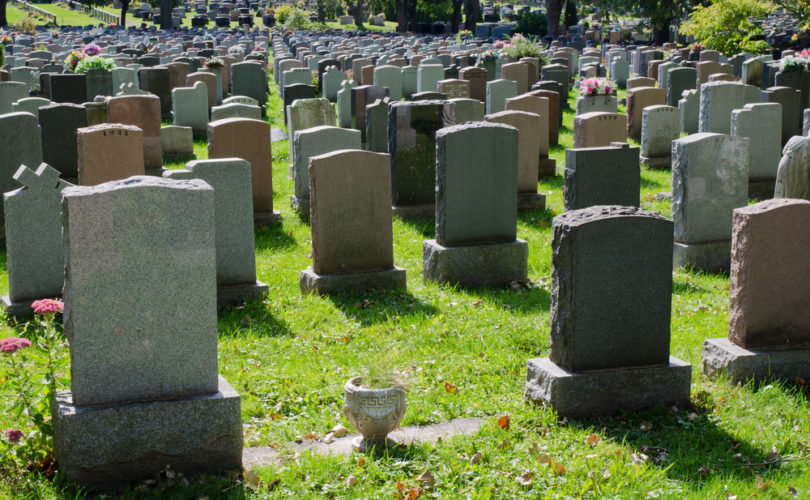 Earlier this week I attended the funeral of one of the founding members of the small Romanian Rite Catholic parish my family and I belong to in Aurora, Illinois, a man named George Todos.

Among his many services to St. George Catholic Church, George had kept alive many of the hymns and prayers of the Romanian immigrants who had founded the parish—including the melodies of the very funeral service held for him this week. He had never married; the parish became his family.

Old George retired from cantoring about a year after my family joined the parish, by which time I had become a cantor myself. A holy and gracious man, George never ceased to express his appreciation that a younger man was carrying on the musical traditions that mattered so much to him. I was honored to celebrate his memory and pray for his eternal repose with my fellow parishioners.

The Tragedy of an Infant’s Death

After the burial service at the corner of a cemetery devoted to the departed of St. George, I (almost literally) stumbled upon the small gravestone of a child. In fact, it marked the grave of a newborn girl, Carol Jean, who had lived only a week: from December 28, 1947 to January 3, 1948.

Even after so many years, it was a sad reminder of what must have been a horrible tragedy for Carol Jean’s family, losing a child only a week after birth. Was she born sick? Did she catch a horrible disease in her first few days? Was there some kind of accident?

I don’t know—but what I do know is that this child was loved by her mother and father. That little gravestone proved it.

I couldn’t help but think about the gravestones placed at 44 different cemeteries across the United States over the burial plots of children who were not loved by their parents: children who were aborted during their first weeks of life.

There are no birth dates on those gravestones. Those children were never allowed to be born. Nor are there death dates. Their deaths were not mourned—not until compassionate pro-lifers offered them the only loving act they would ever receive: to bury them in sacred ground.

So these gravestones list only the year that these children were buried.

It’s a sobering thought. Never born, abandoned by their very parents, and by the whole society that allowed them to be legally killed. Only in being rescued from dumpsters and laboratory loading docks, and then solemnly buried, were these children even acknowledged as belonging to our human family.

What a stark contrast to the grave of little Carol Jean. She lived only seven days, but she was welcomed into the community. She was given a name. When she died, she was mourned.

We don’t know the names of the abortion victims buried in those cemeteries across the country. In some cases, we don’t even know if they were boys or girls, so mangled were their tiny bodies by the abortion procedure.

But we do know that their lives mattered. And we know that they were loved, if only after death, by the pro-life activists who rescued and buried them, in a powerful witness to their humanity.

On Saturday, September 13, you are invited to make that same witness by participating in the National Day of Remembrance for Aborted Children. Solemn prayer vigils will be held at the burial places of aborted children, as well as at other memorial markers set up in their honor.

Come out and honor the gravesites of our unborn brothers and sisters on September 13. Show your love for the innocent victims of abortion by mourning for them on this special day. (Find a nearby memorial service here.)

We’ll never get to see what these children’s lives might have meant for us, had they been born—who might have shown up at their funerals had they been given the chance to grow old like Old George.

But we can visit their graves and mourn for what might have been, and in so doing acknowledge what a tragedy it was for them to lose their lives so young.