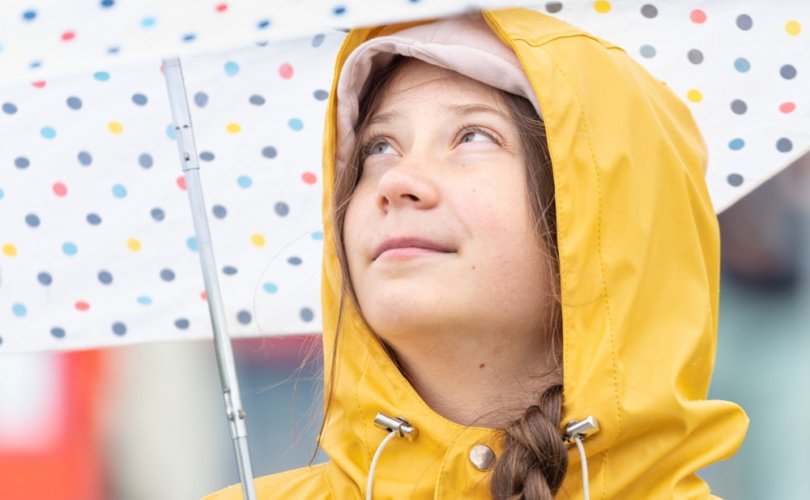 September 30, 2019 (American Thinker) — Those who are befuddled and beleaguered by climate nonsense look to Greta Thunberg as if she were another Joan of Arc. Those of us who live in reality see her as being hopelessly mired in the arrogance of untruth. Yes, Greta's childhood has been stolen from her, but it isn't America that's done that – it's her parents, who have allowed her to be prostituted in this manner. It is the leftist politicians and their ilk, who are milking her youth and gullibility and her hunger for acceptance, who have stuck her up on a tilting pedestal. I'm as uncomfortable watching her as I am seeing a parent mistreat a child in public. Humiliation is coming at her like a locomotive, and no one is yanking her off the tracks.

Let's explore this comparison with the French teenager who was martyred in her attempt to free France from English control. She was a devout, if untutored and illiterate, Christian. She was, from the age of 13 until her death at 19, sure she saw visions of saints who told her what she must do. She was amazingly successful. Her followers, who included King Charles VII, believed in her — a young girl in the 15th century! — and allowed her to command their troops in battle.

One of the first non-fiction books I read as a child was entitled Candle in the Sky, a biography of Joan of Arc. I read it over and over, completely astounded. Something very unusual was going on with her, and after 50 years of intense Bible study and further reading about the Maid of Orléans, I am still mystified. She believed so strongly in the divinity of her mission that she let them burn her at the stake, and yet I am unsure what concern God had in France maintaining its sovereignty, but God is the only way to even begin to grasp what happened there. He does, after all, control history.

Now look at Greta. If God had anything to do with what she's up to, she'd understand that He has everything planned and that, in spite of human free will, the world will continue as long as He wants it to. She would know that saving the world is not a job for mere humans and that we can't possibly be important or powerful enough to alter the carefully tuned workings of this astounding machine we call Earth.

But, alas, she knows very little, and what she thinks she knows makes her very angry. She shouts, “How dare you!” at her audience as if merely staying alive in this world is something we've all done to offend her. She shouts about “mass extinction” as if a half a degree of warming over a century will have us all choking to death in the streets. She moans about losing her childhood and missing school. Joan once said she would rather be “spinning wool at her mother's side” than commanding armies, but she screamed no accusations at the French people. She merely cited her divine mission and went off to war. Even when she was burning to death, she said only two words: “Blessed Jesus.”

Joan actually accomplished what she set out to do. She wanted Charles VII recognized as the legitimate heir to the throne. She wanted the English tossed out of France. This was at the end of the Hundred Years' War, which had followed close on the devastation of the Black Plague, and France was nearly destroyed by those two horrors. Historians generally credit Joan with saving France.

Will Greta of Thunberg be credited with anything so grand? Unlike the Maid, Greta hasn't done anything concrete. She has expressed no tenable suggestions about what we should do or undo, let alone set anything substantial in motion.

Young people can make a difference –- look at what Boyan Slat, the Dutch boy who has been working now for several years to design a system that will clean our oceans and who appears to be succeeding. He has screamed at no one, accused no one, nor has he attempted to change the way his fellow humans live. He just went to work — as Joan did.

Both Greta and Joan are different from their contemporaries. Greta suffers from autism/Asperger's and no doubt has to cope with the social rough spots associated with being on the spectrum. Joan had visions — most people don't. Our modern secular viewpoint has historians wondering what sort of schizophrenia haunted Joan — but despite her diagnosis, going off to war at 16 — in the 15th century — had to cause some seriously awkward social situations. In fact, it is said that she requested that Charles supply her with armor partly because she felt it would protect her from sexual attack.

These two young girls — both highly motivated — were set in motion by two very different forces. Greta is terrified. She seems to really believe that she will be dead in 11 years. Her fear is palpable — so much so that she is infecting thousands of other unstable young people, and fear is only useful for fleeing or fighting. Fear never produces tangible improvements — only ill health and anger.

Joan, on the other hand, was motivated by love — love of her savior, love of her country. She was motivated by duty to both. She showed very little fear in her short life, and what fear she felt, she controlled. Just before her immolation, she asked two priests to hold a crucifix up for her to stare at as she died. Such incredible courage. She was so brave that she struck fear in the hearts of her enemies. The English burned her three times to make sure that nothing was left.

Greta will not meet such a fate, but one that is perhaps worse. She will either live long enough to find out what a fool she was and how people used and abused her, or she will never connect with reality and will live out her days as frightened as she is now. There's no happy place on her horizon.

Not unless she too begins seeing divine visions.

Deana Chadwell blogs at www.ASingleWindow.com. She is also an adjunct professor and department head at Pacific Bible College in southern Oregon. She teaches writing and public speaking.