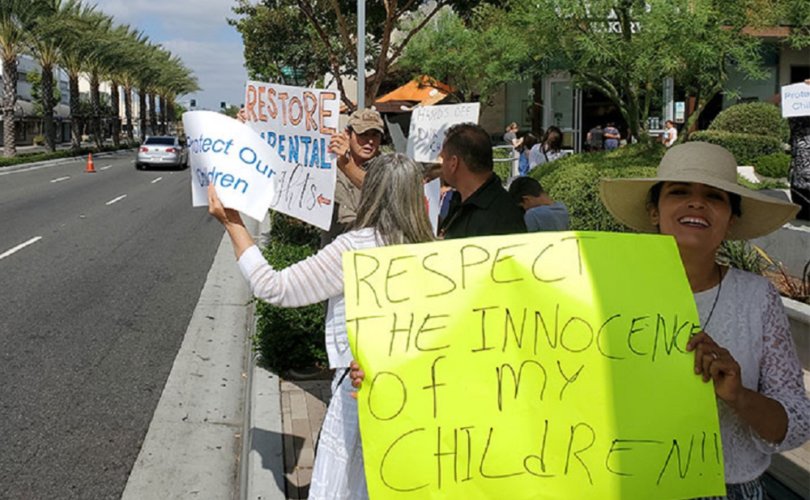 November 25, 2019 (MassResistance) — Back in mid-September, MassResistance began exposing the horrors of the “Teen Talk” graphic LGBT/sex-ed curriculum that the Downey, CA School Board had recently approved for the high school and middle school.

Dishonest school officials led parents in this largely minority, working-class suburb of Los Angeles to believe that this was a benign program. But when the ugly details about it were revealed, the parents were shocked and horrified.

Informed parents insisted that this must be stopped! But the biggest problem was that most people in the community had no idea what was happening (and the School Board took advantage of that)!

So the new Downey MassResistance chapter led by Sandi, a district mother, got right to work reaching out to more parents, local churches, and city leaders to raise alarm about this upcoming curriculum — and mobilize them to take action immediately.

1. Leafletting outside of schools

Within days, Sandi and other parents began passing out flyers (see above) in front of some of the Downey schools. The flyers described the curriculum and invited parents to a meeting about it at a local church in Downey. Many of those parents were outraged about what was going on and they wanted to learn more.

When some parents took the flyers to their school principal, the principal and other school officials told parents that MassResistance parents “were lying” about the curriculum, and tried to discourage parents from coming to MassResistance's planned information meeting. Soon the pastor of the church where the meeting was scheduled began receiving threatening phone calls. (This is similar to the pattern we saw in Chula Vista, CA.) But he stood firm, and the meeting was a success. Nearly 40 new people came to that first meeting.

2. Meetings to educate and mobilize parents

MassResistance held several meetings for parents and others at various locations in Downey over the past two months. Arthur and Shanda, the head of our Southern California Mass­Resistance chapter, brought them up to speed on the sex-ed issue and gave them some valuable activist training.

In their presentations, Arthur and Shanda talked about the terrible lesson plans and sexually explicit pictures in the “Teen Talk” sex-ed curriculum. They explained the Planned Parenthood origins of “Teen Talk,” including the appalling philosophy of Planned Parenthood founder Margaret Sanger and the corrupt and medically false sexuality research of Alfred Kinsey (who claimed that children are “sexual from birth”).

Arthur and Shanda urged Downey parents to attend the next series of School Board meetings. They provided them with talking points. They told them about their rights at Board meetings. In many cases, parents are afraid to speak out or even bring signs because they don't know what their rights are. California actually has very good open meeting laws, and Arthur explained those rights. He also described action plans to get rid of the curriculum.

We have had great success getting local Downey churches to work with us to get the information out as well as host our MassResistance meetings.

At one of the meetings, several local business leaders and church leaders attended. They offered to allow Arthur, Shanda, and Sandi to present their PowerPoint presentation to more churches, and before more community leaders. Those meetings were a great success!

Parents prominently demonstrated and protested, including outside of the local office of their State Assembly member — who voted for the horrible “comprehensive sex ed/LGBT” bill that is causing all this trouble. It raised awareness got a lot of positive reaction. Many people stopped and signed up to get involved.

4. Canvassing door-to-door and in public venues

For the next step, Arthur, Shanda, and Sandi organized parents to walk various precincts on the weekend, going door-to-door, informing as many parents as possible in the Downey community.

The flyer, written in both English and Spanish, encourages residents to contact the School Board and demand they repeal Teen Talk — or get voted out in the next election. It also invites people to get involved with MassResistance and to go to the upcoming School Board meeting to let them know in person how offensive this is to them.

Residents were quite receptive to our message, and many eagerly signed up to get involved. People were shocked that their school district would implement a sex-ed curriculum that was so explicit, vulgar, and inappropriate. Several immediately began contacting their School Board members by phone and email.

Building up the army — a big success!

To say the least, it's been an exhilarating two months in Downey. More parents, church leaders, community leaders, and business leaders than we hoped for have joined this effort!

Coming up next: The parents confront the School Board!

When parents are educated about the issue, know their legal rights before a School Board, and are unafraid of the Left, that's a very powerful combination!

Coming up: You'll see photos and video of parents aggressively confronting their School Board — and making progress.