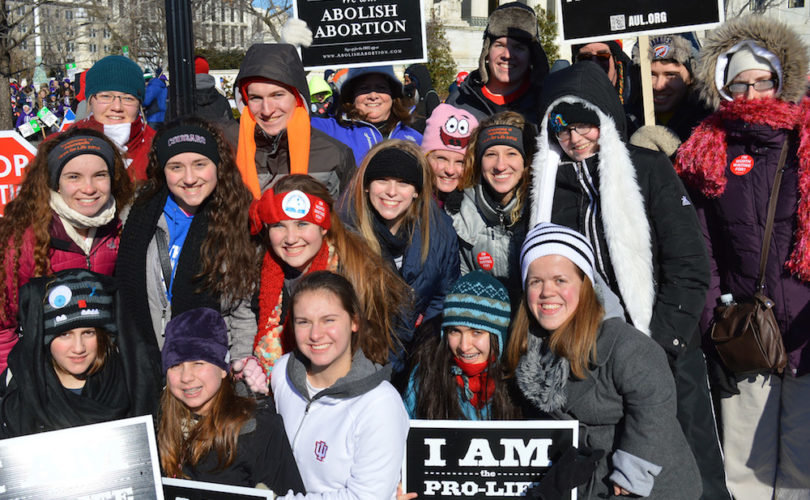 Jessica Valenti of The Guardian has come out with an announcement: “Welcome to the beginning of the end of the anti-abortion movement.”

Valenti’s columns are usually good for a laugh—she’s constantly opining on the sinister right-wing plots of octogenarian priests to force all women to have a least a dozen children for the Mother Church (or something to that effect. She doesn’t make a lot of sense.) But considering the fact that the term “pro-choice” has become so stigmatized even Planned Parenthood is abandoning it, this one is especially amusing. I’m tempted to just paraphrase Mark Twain and note that news of our demise has been greatly exaggerated (as it has time and time again), but just in case anyone gets taken in by this drivel, let me highlight three reasons that Valenti doesn’t know what she’s talking about.

1. She says “the movement swears its protestors are kindly grandmothers.” Not only has Valenti obviously never seen a pro-life protest or outreach event, she hasn’t even seen a news photo of a sign at a pro-life event (the most popular of which is now “I Am The Pro-Life Generation.) Young people are surging to the pro-life movement on both sides of the border in unprecedented numbers, causing former NARAL head Nancy Keenan to note the crowds at the DC March for Life with dismay, “I just thought, my gosh, they are so young. There are so many of them, and they are so young!” The pro-life movement is a movement of thousands of young people reaching out to other young people on why we shouldn’t be killing the youngest people. Our grandmothers, though, are very supportive and incidentally don’t read The Guardian.

2. Valenti claims that the pro-life strategy of passing legislation to shut down abortion clinics, although “hideously effective” (According to The Guttmacher Institute, more abortion restrictions were passed between 2011-2013 than in the entire previous decade) is actually evidence that we’re losing! Our approach has “narrowed,” she claims—although if she’d done even a moderate amount of research, she would have discovered that the pro-life movement simply realized that shutting down clinics permanently was more effective than shutting clinics down temporarily by physically blocking clinics. In the meantime, full-scale educational efforts have seen their fruit in polls slowly indicating a growing number of Americans calling themselves pro-life. One only has to watch this Bill Moyers interview with a stressed-out and edgy Planned Parenthood president Cecile Richards to realize that it is the abortion “rights” movement that is in full crisis mode.

3. Basically, Valenti claims every pro-life tactic—from sidewalk counselling (which features evil bullies that, if you listen to her, closely resemble Disney villains), to Crisis Pregnancy Centres (where quack science such as embryology is used), to legislation restricting abortion clinics (because we don’t care for butcher shops like Gosnell’s House of Horrors, or any other dead-baby-producing establishment)—is a sign of demented desperation. Actually, based on our track record thus far, it is simply a sign of smart strategy combined with a helpful thing called “the truth,” which in regards to abortion, can be found in any embryology textbook which Valenti has not read. If she wants to write about the pro-life movement, she might want to actually take a closer look at our movement so she knows what’s going on. She’d still be outraged, sure. But she’d be less bewildered.

One final point: The only way the anti-abortion movement will “end” is if abortion “ends” and our culture stops glorifying as a right this barbaric version of in-utero infanticide. Which isn’t all bad for Ms. Valenti, I suppose. She will have occasion to write many more such columns.