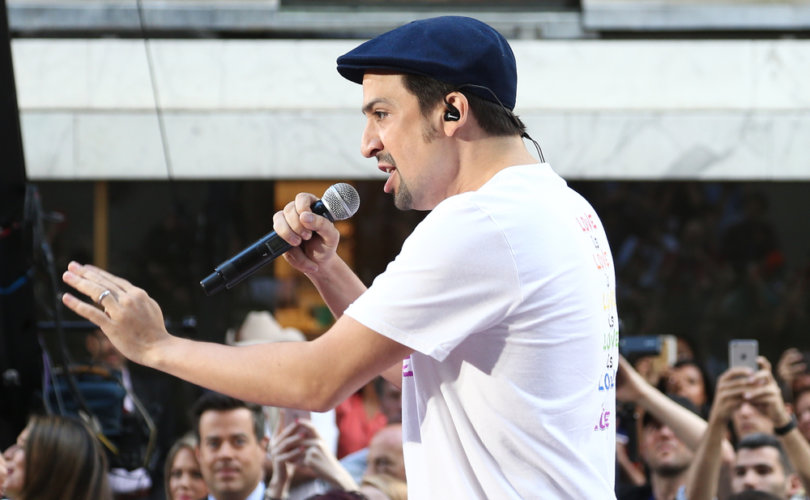 (LifeSiteNews) — Like thousands of theatre fans across the country and world, I have seen Hamilton in person and via streaming service. It’s an exciting adaptation of Alexander Hamilton’s life before and after the Revolution set to rap and hip-hop music. I have said more than once that Lin-Manuel Miranda — its writer and creator and the man who played Alexander Hamilton in the original production — is absolutely brilliant.

I don’t know much about Miranda’s personal life, but what I know of his professional life is impressive. Hamilton is a work of pure genius.

That’s why I was so disappointed when an ad for Ham4Choice popped up on my Facebook feed a couple days ago. In the short clip, Miranda introduces a contest inviting people to donate at least $10 to Ham4Choice.

Upon doing so, they will be entered in a lottery to win tickets to productions of Hamilton in many venues around the world. The money raised goes to pro-abortion organizations like Planned Parenthood, the National Network of Abortion Funds, the Tucson Abortion Support Collective, and other “grassroots” abortion organizations.

In the video, Miranda and cast members trade lines about Ham4Choice, calling the aftermath of Dobbs a “crisis.” They then invite supporters to join them “and all the companies of Hamilton as [they] fight for access to care by providing support and reproductive care for those who need it.”

A visit to the Ham4Choice site finds this description from Hamilton and Friends: “We are devastated by the U.S. Supreme Court’s ruling eliminating the right to abortion which has been a right since 1973. In response, we are teaming up with organizations providing support, access, and travel expenses to those seeking these services…We’re stronger when we work together. We can stand up for every person’s right to make decisions about their own body and their own lives.”

Every person’s rights? It seems they are forgetting about the baby’s rights.

It’s almost ironic because Miranda’s character in Hamilton loves his preborn baby before he’s even born. In the show, there are two poignant scenes in which Alexander Hamilton expresses this love.

During a song called “That Would Be Enough,” Hamilton sees his wife, Eliza, for the first time after finding out that she’s pregnant. He has returned home despondent after being dismissed from his position as George Washington’s right-hand man. Eliza tells him that his life is a gift and that, if he stayed alive and out of the war, that would be enough for her.

She then says, “If this child shows a fraction of your smile or a fragment of your mind, look out world, that would be enough.” The song ends with Hamilton looking lovingly at Eliza’s belly, touching it, and saying something inaudible. Clearly he knows she is carrying a baby.

Later in the show, in a song called “The World Turned Upside Down” set just before the Battle of Yorktown, Hamilton sings about the possibility that he may not survive the battle. But then he thinks about Eliza and reminds himself: “My Eliza’s expecting me. Not only that my Eliza’s expecting.” And just a line later, he says he has to stay alive and “meet my son.”

At the end of that same song, he says with tears in his eyes, “Gotta start a new nation, gotta meet my son!”

This child not yet born was already so loved.

These scenes were portrayed so tenderly, as if there could be no other way to do so. Miranda wrote the musical, so he didn’t have to include these scenes or these words. But he did.

And therein lies the disconnect. Those who are pro-abortion fight for wanted babies but discard unwanted babies. They don’t seem to realize that the humanity of a baby doesn’t change based on what someone else thinks about him or whether or not his arrival is “convenient.”

I like to think that maybe people like Lin-Manuel Miranda are so misguided and wrapped up in being “woke” that they don’t take the time to really understand or think about the horrors of abortion.

— Article continues below Petition —
PETITION: Stop Walmart from pushing abortion for employees
Show Petition Text
5395 have signed the petition.
Let's get to 6000!
Thank you for signing this petition!
Add your signature:
Show Petition Text

We hear story after story of former abortionists who believed at the time that what they were doing was right and that it would “help” women. I would like to think that the same thing goes for many people who are pro-abortion. I would like to think that they just don’t understand the reality or that no one has taken the time to show them a developing baby, to talk to them about the fact that all people have value, to express the fact that even a tiny preborn baby has the right be born, to teach that there is no “right” to abortion, or to clarify that healthcare is an act that improves the life and health of the mother instead of one that kills a baby.

If I could talk to Miranda, I would implore him to think about the humanity of the preborn baby. I would remind him of the amazing work he has done with helping the marginalized succeed. Hamilton is known for casting minorities in most of its roles. I want him to see that preborn babies are the most marginalized of all people, for they truly have no voice.

I would implore him to use the funds he has raised to truly help moms and babies by offering support that doesn’t end in death. I would tell him of the amazing work that crisis pregnancy centers do every day. I would ask him to spend a day or two at one of these centers listening to women’s stories, seeing the chubby cheeks of newborn babies, and hearing moms who are overjoyed because they don’t have to live with abortion regret. I would ask him to read the stories of abortionists who made a living tearing babies apart and why they changed their minds. I would then tell him that it’s not about choice; it’s about protecting the vulnerable—vulnerable moms and vulnerable babies.

Miranda has changed lives by casting minorities in Hamilton. I suspect that many were given a chance when no one else would take a chance on them. This is what pro-lifers do for preborn babies. We help give them a chance when the world is set on killing them.

If only those who are pro-abortion could see all this and do the same, we would truly turn the world upside down.