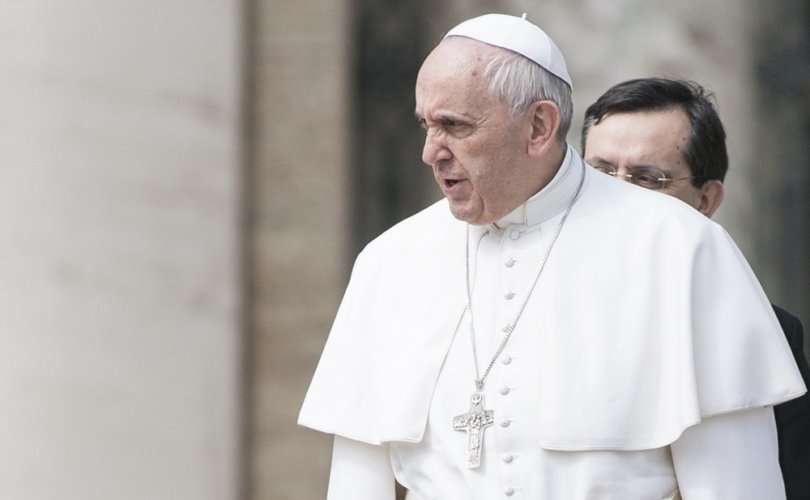 February 13, 2019 (LifeSiteNews) – On January 29th Pope Francis, in addressing the bishops of Central America during his trip to Panama, attacked a certain kind of Catholic journalism.

Now, it was evidently not dissident, left-liberal publications such as the National Catholic Reporter or the London Tablet that had prompted the Holy Father’s grave concern. On the contrary, he was clearly lambasting precisely those media that make a point of upholding Catholic tradition and orthodoxy. The Pope accused them of removing “the compassion of Christ” from its “central place in the Church” and excoriated their “condemnation, cruelty, exaggerated self-praise”, and indeed, their “denouncing of heresy”. It seems worthwhile to situate remarks of this sort in their broader historical context.

Early in the 20th century, certain trends in the Church which aimed at reconciling Christian thought with modern scholarship, but which, in effect, emptied many central Catholic beliefs of their essential content, were condemned very severely by Pope St. Pius X under the name of Modernism.

It is generally recognized today that this response, though necessary, was sometimes implemented over-zealously, so that a number of loyal clerics (including the future Pope John XXIII) were unjustly penalized or denounced in the general climate of suspicion. Indeed, the holy Pontiff Pius X himself recognized that some persons were accused without real foundation. It was in a sense “open season” on heretics.

Today, however, it is remarkable how the mood in the Catholic Church has swung to the opposite pole since the days of the anti-Modernist movement. Every Catholic familiar with today’s diocesan chanceries and the religious educational establishment – whatever his or her own position on the theological spectrum – is aware that while few will openly deny that heresy is theoretically possible and (if real) harmful, the whole atmosphere, the social consensus, the emotional ambience, is strongly oriented towards tolerance of novelty. The heretic has been replaced by the “heresy-hunter” (or “right-winger”) as the perceived source of division, and as the object of suspicion and ostracism. The favored words among our ecclesiastical and academic élites are “pluralism,” “openness,” “dialogue,” and “flexibility”; and the attitudes most generally resisted and feared are “intransigence,” “ultraconservatism,” “fundamentalism,” “rigidity,” and “closed-mindedness.”

There is no denying that the resulting tension causes much pain and division. It would be comforting to think that further charity and patience all round might be sufficient to heal the breach. But if bad will is not the problem, no amount of good will can be expected to provide a solution.

As I see it, the underlying conflict in today's Church is not necessarily one of bad will versus good will: it is of a spiritual and intellectual nature. If we start from the assumption (conscious or otherwise) that Christian faith is first and foremost a matter of feeling and experience – a personally “lived experience” of God's love manifested through Jesus – then creeds, doctrines, moral precepts and definitions of orthodoxy will all be seen in the last resort as “surface” phenomena. They will all appear as attempts (necessary but inadequate) to reflect on and formulate that which is ultimately inexpressible – the primordial, rock-bottom religious experience. To someone who thinks like this, the “heresy-hunter” is simply incomprehensible: he seems to be obsessed and agitated about all the wrong things – things which really aren't all that important.

If, on the other hand, we begin by assuming that faith is more fundamentally a matter of the head than of the heart – “fundamentally” in the literal sense that a “personal experience” of God is the apex, not the basis, of the Christian life, and should itself be built on intellectually defensible rational assent as its foundation – then one's whole perspective becomes radically changed. From this standpoint, logical consistency and the unswerving defense of propositional orthodoxy assume an absolutely central role – the sine qua non.

This second standpoint is the historic position of Catholic Tradition and the Magisterium, and it is under heavy fire today. We live in the age of what the German theologian Karl Rahner (in his earlier, more orthodox days) called “cryptogamous heresy” – heresy which cannot readily be pin-pointed or “nailed down” with precision, because it consists chiefly of underlying emotional attitudes rather than clearly intelligible propositions. As Rahner said, it “often consists simply in an attitude of mistrust and resentment towards the Church's Magisterium, in a widespread feeling of being suspiciously and narrow-mindedly supervised.”

In short, it is the heresy of hating “heresy-hunts” more than heresy itself. And it is  disturbing – though, after six years of Francis’ pontificate, scarcely surprising – to hear Peter’s Successor, in expressions that clearly come from his heart, reveal the same deep-seated emotional attitude that Rahner warned against. How very different is that pure and timeless Catholic spirit displayed by Cardinal John Henry Newman in his great Apologia: “From the age of fifteen, dogma has been the fundamental principle of my religion: I know no other religion; I cannot enter into the idea of any other sort of religion; religion, as a mere sentiment, is to me a dream and a mockery.”

Editors’ note: Except for the addition here of two new opening paragraphs and the second sentence in the last, the above article was first published more than thirty years ago under the title “Hunting the Heresy-Hunters” in the Oblates of Wisdom journal Living Tradition (no. 14, November 1987). Fr. Harrison suggested we republish it, since it seems if anything even more timely now than it was then. Nevertheless, he doesn’t see his observations as having been “prophetic”; for he says that when he originally penned them three decades ago he never suspected a time would come when this modernistic inversion of authentic Catholic priorities would reach all the way to the See of Peter.