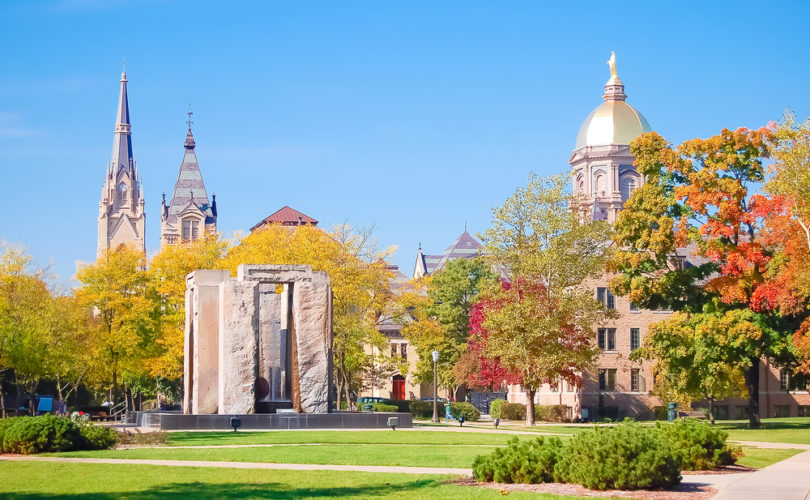 The central campus of the University of Notre Dame. Chuck W Walker / Shutterstock.com

This article was originally published by The Irish Rover, October 13, 2021.

Perhaps it is assumed that because the debates on these topics have subsided, there is simply nothing left to discuss. Indeed, secular culture assumes the acceptance of same-sex unions as universal. It turns now towards transgenderism, among other issues. Discussions surrounding the nature of marriage as a union between one man and one woman have gone extinct from the public, including at the University of Notre Dame; now, debates rage regarding the definitions of “man” and “woman.”

The university may believe that she navigates the issue well, but she in fact simultaneously professes Catholic teaching and espouses a secular movement in opposition to the Church’s position. The result? Incoherence.

While the university’s decisions may be motivated by genuine good will, diligent attention to love of neighbor, and desire to evoke a nuanced understanding, the apparently whole-hearted espousal of the secular LGBT agenda leaves many members of the Notre Dame community confused and concerned.

In 2012, the university published the pastoral plan “Beloved Friends and Allies,” which articulates the framing paradigm for “the support, holistic development and formation of students who identify as GLBTQ [sic], as well as their heterosexual friends and allies.” The pastoral plan repeatedly emphasizes that the university’s “goals and objectives, as well as its programs and initiatives, are consonant with the teachings of the Roman Catholic Church.”

The plan extensively cites the Catechism, as well as USCCB documents regarding ministry to LGBT individuals, affirming the natural law tradition of the Church’s teaching that “sexuality is ordered to the conjugal love of man and woman.” This document remains an active and relevant part of the university’s engagement with the LGBT community.

But, the university announced its decision to extend employment benefits to legally married same-sex couples in 2014. The university did so without coercion of civil law. University president Fr. John Jenkins praised this decision as an effort undertaken “to provide support and welcome gay and lesbian members of our community.” He stated, “These efforts must not and will not flag.”

This past June, the university announced its first ever celebration of Pride Month. The diversity and inclusion page of the university’s website published an article which draws exclusively upon President Biden’s “Proclamation on Lesbian, Gay, Bisexual, Transgender, and Queer Pride Month, 2021” in an effort to “raise awareness about efforts for equal justice and equal opportunity for the LGBTQ+ community” during the month of June. The article directs curious readers to the website of the Human Rights Campaign, the largest LGBT advocacy group lobbying organization within the United States, for information on “what it means to be an ally in the effort to achieve equality for all.” The article does not allude to the Catholic Church or her teachings in any way.

Just this week, on October 11, PrismND (Notre Dame’s official LGBTQ+ undergraduate organization) and Baumer Hall co-hosted a “Coming Out Day Celebration.” Fr. Robert Lisowski, C.S.C., rector of Baumer and recently-ordained priest, attended the event wearing a rainbow stole which matched the pride flag hanging on the wall directly behind him. When asked for comment on his involvement with the event, Fr. Lisowski told the Rover, “My presence at this event was simply to affirm, support, and celebrate the dignity of every human person as a child of God. We prayed in gratitude for the unique gift that every person is [and] for an end to discrimination.”

Other erosive occurrences disclose the university’s adherence to secular standards set by the LGBT movement. The home page of the ND Student Government website displays a picture of the student government executives in front of a pride flag. The College of Arts and Letters now accommodates students’ preferences for the use of singular “they/them” pronouns in news articles. And this fall, Notre Dame Press published the book Gay, Catholic, and American written by Greg Bourke, who was a named plaintiff in Obergefell v. Hodges (2015), the decision that legalized same-sex unions nationwide.

Furthermore, no student can escape Welcome Weekend, which emphasizes the necessity of allyship. Student leaders receive instruction to use inclusive language, have “inclusive thoughts,” and wear rainbow pins to demonstrate their commitment as allies. But allies to what? To the recognition that students who experience same-sex attraction are human beings created in the image of God and loved immeasurably by Him? Or to the secular agenda that promotes the normalization of same-sex unions, transgenderism, and other cultural phenomena, institutions, and movements in direct opposition to Church teaching?

The lack of clarity in the university’s approach to LGBT issues is highly problematic. On the one hand, the university professes a Catholic mission and articulates a faith-based vision for the inclusion of the LGBT community in “Beloved Friends and Allies.” On the other hand, the university promotes signs and images laden with secular meaning. The pride flag cannot be separated from the secular LGBT movement and the ends it seeks — ends which are directly contrary to Catholic teaching. How can the university have a holistic and intrinsically Catholic response to the LGBT community if she merely appropriates secular images and slogans? Why does the university look to the world for solutions, rather than turning to the truths of faith?

It should be noted that Notre Dame is not unique in her incoherent response to the challenges raised by the LGBT agenda. The Catholic Church finds herself internally troubled by dissent from her teachings on gender, sexuality, and doctrine. This is not mere individual disagreement, but institutional rebellion. Notably, the German bishops have persisted in their decision to bless same-sex relationships, despite the Vatican’s repeated clarifications on Catholic doctrine.

A March 2021 Responsum of the Congregation for the Doctrine of the Faith regarding the action of the German bishops succinctly and elegantly expresses the Church’s response to challenges to her teachings on sexuality: “The Church recalls that God Himself never ceases to bless each of His pilgrim children in this world, because for Him ‘we are more important to God than all of the sins that we can commit.’ But he does not and cannot bless sin: he blesses sinful man, so that he may recognize that he is part of his plan of love and allow himself to be changed by him. He in fact ‘takes us as we are, but never leaves us as we are’.”

Properly nuanced, the Church’s teachings on sexuality are simple. In light of Catholic doctrine, Notre Dame should recognize the incoherence of her current position. Her current approach confuses, rather than models, Church teaching. In order to resolve her current incoherence, the university must choose between two conflicting views — one Catholic, the other secular.

The implications of this choice are dramatic; each departure from doctrine erodes the Catholic character of the university. If the university adheres to secular standards on LGBT issues, what else will she be willing to surrender? When truth capitulates to untruth, what shall stand?

The university should cling to the truth, especially when the social cost is high. She may not attract allies, but she will flourish in her witness to Christ’s invitation of authentic love, sacrifice, and transformation.

Reprinted with permission from the Irish Rover