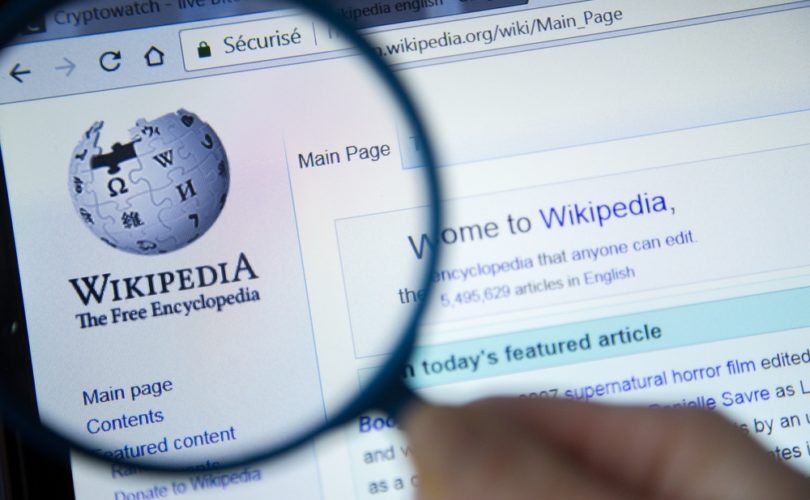 April 30, 2021 (LifeSiteNews) – The other day, I added LifeSiteNews to an article on Wikipedia about people and groups who have been suspended by YouTube (YouTube suspensions). When I attempted to add a link to LifeSiteNews, I got an error message stating that I was adding a link to a “deprecated source, generally considered unreliable after discussion by the community.”

I published my changes without the link but did so grudgingly. Who is this “community” that determines such things, and what evidence did they use to determine that their 1.7 billion unique visitors per month should be protected from the dangers of LifeSiteNews?

You can read the discussion the community had here.

My take on their discussion is that the Wikipedia “community” trusts so-called “fact-checking” sites like snopes.com blindly while ignoring the bias of such sites. For instance, the largely derogatory LifeSiteNews Wikipedia page shares an article from Snopes that slanderously states LifeSiteNews is a “known purveyor of misleading information.”

In this article, Snopes discusses an article by LifeSiteNews about Georgia ACLU employee Maya Dillard Smith, who, the article alleges, retired from the ACLU after her daughters were disturbed by transgenders in their bathrooms. Snopes does not say the article was false or even misleading. It just calls the article “unproven.” Evidently, fact-checking sites can now merely label something as unproven and feel justified in calling an organization a “purveyor of misleading information.” The truth is always misleading if you are determined to go down the wrong path!

Another “fact-checking” website called “Media Bias” claims that LifeSiteNews is a “questionable source.” They rate LifeSiteNews as far-right “for story selection that always favors evangelical Christianity”! If they had bothered to open the LifeSiteNews website, they would know it presents more of a Catholic worldview than an evangelical Protestant one.

It’s a shame that fact-checkers know so little about Christianity but yet they are the ones who presume to tell their readers what is true and what’s a lie. “Media Bias” also rates LifeSiteNews as “questionable based on the promotion of conspiracy theories, pseudoscience, and many failed fact checks.” All five of their so-called failed “fact checks” can be dismantled if only given the chance, but there’s no room for rebuttal or defense. For instance, one of them is another Snopes article about LifeNews, NOT LifeSiteNews. Apparently, fact checkers can be as sloppy as they want and the Wikipedia community will trust them before they trust LifeSiteNews.

The founder of Wikipedia, Larry Sanger, left the organization years ago, calling it “Broken beyond repair.”

“He has also criticized Wikipedia for what he perceives as a leftist and liberal ideological bias in its articles,” his own Wikipedia page says.

After my experience trying to edit the Wikipedia articles about LifeSiteNews, I think Mr. Sanger must be right.

Wikipedia talks a nice game about being a charitable, unbiased organization. But it’s worth noting that the website’s budget is now $126 million and its list of benefactors includes the likes of the Johnson & Johnson Matching Gifts Program, Pfizer Foundation Matching Gifts Program, and Bill and Melinda Gates Foundation. Perhaps that, more than anything else, helps explain why the “community” has been deprecating links to LifeSiteNews.

Readers interested in becoming Wikipedia editors can learn about the process here, here, and here.