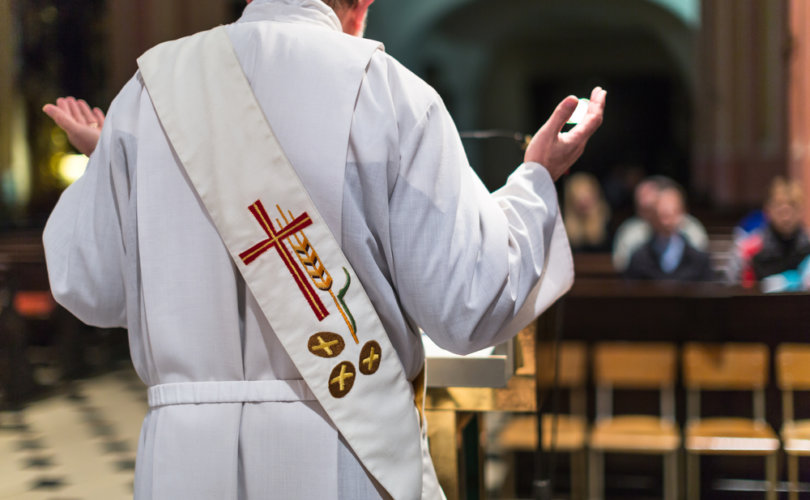 Editor's note: The following article is reprinted with permission from The Christian Review.

And when they went their way, Jesus began to say to the multitudes concerning John: What went you out into the desert to see? a reed shaken with the wind? (Matthew 11.7)

In earlier columns, I’ve expressed concerns about the moral leadership of the Catholic Church during this presidential campaign. I received a response from the communications director of one bishop, which I published with his permission.  The flurry of comments both here and on my Facebook page led me to think more about just what Catholics should expect from our bishops, priests, and other religious.

In the Catechism of the Catholic Church we read, “The Lord made Simon alone, whom he named Peter, the 'rock' of his Church. . . . This pastoral office of Peter and the other apostles belongs to the Church’s very foundation and is continued by the bishops under the primacy of the Pope” (881). Their first task, along with priests “as co-workers,” is “‘to preach the Gospel of God to all men,’ in keeping with the Lord’s command” (CCC 818, emphasis added).

If teaching is their first “task,” what is the reasonable explanation of what should be publicly taught during this, and any other, election campaign? The Ten Commandments are at the core of the Church’s moral teaching and the 5th Commandment, “You shall not kill,” is at the heart of that teaching. Why? Because as the Catechism puts it:

“Human life is sacred because from its beginning it involves the creative action of God and it remains for ever in a special relationship with the Creator, who is its sole end. God alone is the Lord of life from its beginning until its end: no one can under any circumstance claim for himself the right directly to destroy an innocent human being” (CCC 2258).

Human life is sacred and not “under any circumstances” can a person directly “destroy any human being.” Yet, we have the presidential nominee of the Democratic Party loudly advocating precisely that. Hillary Clinton has long been a champion of not just abortion but federally funded abortion-on-demand. Her Republican opponent, Donald Trump, rejects her pro-abortion advocacy and promises to sign a bill defunding Planned Parenthood, the largest U.S. abortion provider, when it passes the Congress. Those who don’t trust Trump’s promises should note that Hillary Clinton certainly does — in fact, she has pledged to “go further” than President Obama in providing federal funding for abortion.

This should not be surprising, since Clinton has made it clear: “the unborn person does not have constitutional rights.”

But Catholics can reasonably expect for them to loudly proclaim the Church’s teaching, “human life is sacred,” when the outcome of the coming election may put Hillary Clinton in the White House. Catholics should expect its “shepherds” to address the major issues facing Catholic voters as they determine how they will cast their ballots.

What are those major issues? Would anyone disagree that in addition to immigration, poverty, health care, and religious liberty that abortion is one of those major issues?  The myriad of pro-abortion speakers at the Democratic National Convention in Philadelphia certainly considered it as such. The Democratic Party platform was changed to call for the elimination of the Hyde Amendment which forbids federal funding for abortion — TIME called the platform “more extreme” than ever.

Have the bishops and clergy done what could be reasonably expected in response to the Clinton candidacy, the Democratic National Convention, and the Democrats' platform revisions? The sad answer is “no.” Yes, there are some bishops and priests reminding Catholics to consider the abortion issue in casting their ballots, but the number is pitifully small, resulting in virtual silence from the Church.

Many Catholics justify their support for pro-abortion candidates by insisting abortion is a private matter, but the Church does not agree:

“The inalienable rights of the person must be recognized and respected by civil society and the political authority. These human rights depend neither on single individuals nor on parents; nor do they represent a concession made by society and the state; they belong to human nature and are inherent in the person by virtue of the creative act from which the person took his origin. Among such fundamental rights one should mention in this regard every human being’s right to life and physical integrity from the moment of conception until death” (CCC 2228, emphasis added).

Hillary Clinton’s claim that the unborn have no constitutional rights is a direct rejection of what Catholics are taught to believe by the Church, a teaching which the bishops and clergy have as their “first task” to promulgate.

Yet, except for a few isolated voices, there is either complete silence or the limp claim that both candidates are flawed and that one candidate is “no better” than the other.

I could quote the Catechism of the Catholic Church at greater length, particularly on how “positive law” allowing abortion undermines the “foundations of the state” (2273). You would think that if such a teaching is taken seriously our clergy would realize that there is more involved in teaching Catholics about the evil of abortion, because at the same time they are defending the very foundation of law, society, and the state.  But no, nothing is being said, there is only silence.

When I recall what Jesus said about John the Baptist, “What went you out into the desert to see? a reed shaken with the wind?” it leads me to the conclusion that the wind has blown our shepherds to the ground.

Not sure how to vote in the U.S. election? Here’s Cardinal Burke’s advice