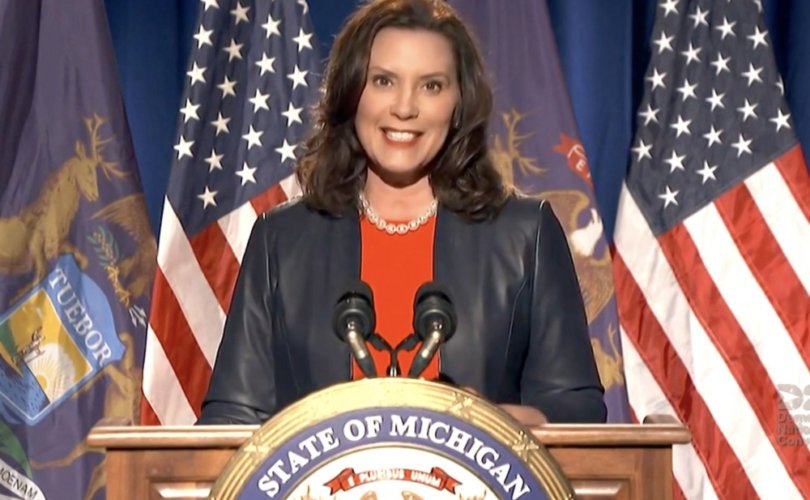 September 1, 2020 (American Thinker) — Jordan Warnsholz, a physician assistant in Michigan, put up a lengthy Facebook post detailing how the State of Michigan is harassing him personally and professionally. He contends that he is the victim of Governor Gretchen Whitmer's vindictive abuse of power.

In May 2020, Warnsholz was one of three people in the medical field who, along with a patient, sued Governor Whitmer; Michigan attorney general Dana Nessell; and Robert Gordon, the director of the Michigan Department of Health and Human Services. The basis for their complaint was that Whitmer's executive orders — which became a byword for overreach in the early months of the Wuhan virus panic — left the medical practice unable to offer necessary treatments to its patients.

Michigan, incidentally, is one of four states that the Department of Justice is investigating because of the staggeringly high death rates for elderly residents in nursing homes. The deaths of nursing home residents in Michigan, who constitute a minute fraction of the population, accounted for 32% of all Wuhan virus deaths in that state.

Because of Whitmer's sweeping orders, the plaintiffs, including Wanrsholz, alleged that patients suffered serious harm:

The medical practices involved said they haven't been able to repair feeding tubes or perform gallbladder surgery which has resulted in patients developing gangrene.

“Medicare is the older generation usually have a lot of health conditions on top of each other, diabetes, high blood pressure, heart disease kidney disease and without being able to monitor those these people could be heading straight into a medical life-altering emergency and we're seeing that in droves across the state,” said Jordan Warnsholz, a plaintiff in the lawsuit and the owner of Wellston Medical Center and Primary Health Services.

Warnsholz also said that his two practices have forgiven $214,000 in medical debt from patients since the pandemic started.

In his Facebook post, Warnsholz contends that, since filing his lawsuit, the state has harassed him, by initiating a phony criminal action again him, trying to destroy his livelihood, and threatening his custody over his children:

PLEASE SHARE, THE PUBLIC NEEDS TO KNOW THIS: I am going public to expose gov Whitmer for extreme criminal abuse of power…

Sadly, it's easy to accept Warnsholz's allegations at face value. As we've seen in 2020 America, state executives are drunk on their power to control their citizens, all in the name of protecting them from what's proven to be a nasty but not apocalyptic coronavirus. Worse, threatening to take away children has proven to be one of the statists' most potent weapon against parents who fight orders that would leave them unable to feed or shelter their children.

In Salem, Oregon, for example, hairstylist Lindsey Graham kept her salon open so she would not be impoverished. Governor Kate Brown, the same woman who has allowed 88 days of Wuhan spreading, blood-spilling, fecal-throwing violence to rage in Portland, sicced Child Protective Services on Graham, just as Whitmer seemingly has done to Warnsholz.

When it comes to hairstylists, Michigan relentlessly pursued 77-year-old Karl Manke for trying to keep food on his table. Meanwhile, it allowed politically correct gay swingers' clubs to operate.

Other states have been just as bad. In Texas, an overzealous Dallas prosecutor and a smug judge sent hairstylist Shelley Luther to jail for trying to keep herself and her employees solvent. In New Jersey, Governor Murphy is doing anything he can to destroy the owners of Atilis gym.

To date, Democrat governors, especially Whitmer, have proven to be power-hungry and vindictive. It will be interesting, therefore, to hear Governor Whitmer's side of the story when it comes to the allegedly retaliatory actions that Warnsholz claims the state has taken against him.