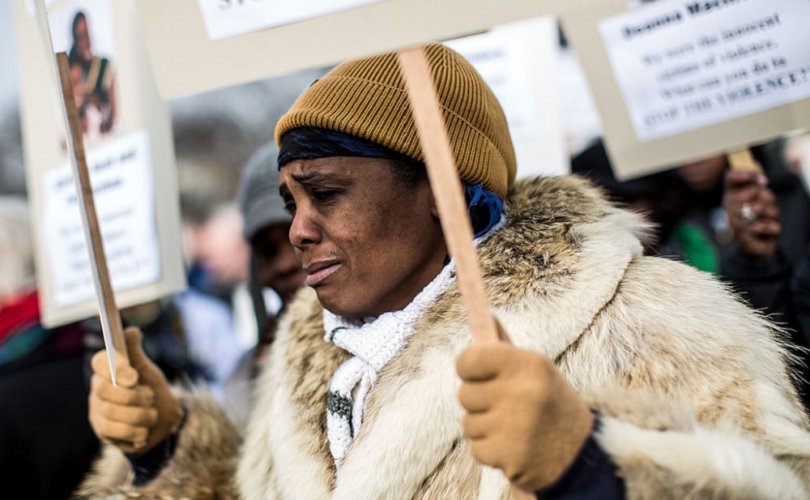 December 24, 2019 (American Thinker) — Movita Johnson-Harrell seemed to take pride in her position as the first Muslim woman elected to the Pennsylvania State Legislature. Now that record will forever have an asterisk next to it, as Johnson-Harrell has turned herself in to Pennsylvania attorney general Josh Shapiro's office, pleading guilty on charges of perjury, record-tampering, and embezzling over $500,000 in Medicare, Medicaid, and Social Security disability funds, as well as donations to Motivations Education and Consultation Associates (MECA), a charity she established to allegedly serve the mentally ill and drug addicted poor in her predominately African-American neighborhood.

In a press conference, Attorney General Shapiro described Johnson-Harrell's actions as “brazen corruption … her theft knew no bounds.” Johnson-Harrell stole funds that personally belonged to the residents of her facilities and used the money to purchase fox furs and trips to Mexico, to make payments on a Porsche, to pay delinquent utility bills, to cover her granddaughter's private school tuition, and even to fund her political campaign. After the facility, where residents were living in squalor, was closed, Johnson-Harrell continued collecting their rent from MECA even though the facilities were no longer operating.

Perhaps unsurprisingly, Johnson-Harrell's dereliction of duty extended to her short time as a Pennsylvania state representative.

During her brief period in office, Johnson-Harrell seemed to spend the majority of her time celebrating herself as the first Muslim woman elected to the state Legislature, and helping to fundraise and advocate for the Hamas-linked Council on American Islamic Relations (CAIR).

Two months after being in office, Johnson-Harrell flew across the country to Washington State to stand with anti-Israel BDS-supporter Congresswoman Ilhan Omar at a CAIR fundraiser with a separatist theme “Muslim Power for 2020 & Beyond.”

Two months later, she made an appearance at the Muslim Ummah of North America convention in Philadelphia over the July 4 weekend, where she shared the stage with numerous extremists all speaking out for a surge in Islamic political influence in American life. Johnson-Harrell added her political voice to this worrisome rhetoric, calling on Muslims to “occupy every space of this world.”

Also present was Ayman Hammous, executive director of the Muslim American Society (MAS), which has been identified as the affiliate of the Muslim Brotherhood in the United States. Johnson-Harrell shared the stage with Hammous even though just two months earlier, in May of 2019, the Muslim American Society's Philadelphia chapter made news after it was caught after uploading a skit where Muslim children sang about beheading Jews.

Johnson-Harrell responded to the controversy over the video by equating it to Jewish and Christian religious texts, “I wanted to note that all religions have sections of their holy books that they might not be particularly proud of.” She then quoted scripture from the Hebrew bible and Christian New Testament, but nothing from the Koran.

In November 2019, Johnson-Harrell spoke at two more CAIR events, one in Los Angeles and one in Washington, D.C., at its national banquet. In L.A. she was joined by fellow Philadelphian and BDS-supporter Marc Lamont Hill and congratulated him for receiving CAIR's “courage under fire” award. Referring to her successful election, Johnson-Harrell said, in a statement now dripping with irony:

Not only was Johnson-Harrell propelled as a prominent speaker at CAIR's national convention on November 9 in Washington, D.C., but she enthusiastically uploaded a promotional selfie video excited about rabid anti-Semite Linda Sarsour and anti-Israel/anti-Semite Congresswoman Ilhan Omar appearing as a guest speakers. She spoke along with sheik and “motivational speaker” Aderraoot Alkhawaldeh, a frequent speaker on Sharia Law for the Islamic Circle of North America.

Acknowledging her arrest, Movita Johnson-Harrell tweeted, “Allah v Akbar” (God is greater), expressing no regret or sorrow for the people she hurt, but instead positioning herself as a martyr, tweeting, “My life is one of service. If I have to suffer persecution to save one from the grave then God's will, not mine be done.”

Johnson-Harrell's martyrdom complex has been a fixture of her short time in office as well. Her first accusation came on the day she was sworn in when freshman state representative Stephanie Borowicz referred to Jesus and praised our country's support for Israel in her invocation. CAIR Philadelphia chimed in, not only condemning Rep. Bororwicz as Islamophobic, but anti-Semitic as well. During her time on the Islamist speaking tour Johnson-Harrell's allegations against Borowicz would continue to grow with each retelling.

Meanwhile, CAIR Philadelphia, which was so proud of Johnson-Harrell when she was elected the first Muslim woman to the Pennsylvania Legislature, has not uttered a word about her pleading guilty to stealing over $500,000 from those who trusted her, which no doubt included members of the Muslim community.

In its end-of-year “An important message from CAIR,” the Philadelphia chapter issued no criticism or regret for backing a candidate who was improperly vetted, even though her previous bankruptcy was in the public record.

While the Philadelphia chapter of CAIR calls itself a civil rights advocacy organization, it refuses to acknowledge the underprivileged members of the Philadelphia Muslim community who fell victim to its first Muslim woman elected official. While claiming to represent the interests of Muslims and promote civil rights, the group's only real goal is to promote itself and its own influence through putting Islamists into political power in America. So it's unsurprising that Johnson-Harrell's political demise is a setback they'd prefer to ignore.

Leonard Getz, CPA, is the Philadelphia associate of the Counter-Islamist Grid and a freelance writer whose work has appeared in the American Thinker, the Algemeiner, PJMedia, the Clarion, the Daily Wire, Lifestyles Magazine, Nostalgia Magazine, the Philadelphia Inquirer, the Philadelphia Bulletin, the Jewish Exponent, and the Lock Haven Express. He is the author of the book From Broadway to the Bowery.