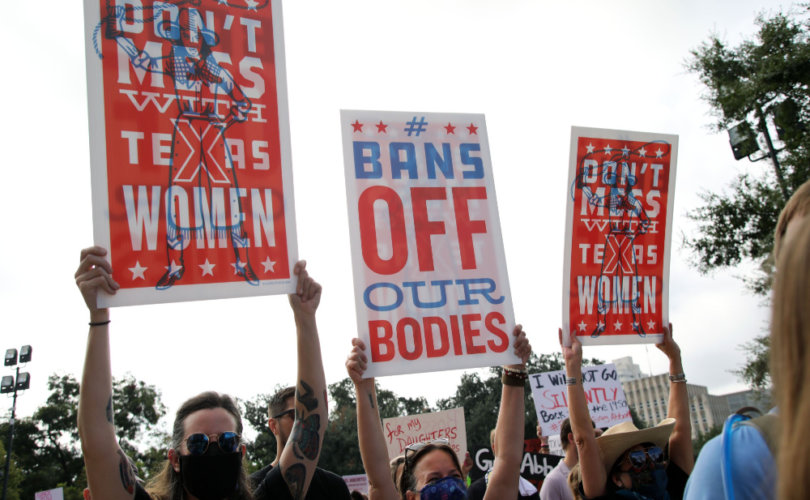 (LifeSiteNews) — Two law professors have lamented the awkward dilemma pro-abortion activists face when they encounter women devastated by miscarriages. Ignoring the reality of fetal life, they say, is callous and counterproductive for pro-abortion advocates’ attempts to win over women grieving the loss of their unborn children.

But rather than resolving that dilemma by affirming an objective view of human life, the two professors – the University of Pittsburgh’s Greer Donley and University of Arkansas’ Jill W. Lens – double down on the contradictions inherent in the left’s worldview.

To win post-Roe political battles, the two suggest pro-abortion advocates advance a “subjective valuation” of preborn children whereby their worth is determined by the mother. “Not only is fetal value subjective, it is also relational,” the two write in November’s edition of the Vanderbilt Law Review. “Neither tort law nor pregnant people view the fetus as entirely separate; the value is in the baby’s relationship with the world, which depends on the pregnant person.”

Donley and Lens are right to criticize the political effectiveness of the left’s current rhetoric. But their solution – which entails at least affirming fetal life – is precisely the type of approach that will amplify contradictions in the progressives’ power-obsessed narrative.

Conservatives may be shocked by Donley’s and Lens’ candor but they’re merely saying out loud what the tacit position of pro-abortion elites has been all along. As they indicate, the current narrative will inevitably fall amid greater scientific knowledge of life in the womb.

Yet and still, that contradiction seems to not be a problem for those advancing so-called “abortion rights.” President Joe Biden, who claims to be personally pro-life, said recently that a “child” is aborted, not a mere fetus.

What’s interesting, though, is that Biden’s comments should have been yet another goof from the gaffe machine. Donley and Lens, however, appear confident that the general public will be receptive to the idea of killing another human being. That is, affirming human life while denying legal personhood that would protect them from abortionists’ medical instruments.

It’s unclear, though, how the professors envision practically instilling a greater emphasis on legal personhood within a movement that prioritizes the humanity of purported victims over even sensible legal considerations. Think, for example, the insistence on mass amnesty for illegal immigrants, the rush to accept refugees despite legitimate security concerns, lax bail policies, and the interest in dismantling law enforcement.

Contemporary progressive rhetoric may, at times, paint oppression as the result of grinding institutional forces or seeming phantoms like institutional whiteness. But in a society that prioritizes autonomy, oppression’s offense primarily rests in its relation to power rather than merely the material or psychological conditions it imposes on victims. Losing abortion access may induce financial losses but what’s more egregious is if those losses are imposed upon women by a more powerful group. This may explain why pro-abortion arguments often frame the debate in terms of a patriarchal or male interest in subordinating women. In this framing, the dominance of purportedly male preferences in abortion policy effectively denies women their status as equal persons before the law.

But abortion isn’t and never has been an intellectually acceptable fix for this purported hierarchy. In fighting the dominance of men, pro-abortion activists ironically replicate the same subjugation and dehumanization they decry. That will only become more apparent as the left, under Donley’s and Lens’ strategy, gets more comfortable with publicly acknowledging scientific facts about the unborn’s humanity.

The two lament the political impact of ultrasound technology, for example, which has made converts out of former Planned Parenthood Director Abby Johnson and NARAL co-founder Bernard Nathanson. As Dr. Tara Sander-Lee put it, modern medicine has literally unveiled the reality of life in the womb.

Slaughter nonetheless is supposed to be more palatable, at least for these two, since legal personhood is a construct that changes according to each individual’s interest in their child. Tort law, they say, has provided an example for allowing different valuations of human life. Whereas murder laws take a more objective view of human life, a tort case may assign value based on a variety of other factors.

With Roe’s end, this debate will be less confined to legal briefs and more decided by plain-speaking about the issue – both in state legislatures and picket lines. Those are arenas where progressives have arguably won because they’re able to capitalize on empathy for “their” victims (same-sex couples, gender-confused kids, a single mother, etc…).

Donleys’ and Lens’ strategy, though, would not only lend that same advantage to pro-lifers. It would reposition women as at least partial oppressors rather than wholly victimized by patriarchal influences. As seen with Live Action’s abortion procedures video campaign, when Americans see the reality of life in the womb, they change their mind about restrictions on the procedure.

Imagine, for example, a Woman’s March protester realizing that she wants to protect her inherent worth by denying that of another human being. At some point, the cognitive dissonance will have to wear on even the most strident of “pussyhat” wearers.

To be clear: Lens and Donley are not merely arguing that personhood depends on location. They’re also saying it changes according to the mother’s highly variable level of attachment (among other factors). In other words, someone with more social and political power could make arbitrary determinations about the value of a less powerful member of their species.