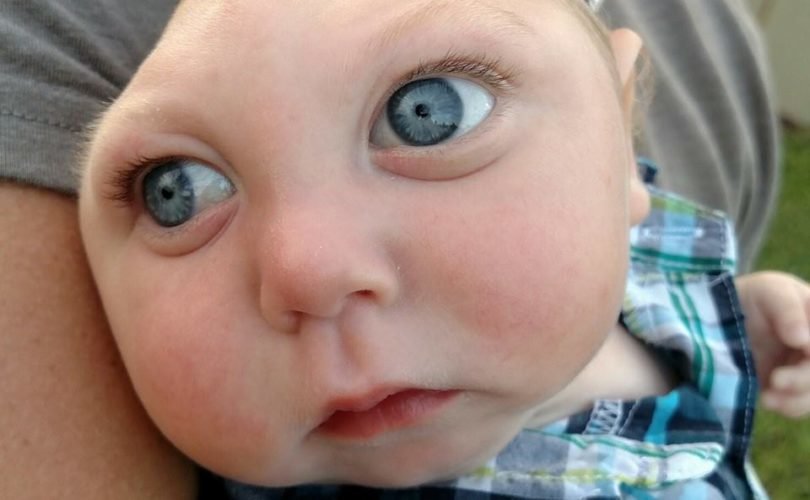 October 8, 2015 (MercatorNet) — Baby photos are always a winner on Facebook, but there is one infant whose pictures are melting the hearts of hundreds of thousands as his story spreads through the social networking site and mainstream media.

On the Jaxon Strong Facebook page, Jaxon Emmett Buell’s big blue eyes look out from his chubby face in a way that conquers the heart before the mind has time to object to the size and shape of his head. The little Florida boy was born with anencephaly, a severe neural tube defect which means that most, if not all of the cerebral cortex and the corresponding part of his skull are missing.

His mom and dad, Brittany and Brandon Buell, discovered there was something seriously wrong with their unborn baby’s development after Brittany’s second ultrasound scan at 17 weeks. Doctors were unsure of the exact diagnosis but the prognosis was dire: Jaxon might not survive, or if he did, only with profound disabilities. As is routine, they offered the couple a termination.

But the Buells believed that their baby was going to make it. Experts assured them the baby wasn’t in pain and that there were no added risks to Brittany’s health. In any case both their natural instincts and their religious faith made them unwilling to “play God” by deciding to end the life of the child they had been given. It “was our job to give him a chance to live,” Brandon later wrote.

And live he does; the little battler is now 13 months old, to the surprise of experts. At first the doctors thought he would die within two weeks, then a couple of months, then two years, Brittany told Fox News. “Now they say they don’t know. Jaxon is writing his own book.”

It’s true that both baby and parents have had a difficult time of it. Brandon admits that the first sight of his son was “a bit startling and sobering.” During the first few months Jaxon was hospitalised multiple times for feeding tube issues and two bouts with a virus.

This past summer, in addition to normal teething troubles and fussiness, he developed serious gastrointestinal issues and seizure-like episodes. Doctors tried more than a dozen drugs and 11 types of formula, but nothing seemed to help. In early August he was admitted to hospital in Orlando, but the doctors there ran out of ideas.

The Buells, however, were not giving up their efforts to improve their son’s quality of life. They decided to throw themselves on the mercy Boston Children’s Hospital, one of the premier facilities of its kind in the US, and simply turned up in the emergency clinic there with Jaxon in August.

At Boston they got the current, more precise diagnosis of his condition (microhydranencephaly), and a new medicine recommended by the doctors there is helping the little boy sleep better. A story on the Boston Globe’s website boosted their media profile and brought increasing support.

Recently Brandon has written: “He’s back to smiling at us, always so happy in the morning after he wakes up and takes turns looking at both Mommy’s and Daddy’s face, seemingly as if he is so excited to start another day.” He says “mama” and “dada”, scoots along the floor, and his mom and dad believe that if he can get through the irritable stage he will have a lot more life ahead of him.

One thing is clear: they love their little boy to bits, and can’t fathom why some people through the social networks have criticised their decision not to abort the child.

“It’s baffling to hear or see other people’s opinions on our baby that have never met him, that somehow know how he thinks, how he acts, how he feels, how much of what he does is voluntary or involuntary, how he is always in pain, and that we are selfish parents for not choosing to have an abortion, and for having a Facebook and a Go Fund Me page for him,” wrote Brandon.

The GoFundMe page was set up by a former colleague of Brandon’s to help the Buells with medical expenses, explained Brandon, as well to allow Brittany to stay home with Jaxon, who does best when he’s cared for by his mom.

“Had there been any suffering in the womb or a danger involved other than Jaxon possibly not being able to live outside the womb because of the concern for his head and brain, then we certainly would have had a different discussion,” continued Brandon.

“Truthfully, I will never understand how choosing to carry Jaxon and give him a chance to survive could ever be considered ‘selfish,’” he added.

The overwhelming response, however, has been positive and warm. Nearly 195,000 people have “liked” the Facebook page Jaxon Strong, and hundreds of families with similar stories and struggles have contacted the Buells. The couple hope that Jaxon’s story will advance medical research and help more families in the future. Brandon writes:

“We believe the medical world will also benefit from Jaxon’s story, from his rare neurological condition, and from his diagnosis, because we are certainly seeing firsthand how much there is still to learn about the human brain. We plan to work with the top infant neurological teams in the country, if not the world, for all of these benefits, and we keep our focus as broad as we possibly can so that Jaxon’s story does not end with Jaxon.”

He continued: “No matter who you are or what you believe in, it’s clear that Jaxon’s tiny footprints will have a lasting impression on this world, and that he has already touched and inspired more lives in one year than most of us ever will in our lifetime.”

As Jaxon’s story continued to spread across the Internet this week it was obvious that there is a lot more encouragement outside hospitals and doctors clinics for parents accepting a disabled baby than inside them.

No doubt doctors think they are sparing the parents (and outside the US, the public health system) a terrible burden when they present them with the abortion “option”, but they don’t take into account the love and strength that wells up in a mother’s or father’s heart in response to an especially vulnerable little human being. To paraphrase the familiar song, “He’s no burden, he’s my baby boy.”

Looking at Jaxon’s pictures also exposes the fallacy of the notion that “you are your brain”, and that, when your brain stops functioning normally, or a large part of it is missing, you are not a person. No-one who contemplates without prejudice the image of that child with his head lying sweetly on his mother’s shoulder could deny that there is a little person there. Let’s stop judging people by their mental and physical constitutions and accept every human being as an equal member of the human family.

One last thing: it is not necessary to be religious in order to see wounded brothers and sisters like that, but as the Buell’s case illustrates, it certainly helps.