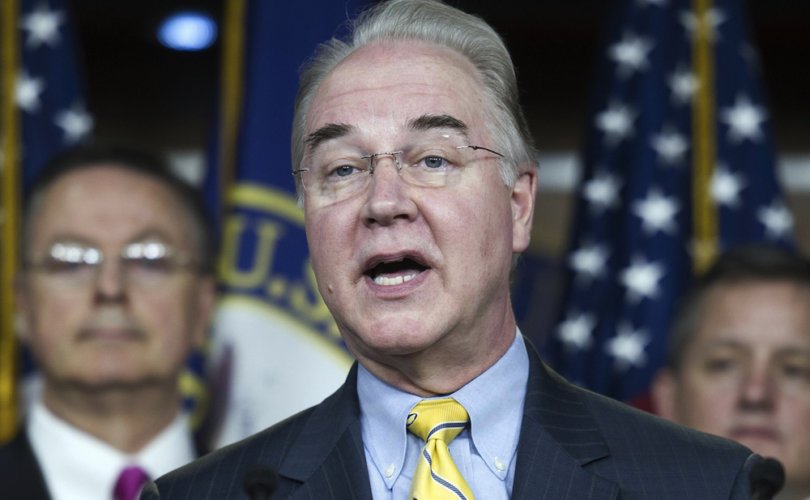 November 30, 2016 (LifeSiteNews) — In late 2014, the California Department of Managed Health Care issued a letter to Blue Cross of California and other HMOs in which it ordered health insurance providers to eliminate all plans that did not cover abortion on demand. As a result of this order, many institutions that objected to paying for abortions were faced with only two options: violate their conscience or self-insure.

It was precisely to avoid this type of pro-abortion coercion by government entities that the US Congress enacted the Weldon Amendment in 2004. The Weldon Amendment, named after physician and former Representative Dave Weldon [R-FL], has been included in each subsequent Health and Human Services (HHS) appropriations act and applies to federal agencies and programs as well as state and local governments receiving federal funds from HHS. The law protects a broad number of entities, including individual physicians and other healthcare professionals, hospitals, provider-sponsored organizations, HMOs, and most importantly, health insurance plans that do not cover abortion.

The problem is that the Weldon Amendment does not include a “private right of action” so that victims of discrimination can directly defend their conscience rights in court. Instead, victims of pro-abortion coercion have only been able to seek protection by petitioning for administrative enforcement by the Department of Health and Human Services Office for Civil Rights. Needless to say, under President Obama, HHS has not been willing to move a finger to enforce the Weldon Amendment. In fact, it took the introduction of a resolution in Congress with 104 co-sponsors in March of this year (H.R. 4828) to get HHS to even respond to complaints that had been ignored since California's egregious violations of the Weldon Amendment in 2014.

When the answer from HHS came in the summer of 2016, it was only to put a stamp of approval on the actions of the California Department of Managed Health Care and to issue an interpretation of the Weldon Amendment that ignored the clear language of the law.

In a letter signed by Jocelyn Samuels, the Director of the Office for Civil Rights of the Department of Health and Human Services, the agency determined that the churches, schools and other institutions that were being coerced to buy abortion insurance by the state of California were not covered by the Weldon Amendment. This interpretation by Director Samuels was not surprising. Ms. Samuels had previously served as vice president of the National Women's Center, a group that advocates for the repeal of the Hyde Amendment and pushes for government funded abortion as a constitutional right.

Contrary to the HHS holding, the language of the Weldon Amendment itself is crystal clear. It defines the term “healthcare entities” specifically to include individual health insurance plans that  do not cover abortion. These plans, as well as “any other kind of health care facility, organization, or plan” are protected by the Amendment from pro-abortion coercion by state and local government.

Nevertheless, in 2014 the California Department of Managed Healthcare decided to flaunt the law and issued letters to numerous HMOs stating that “regardless of existing EOC (Evidence of Coverage) language, effective as of the date of this letter, Blue Cross (and others) must … amend current health plan documents (to include) coverage for 'voluntary' or 'elective' abortions.”

Clearly, demanding that private health plans (purchased by institutions that oppose abortion) cover abortion on demand is precisely the type of violation that the Weldon Amendment was meant to prevent. The year following the passage of the original Weldon Amendment, Rep. Weldon took to the floor of Congress to make clear the intent of his Amendment:

Mr. Speaker, the foundation of American democracy is freedom. In particular, as Americans we are all free to choose or decline issues of conscience, but regarding abortion, choice is losing in a way that may surprise many people.

Such is the case regarding physicians, hospitals and health plans that choose not to perform, pay for or refer for abortions. From Alaska to New Jersey, abortion advocacy groups are forcing healthcare entities to do the very thing they would not if they had the choice. Abortion advocates are using the courts, state and local agencies and laws to mandate that abortions be performed, paid for and referred for. … In July of last year, I offered an amendment during committee consideration of the Labor-HHS appropriation bill to stop this coercion.

Amazingly, the interpretation of HHS ignored the unambiguous meaning of the text and the clear legislative history and instead sided with the pro-abortion state entity. By limiting the applicability of the Weldon Amendment, HHS adopted a tortured interpretation of the Amendment that would further the ideological preference of President Obama and the pro-abortion activists he appointed to administer the department of Health and Human Services.

With the new Trump administration in place, administrators who distorted the law to further a pro-abortion agenda should immediately be replaced and their suspect rulings, such as the one interpreting the Weldon Amendment, revisited immediately.

We hope that incoming HHS Secretary Tom Price, a physician and one of the Congressional architects of the resistance to Obamacare, will take up the mantle of Representative Weldon. Surely, he understands how harmful Obama's regulatory despotism has been to the conscience rights of medical professionals and the patients who rely upon them.

Incoming HHS Secretary Tom Price should work swiftly to dismantle this coercive administrative regime and replace it with a robust structure that gives teeth to the current healthcare conscience protection laws.

Gualberto Garcia Jones was a member of the board of Personhood USA and Personhood Education and is now the National Policy Director for the Personhood Alliance. He has drafted dozens of personhood measures, including the 2010, 2012, and 2014 Personhood Amendments in Colorado, testified in support of North Dakota's Measure 1.