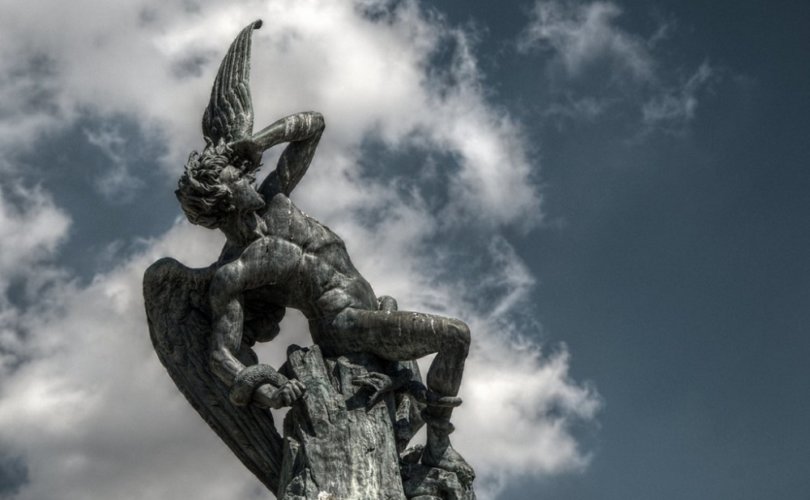 August 29, 2019 (Community in Mission) — Once again it is necessary to reiterate the true, Catholic, and biblical teaching on Satan and demons. Contrary to what Superior General of the Society of Jesus Fr. Arturo Sosa stated in a recent interview, the Church does not teach that Satan is merely a symbol or an idea. He is not the “personification of evil”; he is a person, an individual creature, a fallen angelic being (as are all demons). Scripture uses personal pronouns in referring to Satan and demons (e.g., he, him, they). The Catechism of the Catholic Church affirms that Satan is an existing creature, a fallen angel who is envious of us and is a murderer from the beginning:

This is Church teaching. Let no one be misled by Fr. Sosa's erroneous statements or by the implications that follow from his unfortunate, repeated remarks. Let no one be so unwise as to dismiss the truth that we have an enemy who is very much alive who commands legions of fallen angels. We must accept this as a definitive teaching of the faith and be sober about it.

Any exorcist or anyone who has ever assisted in an exorcism can well affirm Satan's reality and his deep hatred for humanity and all that pertains to God.

As a more extended lesson, I'd like to point out some things I have written before about certain teachings and cautions that come from the Rite of Exorcism.

The Rite of Exorcism presupposes the Catholic teaching that Satan and all demons are persons. They are addressed as persons and commanded to reveal their names, ranks, and other pertinent information. These angelic persons respond, often reluctantly and with fury at first, but later, as their power is broken, with cries and whimpers. The exorcist is clearly addressing an angelic person, a fallen angel who then reacts and responds.

As he is dealing with a being who is both a creature of God and a fallen angelic person, the exorcist must find a balance. Sadly, he must usually inflict pain upon demons in order to drive them out. This is done through the prayers of the Rite of Exorcism and through other things recommended by the rite such as the use of holy water, the use of relics, the touch of a stole, and the use of the Holy Cross.

The exorcist must be careful not to hate demons or harbor unjust anger toward them. If he were to do so, they would have him; he would be drawn into their territory. If they can get him to hate and have vengeful anger, he will be theirs, little better than they save for the possibility that he can still repent.

Hence, the exorcist and any who would pray for deliverance from demons for themselves or others, do well to stay inside the norms of the Church and Scripture. These norms warn and set limits for those who would confront demons, lest they stray by pride or anger.

What are some of these norms? Here are just a few, but they are properly cautionary to be sure:

Scripture also attests to the need to refrain from reviling demons:

For even Michael the archangel, when he disputed with the devil and argued about the body of Moses, did not dare pronounce against him a reviling judgment, but said, “The Lord rebuke you!” (Jude 1:9)

Further, hate and ridicule of any person (angelic or human) whom God has created is an ungodly attitude. Scripture says,

For you O Lord love all things that are and loathe nothing that you have made; for you would not fashion what you hate (Wisdom 11:24).

Therefore, anyone who confronts demons or suffers their oppression is warned that hatred, unjust anger, reviling, and ridiculing, is no way to fight them, for if we do so we become like them.

That said, exorcists and priests must often use strong language approved by the minor and major prayers of exorcism, most of which are drawn from Scripture or Sacred Tradition.

Consider, for example, the following rebuke of Satan from Scripture:

How are you fallen from heaven, O Lucifer, son of the morning! How are you cut down to the ground, who did weaken the nations! For you have said in your heart, “I will ascend into heaven, I will exalt my throne above the stars of God: I will sit also upon the mount of the congregation, in the farthest sides of the north: I will ascend above the heights of the clouds; I will be like the most High.” Yet you shall be brought down to Sheol, to the depths of the lake of fire (Is 14:12–15).

These verses speak truth. They do not revile; they state what happened and point to Lucifer's prideful fall.

The Rite of Exorcism has collected many descriptions from Scripture and Tradition. They are not intended to ridicule or revile but rather to remind Satan of who and what he has chosen to become. They remind him of his pride, his destruction by God's justice, his ultimate fate, and the many ways he seeks to harm us. Consider, then, some of the “titles” and descriptions of Satan drawn from both the old and new rites of exorcism:

(I have compiled a pdf containing a list of these in both Latin and English here: Titles of Satan from the Rite of Exorcism.)

Thus, whether driving out Satan in a major exorcism or seeking to expel his oppression in a minor exorcism, all are cautioned not to stray from the understandings and descriptions of Satan that the Church provides in Scripture and Sacred Tradition. Again, the reason for this is that Satan seeks to draw us into his world of hatred and revilement. Do not go there in your thoughts and surely not in your heart.

It may be hard to accept, but God does not hate Satan. God does not hate even the worst of sinners. Justice requires God to recognize the final disposition of a person (angelic or human). Some are justly permitted to live apart from God's kingdom in a hellacious parallel universe; that is their permanent choice. But God does not hate fallen angels or fallen humans. God is love, and love does not hate — and neither should we.

We ought to be sober about what sin has done to demons, fallen angels who were once glorious. Now, through the disfigurement of sin, they are in darkness and are horribly contrary to the glory for which they were made. They are to be pitied and kept at a distance. They will not change because angels choose once and for all. Their lies are to be resisted. Though they can still appear as lightsome, it is only for a time, and then their terrifying state of horror and darkness roars forth.

Remember, too, what the Catechism says about Satan's power and why he permits some limited influence by demons:

The power of Satan is, nonetheless, not infinite. He is only a creature, powerful from the fact that he is pure spirit, but still a creature. He cannot prevent the building up of God's reign. Although Satan may act in the world out of hatred for God and his kingdom in Christ Jesus, and although his action may cause grave injuries — of a spiritual nature and, indirectly, even of a physical nature — to each man and to society, the action is permitted by divine providence which with strength and gentleness guides human and cosmic history. It is a great mystery that providence should permit diabolical activity, but “we know that in everything God works for good with those who love him” (CCC #395).

Do not be deceived. Satan is real and we must resist him, strong in our faith. However, do not be so terrified that you forget that God, His angels, and the grace He bestows on us are more powerful and that God limits what demons can do. Trust God; call to Him; frequently recite the 91st Psalm. Be sober and watchful and stay distant from the once-glorious fallen angels we rightly call demons.