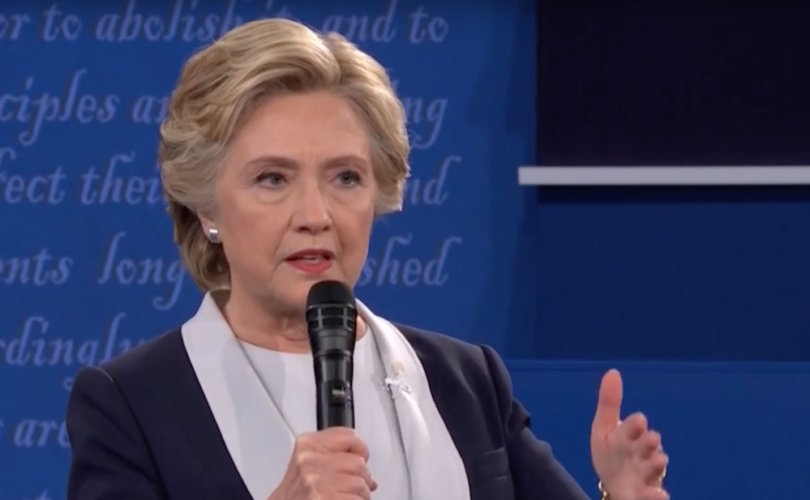 ST. LOUIS, October 10, 2016 (LifeSiteNews)—During the same debate in which she promised to nominate pro-abortion Supreme Court justices who will “stick with Roe v. Wade,” Hillary Clinton bragged about how she has “tried my entire life to do what I can to support children and families,” and that “hundreds of thousands of kids now have a chance to be adopted because I worked to change our adoption and foster care system.”

Throughout her political career, Clinton has advocated for abortion on demand. She has said her presidential campaign “belongs” to abortionists and Planned Parenthood, the country’s largest abortion provider. Planned Parenthood commits 160 abortions for every one child referred for adoption. Clinton supports repealing the Hyde Amendment, which has saved two million lives by prohibiting taxpayer money from funding Medicaid abortions, according to the Charlotte Lozier Institute.

Clinton also asserted, “We are a country founded on religious freedom and liberty” when attacking Donald Trump’s proposals to severely limit Muslim immigration to the United States.

“How do we do what he [Trump] has advocated without causing great distress within our own country?” asked Clinton. “Are we going to have religious tests when people fly into our country? And how do we expect to be able to implement those?”

Clinton’s acknowledgement of the centrality of religious freedom to America contrasts a famous statement of hers that “religious beliefs” against abortion “have to be changed.” She also supports the HHS mandate forcing religious employers to cooperate with the provision of contraception and abortifacient drugs through their employee health plans.

However, Clinton’s rhetoric during the debate didn’t only focus on her work helping “families and children.”

“When I was Secretary of State, I went around the world advocating for our country but also advocating for women’s rights—to make sure that women had a decent chance to have a better life,” she said.

As long as they make it out of the womb alive, that is.