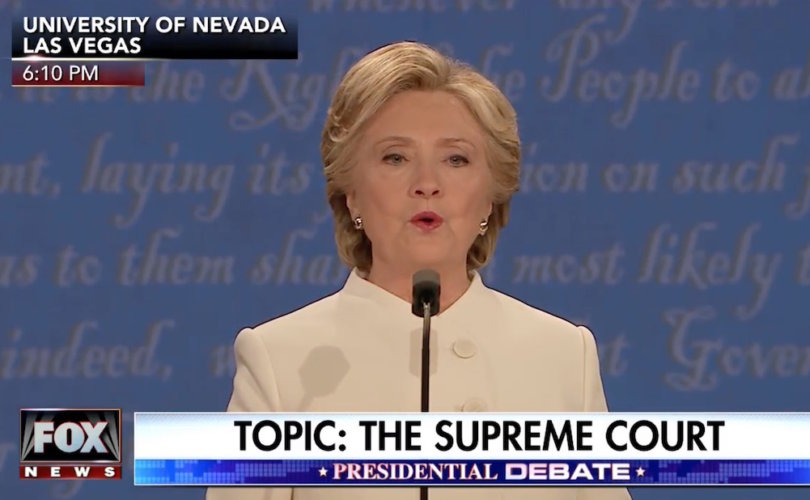 If abortion is a morally neutral medical procedure, why would it cause women so much heartbreak and pain, as Clinton put it?

The language she used defending abortion last night raised some fundamental questions that get to the heart of this debate: what is the pre-born fetus in the womb? If it’s human, then it’s wrong to kill it because it’s wrong to kill other humans (at least, most people believe that, although hardcore abortion advocates say we should be able to kill a variety of “unwanted” people, born or not yet born).

Roe v. Wade very clearly sets out that there can be regulations on abortion so long as the life and the health of the mother are taken into account. And when I voted as a senator, I did not think that that was the case. The kinds of cases that fall at the end of pregnancy are often the most heartbreaking, painful decisions for families to make. I have met with women who toward the end of their pregnancy, get the worst news one could get, that their health is in jeopardy if they continue to carry to term or that something terrible has happened or just been discovered about the pregnancy. I do not think the United States government should be stepping in and making those most personal of decisions. So, you can regulate if you are doing so with the life and the health of the mother taken into account.

How can a pregnant woman be a mother if the entity in her womb is anything but a human child? Sure, some might say Clinton was referring to women who have born children, but that’s certainly not all women seeking abortions.

If abortion is morally acceptable throughout pregnancy, then why is it the “worst news one could get” that a doctor is recommending a late-term abortion? Why is abortion so “difficult,” as she said during another part of the debate?

At another point, Clinton trashed laws protecting the health and safety of women. She said:

The “stringent regulations” to which she was referring are laws that hold abortion centers to very basic health and safety standards. In some states, abortion facilities are less regulated than nail salons and veterinary clinics.

“Stringent regulations” and a pro-woman health department might have prevented Kermit Gosnell from operating his “house of horrors” abortion center in Philadelphia for so many years. They might have helped prevent shoddy abortion centers from killing not only babies but also their moms.

When Clinton says she will “defend Planned Parenthood,” does she mean she will stand by their salad-munching and wine-sipping abortionist who explicitly laid out how she alters abortions to obtain fetal parts to sell?

I agree with Clinton that “the Supreme Court should represent all of us” and be “standing up on behalf of our rights as Americans.” I just wish that she counted the youngest members of the human family.