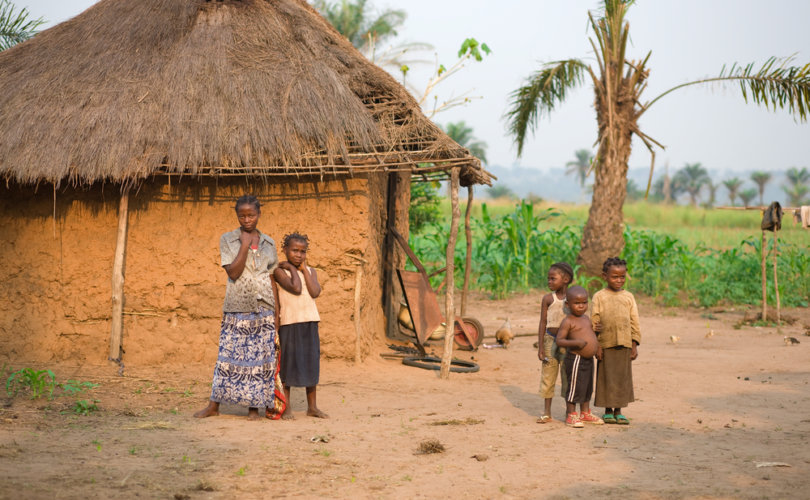 Openness to life is at the center of true development. When a society moves towards the denial or suppression of life, it ends up no longer finding the necessary motivation and energy to strive for man’s true good. If personal and social sensitivity towards the acceptance of a new life is lost, then other forms of acceptance that are valuable for society also wither away.  (Caritas In Veritate, n. 28)

October 26, 2016 (HLI) — In this and in many other passages, in perfect harmony with his predecessors and with Pope Francis, Pope Benedict XVI underlines that the respect for life cannot in any way be detached from what the Catholic Church calls authentic, integral human development. The Church continues to teach this essential truth because we know that the poor in various parts of the world have been targeted for decades with population control – contraception, sterilization, and abortion. In economically developed countries, there is a radical anti-birth mentality, which is exported to other nations as if it were a form of cultural, economic, and social progress. In addition, many private institutions, NGOs, and governments consider development and population control as symbiotic – linking legitimate development aid to the imposition of birth/population control. Their verbal engineers call this “sustainable development.”

HLI has confronted this situation since our inception and, in collaboration with the local Catholic Church and international pro-life leaders, continues to fight this radical mentality that attacks the inalienable dignity of the human person. What makes things more difficult and scandalous is when we learn of anti-life agencies working with the support of the Catholic Church, directly or indirectly.

Since I became president of HLI in 2011, we have attempted to work with leaders at Catholic Relief Services (CRS) and the bishops on its board of directors to resolve the situation and strengthen CRS’s mission and work. HLI has respectfully sought the path of subsidiarity in this conversation, attempting to avoid further scandal to the faithful who want assurance that CRS is acting in accord with Church teaching. Sadly, our attempts have produced no fruit. Instead, we have often been marginalized and shut out of the conversation by those who are deeply invested in the secular development model or who believe that such problems could not occur.

It saddens me that the Lepanto Institute has again found a clear case of CRS disregarding its moral obligation to ensure that those receiving funding are in compliance with Church teaching. This public disagreement was not HLI’s first choice, but given our mission, and the very high stakes both for the Church and for those who are harmed by these programs, we cannot in good conscience be silent.

With the latest Lepanto Institute report, faithful Catholics also have a responsibility. You didn’t ask for this responsibility, and you may want this scandal to simply go away. But it will not go away as long as the status quo remains. Those who are concerned but don’t know what to think are put in the unfortunate position of having to do some research and not simply resort to ideological “camps” who simply take their own side’s word as fact.

To put our cards on the table: we at HLI are convinced that CRS has been caught several times implementing projects that are not only utterly incompatible with Catholic social and moral doctrine, but are also destructive for those supposedly “helped.” Challenged on these reports, CRS routinely misleads the bishops and its supporters, issuing denials that assume great ignorance on the part of the reader as to how these complicated projects occur. Further, when such challenges are raised, CRS attacks the messenger’s motives and credibility, dragging good bishops into the fray with statements that are untrue.

This is our position, but again, we do not ask you to take a side in this scandal (sadly, yes, there are now sides) based merely on a short position statement. In order to understand, more work must be done.

Many say that to understand what’s going on one must “follow the money.” Surely the funding is relevant, but that’s different than proving the case, so one should also not draw a conclusion on this alone. Still, it is worth asking: Who has more at stake in this battle?

CRS receives hundreds of millions of dollars annually from the federal government, and tens of millions more annually from massive NGOs who not only disagree with the Church on these matters, but also together invest billions annually opposing the Church. CRS receives over 80% of its huge annual budget from a government and organizations that believe population control is the primary development priority today, and these organizations don’t hide this—they don’t think they have to. CRS then receives about 3% of its annual income from the Rice Bowl and other pew collections from Catholics, though Catholics certainly give more via other fundraising channels.

By way of contrast, the party exposing the government documents showing CRS’s participating in this destructive program, the Lepanto Institute, made less than $100,000 last year. Population Research Institute has also initiated previous investigations and, like HLI, has publicly expressed its concern about CRS when private outreach has failed. To our knowledge PRI’s annual budget is less than half that of the lone project that is the subject of the latest controversy. Same with HLI, as much as I wish it were different!

It is our mission at HLI to preach the Gospel of Life around the world, focusing on education, outreach and advocacy. This is why we are reluctantly involved in this debate: Most of the over 80 nations in which we and our partners are currently engaged are in the developing world, and suffer greatly from the imposition of population control programs disguised as legitimate development and health concerns. That’s how the multi-billion dollar aid and development industry works. It’s also why the NGOs who comprise it have such enormous budgets and so little to show for their decades of work: If the intention was to see these nations develop rather than remain dependent on wealthier nations with their own designs, then those responsible for decades of fruitless efforts would have been replaced long ago.

Sadly, though we believe most in the aid industry do indeed have good intentions, the point of the industry is not to succeed and thus put itself out of business, but rather to keep itself in business by perpetuating the corruption of governments that are unaccountable to their own people, but very responsive to massively funded Western development efforts. It’s economics 101: when your revenue is not tied to the productivity and genuine progress of your own people, but rather is tied to complying with the directives of wealthy parties who have their own priorities, you will never see authentic, integral development.

To the most recent case, then: Documents published by the federal government show CRS as an implementing partner in a six million dollar project in the Democratic Republic of Congo; a project whose stated goal was to improve maternal and child health. Not one single person who knows how these projects work would deny that they entail birth/population control as a matter of course. This one was no different — requiring detailed quarterly reports of the receipt and storage of contraception (including abortifacient methods), as well as measurement of the program’s effectiveness in getting more women to use various methods of artificial birth control. The project’s reports show Catholic Relief Services receiving, storing, and helping to distribute 2.25 million units of contraceptives, then reporting the program’s “success” in getting almost 850,000 people to use the methods in the region for which CRS had responsibility.

No one disputes these facts.

CRS has, however, issued a response asking bishops to ignore the Lepanto Institute’s report and direct pastors to support CRS. In its statement of “refutation,” CRS ironically does not even attempt to refute a single charge. They simply, categorically, deny that they had anything to do with any element that was against Church teaching, providing as proof a letter from the sponsoring agency’s director, who says that CRS was clear on this point.

I’m sure I’m not the only one who finds this an odd way to “refute” the carefully vetted reports from the same partner, in which they claimed the opposite.

The problem, CRS says, is that its sponsoring partner forgot that CRS insisted that it wouldn’t promote anything against Church teaching. Somehow the reporting partner mistakenly got the idea — after receiving CRS’s own quarterly reports — that CRS was itself storing, distributing, and measuring the acceptance of contraception among the targeted population in the region for which CRS was responsible, according to the documents.

Tellingly, CRS does not acknowledge in its response the video showing its project director (a medical doctor shown wearing a polo shirt with both USAID and CRS logos) describing the full range of the project’s concerns and its success in getting almost 850,000 people to use new methods of “family planning.” While this may be dealt with in a second response from CRS, the current strategy seems to include the hope that the bishops and you will not actually read the Lepanto Institute report or look at the government documents and video.

Again, I want to avoid questioning motives here and ask that you read both the Lepanto Institute report and CRS’s letter of response. If you are going to express an opinion on the matter, it should be an informed one.

To be perfectly honest, I find CRS’s explanations of its partner’s “errors” insulting (an explanation they rely on quite a bit in their explanations of previous problems), including the fact that they don’t address the majority of documented concerns before turning to attack the motives of CRS critics.

I also don’t want to participate in bashing the bishops on this. I think most would agree that a crucial element of accountability is missing when the only means of verifying claims of wrongdoing is through the agency accused, but I understand the desire to trust and how limited resources can inhibit such accountability. When this does not happen, the faithful who see and understand the problem will fill the gap, out of love for the Church, and they do not deserve to have their characters and motives maligned. This is a further injustice that requires immediate remedy.

As a confessor, I have been blessed to share the Lord’s mercy with penitents who, caught in a situation of their own choosing, hit bottom and seek reconciliation. Our Lord’s mercy is bigger than any problem we’ve gotten ourselves into, and we avail ourselves of His mercy when we turn back to Him in truth, ask for forgiveness, and firmly resolve to amend our lives. Returning to truth can be incredibly painful, but it is a necessary step for healing to begin. Without this honest and crucial step, problems fester, putting souls at risk.

The Church, led by her faithful shepherds, certainly has a role in evangelizing and working for authentic, integral human development. We sincerely want to help them resolve this scandal that is being perpetrated by an organization that is acting in their name. We at HLI remain ready to consult with any bishops who do not understand how the development industry operates and are looking for ways to engage in this essential work without these problems continuing to recur. Let us go forward together in both charity and truth and end this ongoing scandal.