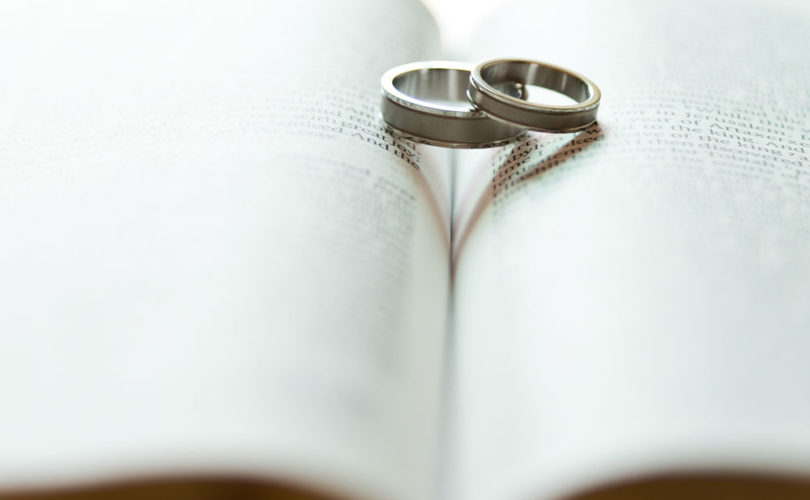 In recent years, homosexuality has frequently been in the news. An increasingly nationwide effort to make homosexual acts something to celebrate has gained great ground and sowed serious confusion even among those who describe themselves as Christian and Catholic. Hence, it is necessary once again to instruct on this matter and to reassert what Scripture plainly teaches and why the Church cannot affirm what the world demands we affirm.

An essential fact is that the Scriptures are very clear in unambiguously, uncompromisingly declaring homosexual acts as a serious sin and as disordered. “Disordered” here means that they are acts that are not ordered to their proper end or purpose. Sexual acts are, by their very nature, ordered to procreation and to the bonding of the mother and father who will raise the children conceived by their sexual intimacy. These ends or purposes have been intrinsically joined by God, and we are not to separate what God has joined.  In the Old Testament, Scripture describes the sinful and disordered quality of homosexual acts by the use of the word “abomination,” and in the New Testament, St. Paul calls homosexual acts “paraphysin” (contrary to nature).

Attempts by some to reinterpret Scripture to mean something else are fanciful, at best, and use theories that require twisted logic and questionable historical views in an attempt to set aside the very plain meaning of the texts.

Likewise in the wider culture, among those who do not accept Scripture, there has been an increasingly insistent refusal to acknowledge what the design of the human body plainly discloses: that the man is for the woman, and the woman is for the man. The man is not for the man, nor the woman for the woman. This is plainly set forth in the design of our bodies. The outright refusal to see what is plainly visible and literally built into our bodies is not only a sign of intellectual stubbornness and darkness (cf Rom 1:18, 21), but it also leads to significant issues with health, even to deadly diseases.

And we who believe in the definitive nature of scriptural teaching on all aspects of human sexuality are not merely considered out-of-date by many in our culture, but are being increasingly pressured to affirm what we cannot reasonably affirm. Cardinal Francis George recently expressed the current situation in this way:

In recent years, society has brought social and legislative approval to all types of sexual relationships that used to be considered “sinful.” Since the biblical vision of what it means to be human tells us that not every friendship or love can be expressed in sexual relations, the church’s teaching on these issues is now evidence of intolerance for what the civil law upholds and even imposes. What was once a request to live and let live has now become a demand for approval. The “ruling class,” those who shape public opinion in politics, in education, in communications, in entertainment, is using the civil law to impose its own form of morality on everyone. We are told that, even in marriage itself, there is no difference between men and women, although nature and our very bodies clearly evidence that men and women are not interchangeable at will in forming a family. Nevertheless, those who do not conform to the official religion, we are warned, place their citizenship in danger [1].

Whatever pressures many may wish to place on the Church to conform, however they may wish to “shame” us into compliance by labeling us with adjectives such as bigoted, homophobic, or intolerant, we cannot comply with their demands. We must remain faithful to scriptural teaching, to our commitment to natural law, and to Sacred Tradition. We simply cannot affirm things such as fornication and homosexual acts and reject the revelation of the body as it comes from God.

What some call intolerance or “hatred” is, for us who believe, rather, a principled stance wherein we see ourselves as unable to overrule the clear and unambiguous teaching of Holy Scripture. And this teaching exists at every stage of revelation, from the opening pages right through to the final books of Sacred Writ. The Church has no power to override what God has said; we cannot cross out sentences or tear pages from the Scripture. Neither can we simply reverse Sacred Tradition or pretend that the human body, as God has designed it, does not manifest what it clearly does.

The Catechism of the Catholic Church announces this principled stance with eloquence and with an understanding of the difficulties encountered by those with same-sex attraction:

The number of men and women who have deep-seated homosexual tendencies is not negligible. This inclination, which is objectively disordered, constitutes for most of them a trial. They must be accepted with respect, compassion, and sensitivity. Every sign of unjust discrimination in their regard should be avoided. These persons are called to fulfill God’s will in their lives and, if they are Christians, to unite to the sacrifice of the Lord’s Cross the difficulties they may encounter from their condition.

Homosexual persons are called to chastity. By the virtues of self-mastery that teach them inner freedom, at times by the support of disinterested friendship, by prayer and sacramental grace, they can and should gradually and resolutely approach Christian perfection (CCC 2357-2359).

We can speak no other way. We do not detest those of same sex-attraction, but we as a Church owe them the same truth we have always proclaimed as coming from God, and out of respect we must hold them to the same standards of chastity by which all must live.

There can be no sexual intercourse for any who are not in a valid heterosexual marriage. We cannot give approval for it; we do not have the power to do this, no matter how insistent, forceful, or even punitive the demands that we do so become. This will not change because it cannot change.

Sadly those of unalterable same-sex attraction have no recourse to marriage. But all of us bear burdens of one sort or another, and not everyone is able to partake in everything life offers. For the sake of holiness, heroic witness is necessary, and many of those with same-sex attraction do live celibately and give admirable witness to the power of grace.

God must have the final word in this. And so I present to you here some selections from Sacred Scripture that clearly teach against homosexual acts. The witness of Scripture in this regard is very consistent across all the ages of biblical Revelation. From the opening pages of Holy Writ to the final books, homosexual acts, along with fornication and adultery, are unambiguously forbidden and described as gravely sinful. In addition, homosexual acts, because they are contrary to nature and to the revelation of the body and the nature of the sexual act, are often described as acts of depravity or as an “abomination.” Some consider such words unpleasant or hurtful. I understand, but they are the words that Scripture uses. Here is a sample of Scriptural teaching against homosexual acts:

And this is the testimony of Sacred Scripture. To these could be added other passages, along with a long list of quotes from the Fathers and from Sacred Tradition, with Councils and other teaching documents from the earliest days of the Church until today.

To those who like to object that Jesus himself never spoke of homosexual acts, I would give these three responses:

The teaching of the Church regarding the sinfulness of homosexual acts, fornication, and adultery cannot change, attested to as they are in Sacred Scripture and Tradition. The Church can only offer the truth to all the faithful and to all in this world, along with her promise of God’s mercy to those who seek repentance and who now desire to live chastely. To those who refuse, she continues to give warning and to pray both for conversion and for rescue from the deceptions of the world and the evil one.

Cardinal George summarized well both the reason we cannot approve homosexual acts and the solution of celibacy for those of same-sex attraction: The biblical vision of what it means to be human tells us that not every friendship or love can be expressed in sexual relations [2]. Clear and concise. Thank you, Cardinal George.

For more information and support for those who have same-sex attraction, see here: Courage

Reprinted with permission from the Archdiocese of Washington.