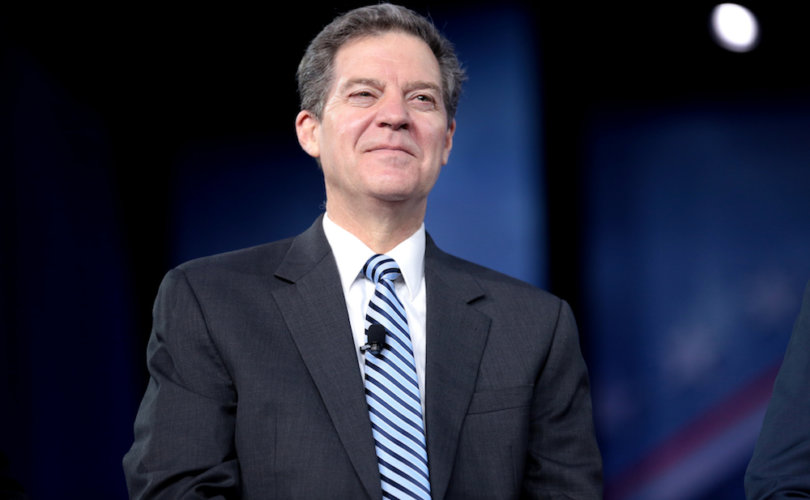 “HRC is deeply disappointed by Trump’s nomination of this anti-LGBTQ politician,” the organization said in a press release, adding that nomination of Brownback is “a weapon to advance discrimination.”

Brownback is a bold, pro-life and pro-marriage conservative who has defended the right of Christians and others of faith to live out their beliefs in the public square.

That’s just it: the Human Rights Campaign doesn’t want Christians or anyone of faith to be able to live out their beliefs in the public square.

That’s what the HRC is afraid of. Sincerely held religious beliefs are what threaten their global agenda of universal compliance.

In a blatant example of doublespeak, homosexuals are bullying Christians and others of faith by accusing them of being bullies.

They call faithfulness to the teachings of Christ “discrimination.” The last thing they want is for religious citizens to actually live by a moral code in the workplace.

Brownback, on the other hand, has worked to ensure clergy are not forced to violate their sincere beliefs. As Kansas governor, he stopped state persecution of pastors who teach, as Jesus did, that the activities of Sodom and Gomorrah are harmful.

But the Human Rights Campaign says Christian ministers should be forced to not only publicly approve of homosexuality but endorse it officially with God’s blessing.

Gov. Brownback also defended the rights of Christian and other religious student groups to have membership standards consistent with the group’s religious affiliation.

Of course, to the Human Rights Campaign, it is “hateful discrimination” to require members of Christian groups to believe in Christ and the teachings of His Body.

The Human Rights Campaign considers biological reality and genetic science to be “deadly” prejudice and an attack on one’s true “identity,” which is oh-so-solidly and rationally based on feelings and one’s current whim.

In the most grievous assault on the gay agenda’s most sacred cow, Brownback as a congressman in 1996 voted for the Defense of Marriage Act, which defined marriage as a union of one man and one woman.

Brownback holds the personal belief that sodomy is immoral and against both Christian teaching and natural law. The Human Rights Campaign absolutely cannot allow him to believe that. They say the justice system must severely punish such beliefs.

It’s as if the Human Rights Campaign doesn’t defend sodomy as a behavior, which people of good will may disagree on the merits of, but as a religion.

Sodomy and other homosexual behaviors constitute the faith of practitioners. And they are using the sword of government to force conversions.

The extremism of the HRC knows no bounds. In 2015, the HRC lashed out against Brownback for talking to the World Congress of Families, a cautiously non-political, non-confrontive group of pro-family supporters.

The rabid HRC falsely accused the carefully benign World Congress of “spreading anti-LGBT rhetoric and promoting laws and policies that criminalize LGBT people and the speech of those who support them.”

So it’s no surprise that the HRC is pulling out all the stops to try to block Brownback’s appointment as a monitor of how religious people are treated around the world.

The fact is, Brownback is the perfect ambassador for religious freedom precisely because he does not kowtow to gay agenda bullying. His appointment to lead the Office of International Religious Freedom under the State Department is to defend the rights of religious people to live their faith, even when their sincerely held beliefs clash with prevailing political correctness.

Homosexual lobbyists, on the other hand, want to take away the freedoms of religious people everywhere by forcing not only acceptance of abhorrent and unnatural practices but their moral equivalency with normal behaviors.

In other words, homosexual activists don’t just want approval of sodomy — that’s enough of a civil rights violation to qualify as an infringement against First Amendment religious liberty — they want tax-funded, government-enforced promotion of sodomy as an act of love.

Simply put, that’s a lie. No Christian can go along with that.

Sodomy is not an expression of love, and the society that condones it harms all its citizens.

And that’s why religious freedom and the gay agenda can never peacefully coexist.