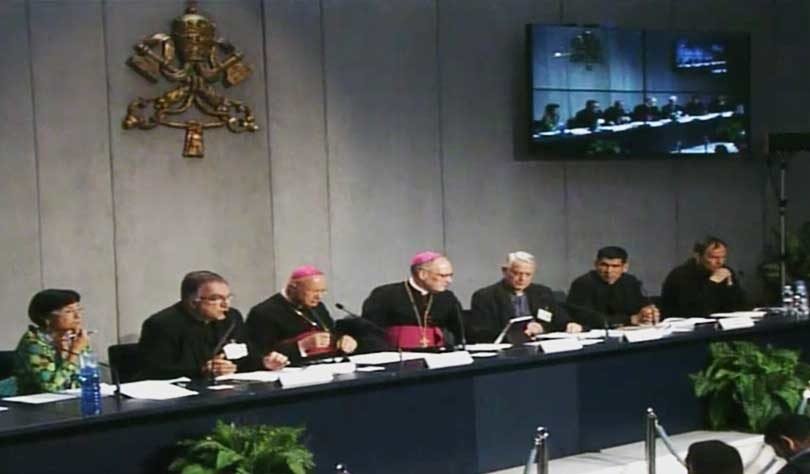 6 October, 2015 (LifeSiteNews.com) – The Ordinary Synod of the Bishops on the Family opened today to address the theme of “The vocation and mission of the family in the Church and the modern world.”

The world’s media will be watching the bishops very closely, expecting them to ratify “changes” to the Church’s teaching on divorced Catholics and hoping for “changes” to the teaching on homosexuality. Journalists conveniently forget, what most of them know, that the core of Church teaching does not change. However, some of the bishops want to discuss precisely what this “core” really is. And that is unsettling.

The issue of homosexuality was raised by Pope Francis himself when he declared early in his papacy, ““If someone is gay and he searches for the Lord and has good will, who am I to judge?,” deliberately using the English word, “gay.”

This remark released an avalanche of comment both from within the Church and out that has continued unabated since it was made July 29, 2013. And to ensure this issue is brought before the synod, Monsignor Krzystof Charamsa, a member of the Congregation of the Doctrine of the Faith since 2003, “came out” by declaring to an Italian newspaper that he was an active homosexual and living with a “partner.”

Monsignor Charamsa explained his reason for giving the interview:

“The timing is not intended to pressure anyone, but maybe a good pressure, in fact a Christian participation, a Christian voice that wants to bring to the synod the response of the homosexual believers to the questioning of Pope Francis.”

Within 24 hours, Monsignor Charamsa was fired from his Vatican post and told by his Polish ordinary that he may well be stripped of his priestly faculties.

It’s important to remember that when the US bishops released their 2004 report on the priest’s pedophile crisis, the report itself revealed it was not pedophilia that was the problem but homosexual priests having sexual contact with post-pubescent boys and teenagers.

Though 90% of the 400 victims listed in the report were post-pubescent, both the bishops and the media ignored the significance of this finding.

When the report was released at the National Press Club, I asked then USCCB president, Bishop Wilton Gregory, why the ramifications of this statistic were not highlighted in the report. The bishop acknowledged the statistic and then asked for another question.

Bishop Gregory’s determination to look away from the problem is not unique — it appears most of the leadership and laity in the Church have wanted to ignore it as well. Why? Because it would force them to ask, just what percentage of Catholic clergy are homosexual? And, how many of those homosexual priests are active? Most importantly, they would be led to ask whether or not either answer makes any difference to them.

Some years ago I surveyed all the available data on the percentage of homosexuals in the priesthood. When I published my findings and reported on them at a meeting of DC conservatives, I was castigated in a way that totally surprised me. Even my friends at the meeting told me I was out of line, in spite of the fact that I done the research. I will not repeat my findings here, rather I will only state the obvious: The percentage of homosexual priests in the Catholic Church is substantial, so substantial that the drama now underway at the Vatican synod was inevitable.

The July, 2013 comment of Pope Francis pricked a balloon that was ready to burst, and now we are watching as the air which came out slowly at first is forming a wind sweeping through the Church.

Here is what most Catholics know about the Church’s teaching on homosexuality:

(For #5 and #6 see “Instruction Concerning the Criteria for the Discernment of Vocations with regard to Persons with Homosexual Tendencies in view of their Admission to the Seminary and to Holy Orders,” a document published in November 2005 by the Congregation for Catholic Education.)

Since the Church’s policy toward the ordination of homosexual men is an “Instruction,” it is subject to change, which I am sure is on the mind those bishops hoping for “changes,” led by Cardinal Kasper, at the synod. However, the Church cannot, and will not, change its teachings on #1-4, a fact which I am confident Pope Francis will confirm at the synod.

It’s important to notice the prudential nature of the Church’s instruction regarding the ordination of homosexuals. The matter is not presented as black and white, the Church recognizes that the individual circumstances of each man should be respected, and any decisions regarding suitability for ministry should be based upon the individual, not caricatures of homosexual lifestyles.

I’m sure I am not the only Catholic who knows holy priests who have received the grace of chastity and have served the Church both generously and sacrificially. Thus, I would oppose any attempt to bar all men with homosexual tendencies from the priesthood. This would not only deny the heroism of countless priests but also the grace of God available to all of us to govern sinful desire.

But it’s clear, at least to me, that Cardinal Kasper and his co-conspirators are pressing for changes to the unchangeable, namely, the nature of homosexual desire, the moral state of homosexual acts, and, finally, the licitness of homosexual unions.

I doubt if Pope Francis realized his common sense call to charity and compassion towards homosexuals would bring him to face to face with his bishops over the fundament of Church teaching. I, for one, believe the Pope will do exactly what his role as Vicar of Christ calls for — to protect and promulgate the “sacred deposit” of Church teaching.

This article wa originally published on The Christian Review and is re-published with permission of the author.

Deal W. Hudson, Ph.D., publisher & editor of The Christian Review, is president of the Morley Institute for Church and Culture and formerly publisher & editor of Crisis Magazine; Dr. Hudson's latest book is “Onward Christian Soldiers: The Growing Political Power of Catholics and Evangelicals in the United States (Simon and Schuster, 2010).