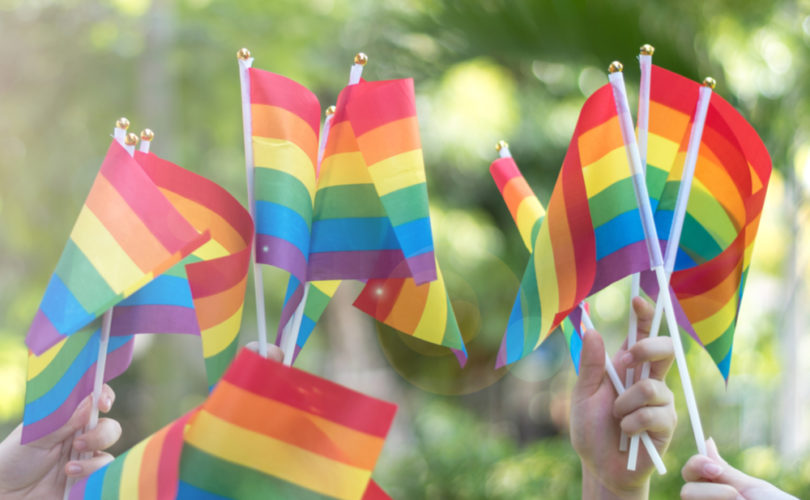 (Crisis Magazine) – In recent days, out-homosexual Tim Miller wrote a piece at the increasingly odd website known as The Bulwark. Miller was writing about the ongoing Sussmann trial where special prosecutor John Durham is making the case that the Hillary Clinton campaign played a direct role in various hoaxes that enveloped our country and the presidency of Donald J. Trump.

Without getting too deep in the weeds, former Clinton adviser Robby Mook testified that Hillary approved the spreading of various lies about a computer connection between the Trump campaign and something called the Alfa Bank in Moscow.

This was misinformation peddled by the Clinton campaign to the FBI that turned into FBI surveillance of Hillary’s political opponent. Miller wrote that Mook’s testimony “has the Trump crowd rubbing their nipples.”

What? Rubbing their nipples? Understand that Miller was a top aide to Jeb Bush during the 2016 campaign. He also worked for John McCain. And he also had a rather high position at the Republican National Committee. Is it any wonder that there seems to be a homosexual ascendancy in certain quarters of the “conservative” movement?

But Miller isn’t the only porny homosexual given pride of place in certain conservative quarters.

Douglas Murray seems to be a current darling in many conservative confabs. He was featured on a panel last fall at the National Conservatism Conference in Orlando, where I also spoke but to a significantly smaller room. Mere minutes into speaking to the overflow crowd in the Hilton ballroom, Murray smarmily said, “There is nothing more ridiculous than an adult male telling another adult male what he can do with their genitalia.”

Gadzooks, Batman, what a non sequitur! I dare say not a single person in that huge ballroom gave two hoots about Douglas Murray’s sexual predilections. He can do whatever he wants with his genitals including schtup mud. But maybe not go on and on about it?

In his otherwise masterful book The Madness of Crowds, Murray waxed downright poetically and indeed pornily about the homosexual sex act, arguing for the benefits of sodomy.

James Kirchick is another vigorously-out homosexual who is welcomed into some conservative circles, mostly in the foreign policy sphere. In recent weeks, he published a thoroughly odious column at the excellent and otherwise conservative publication Spectator World about a writer I dare say not a single conservative has ever heard of named Renaud Camus. He says Camus is the hero of a certain swath of the right because he coined the notion of “replacement theory”; oh yes, and that this unknown Frenchman is gay, gay, gay!

There was a time not very long ago when the likes of Miller, Murray, and Kirchick would not have been allowed to express these porny ideas in conservative venues. They would have had the good manners to keep their predilections to themselves. And this points to an ever-growing problem of aggressively-out homosexuals being given pride of place in conservative institutions that are then essentially taken off the board in the struggle to maintain a proper understanding of human sexuality and of the human person.

Consider that until recent months a gender-confused man calling himself Deirdre McCloskey was a noted economist at the American Enterprise Institute. Then-president of AEI Arthur Brooks referred to this man as “she.”

How would AEI ever take an aggressive position on transgenderism when a gruff-voiced man in a dress had an office just upstairs? McCloskey has decamped, though very much is still camp, for the new “conservative” University of Austin. Is this new university going to take a powder on all things gay or trans? Probably.

A few days ago, pro-family activist and writer Peter Wolfgang reported that the longtime publisher of the once venerable National Review is not only an out homosexual, but he is also gay-married. National Review long ago went south on a proper understanding of human sexuality. And is it any wonder?

Wolfgang reported that the publisher of National Review and his “husband” are leading an effort of the so-called “Log Cabin Republicans” to take over the Republican Party in Connecticut. How can National Review ever take a critical position of the homosexual ascendancy when, indeed, the head of the organization leads the gay ascendancy.

Doug Mainwaring has written extensively about how out homosexuals have insinuated themselves into the halls of conservative institutions, including think tanks and publications, thus taking these institutions out of the debate. But there are very few of us still willing to take up this problem. The question then becomes: are Christian conservatives welcome in these institutions, or has there been a great replacement?

Reprinted with permission from Crisis Magazine