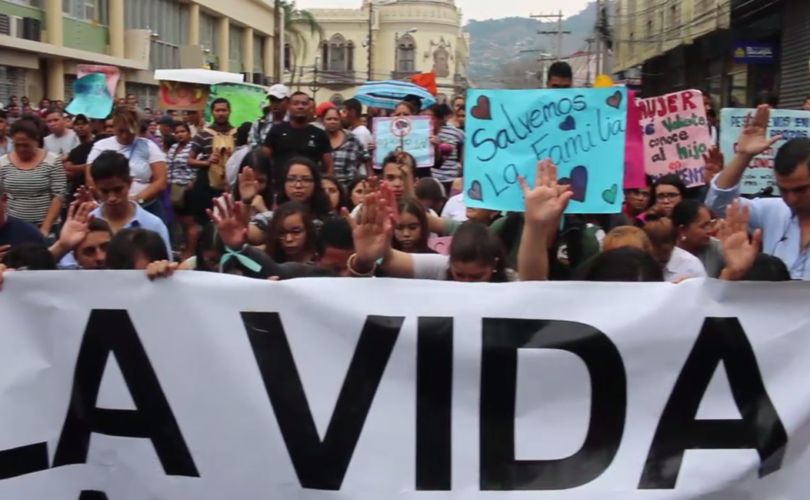 A proposal seeking to legalize abortion in cases of rape, fetal disability, and risks to life of the mother was initiated by foreign independent advisors from Spain contracted by the Honduran government to help lawmakers revise the nation’s Penal Code. The proposal came as the Honduran National Congress undertakes the first major comprehensive revision of the Penal Code since 1983.

In response, thousands of pro-life Hondurans took to the streets of Tegucigalpa, the nation’s capital, to protest the proposed change to the country’s abortion law.

“Pro-lifers, the young people, religious people both Catholic and Evangelical responded immediately, the outpouring of support was tremendous,” Alvarado says, “we reacted as a pro-life country and as a result our nation’s laws continue to defend the life of the unborn child from the moment of conception.”

Honduras is an overwhelmingly pro-life country. According to a recent Pew Research Center poll, 71% of Hondurans believe that abortion should be illegal in all circumstances. Currently, Honduran law protects all unborn life at any moment during pregnancy without exceptions.

Lawmakers in the National Congress decisively rejected the abortion proposal. In the legislative assembly, 77 lawmakers voted in favor of article 169 of the new Penal Code which retains the nation’s abortion law without loosening any of the restrictions currently in place. Five lawmakers voted against the measure while eight members abstained. Lawmakers further rebuffed efforts to legalize the morning-after pill.

“It was a complete defeat for them,” according to Alvarado.

Pro-abortion activists, however, had perceived the occasion as an opportunity to push for the legalization of abortion. In an attempt to win over public opinion, pro-abortion allies rushed to finance numerous television and radio advertisements that aired across the country in the days leading up to last week’s vote.

Pro-abortion NGOs including U.K.-based Amnesty International, and the U.S.-based Center for Reproductive Rights also weighed in in the hopes of swaying lawmakers.

“By criminalizing abortion, the Honduran Penal Code is incompatible with human rights standards and must be modified without delay,” Erika Guevara-Rosas, the Americas Director for Amnesty International said on the organization’s website.

A number of parliamentarians from Spain, Sweden, Finland, Slovenia, and Belgium in the EU’s European Parliament also sent a letter to leaders in the Honduran National Congress last week, strongly urging lawmakers to legalize abortion to accord with purported international human rights standards.

A group of United Nations human rights experts also condemned Honduras for its laws in defense of life, threatening the Central American nation with failing to heed recent recommendations handed down by UN treaty bodies:

We sincerely hope that the Honduran Congress will seize this key opportunity to comply with its obligations to eliminating discrimination against women in its legislation…we regret that the criminalisation of abortion is maintained in the bill as a serious offence despite recommendations from the UN’s Universal Periodic Review and the Committee on the Elimination of Discrimination against Women as well as the Committee against Torture.

Honduras, as state party to the Convention on the Elimination of All Forms of Discrimination against Women, and to the Convention against Torture and Other Cruel, Inhuman or Degrading Treatment and its optional protocol, is bound by the provisions of these UN treaties. However, neither of these treaties mention abortion, let alone any purported human right standard to legalize abortion.

The Committee on the Elimination of Discrimination against Women (CEDAW) and the Committee against Torture (CAT) are charged with monitoring the implementation of these treaties respectively.

CEDAW concluding observations from periodic review last fall had condemned Honduras for its pro-life laws, urging Honduras to come into compliance with “circumstances under which abortion must be decriminalized, namely, at least in cases of rape or incest, threats to the life and/or health of the woman, and severe foetal impairment.” CEDAW based its recommendation on a statement on reproductive health at the committee’s 57th Session. Recommendations issued by treaty bodies, like CEDAW, however, are non-binding on state parties.

Furthermore, the Universal Declaration of Human Rights expresses the international consensus that all people have the right to life, liberty, and security of person.

“It is reprehensible that UN human rights experts have turned human rights on its head, using the stature of their office to attack, rather than to defend, the universal right to life for the most defenseless among us,” says Population Research Institute President Steven Mosher, “we need to continue to work to cut public funding from all entities, groups and individuals who engage in this kind of cultural imperialism.”