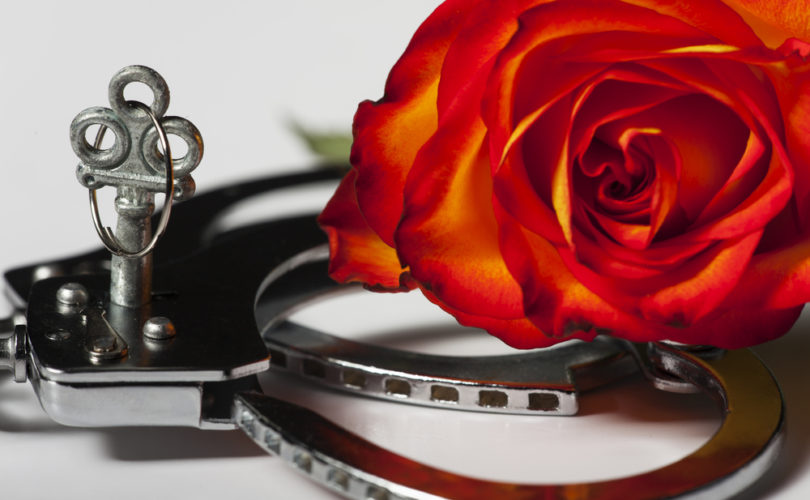 (ThePublicDiscourse) – Fifteen years ago, in an essay titled “Hooking Up: What Life was Like at the End of the Second Millennium,” the novelist Tom Wolfe asked: what will future generations think about us when they looked back on our strange day and age?

He noted that by the year 2000, “dating,” that ritual in which a boy asked a girl out for the evening and took her to dinner, was dead. Drawing on the old use of baseball terminology to describe romantic encounters, Wolf writes:

In the year 2000, in the era of hooking up, “first base” meant deep kissing (which was now known as “tonsil hockey”), and the groping, and the fondling; “second base” meant oral sex; “third base” meant going all the way; and “home plate” meant . . . learning each other’s names. Getting to home plate was relatively rare, however.

This captures the gist of the semi-anonymous, emotionally detached, uncommitted sexual encounter so typical on college campuses today.

Fifty Shades: A Model of Abuse

In 2013, social scientist Amy Bonomi of Michigan State University published an interesting study titled “‘Double crap!’ abuse and harmed identity in Fifty Shades of Grey.” In this study, the relationship depicted in the story was assessed for characteristics of “intimate partner violence,” using widely accepted standards from the CDC for emotional abuse and sexual violence.

This study found that nearly every interaction between the male and female protagonists in the book, Christian and Anastasia, was emotionally abusive. Their relationship includes typical features of abusive relationships, such as stalking, intimidation, and isolation. In fact, the book’s pervasive sexual violence meets the CDC’s definition of sexual abuse—including Christian’s use of alcohol to overcome Ana’s reluctance to consent. The researchers also found that Ana exhibited classic signs of an abused woman, including the sense of a constant perceived threat, stressful coping styles, and an altered sense of identity.

A second study published in 2014 by the same author looked at 650 women aged 18-24; it found that the women who had read the book were more likely than those who had not read the book to exhibit signs of eating disorders and have a verbally abusive partner. Women who read all three books in the Fifty Shades trilogy were found to be at increased risk of engaging in binge drinking and having multiple sex partners—known risks associated with being in an abusive relationship.

There are limitations to this study: it did not distinguish whether women experienced the health behaviors before or after reading the books, so we cannot say whether the book contributed to these behavioral problems. It’s entirely possible that some women were more drawn to the book because they struggled with these behavioral issues already. But Bonomi argues that the findings are problematic either way. As she explains it:

The Problem of Consent

That element is consent.

First, people often consent to things that they are not really comfortable with; they do so for many different reasons and under many different social pressures. We see this clearly in Ana’s reluctance to sign Christian’s contract. Second, people often consent to things that turn out to be quite harmful to them. For consent to be authentic consent, it must be truly informed. To consent, people must understand the risks of what they are agreeing to do. This is a basic tenet of medical ethics, and it applies here as well.

I recall one patient I treated, a young man who was one of the smartest people I’ve ever met. He was in a committed relationship with a similarly brilliant but troubled young woman. She wanted him to hit her during sex. He consented … sort of. That is, he agreed, and he did it, but he never really liked it. He was always reluctant. It troubled him, and eventually it got in the way of things. The relationship, as you might expect, eventually fell apart.

People often nurture the fantasy that sex can mean whatever we want it to. This fantasy involves an unrealistic and strange sort of mind-body split, a kind of dualism. People mistakenly believe that the mind, the sovereign will, is in complete control. The body is just a tool, a sort of appendage, detached from the mind. So, if the mind decides that sex means nothing, the body must obey. If the mind decides that it wants sex to be violent and domineering today, but warm and tender tomorrow, the body must just obey.

But the mind and the body do not work that way. There is no such mind-body split. Rather, the medical and psychological sciences are increasingly demonstrating that there is a profound and inseparable connection between mind and body. And the body—not just the mind—is obviously involved in sexual encounters. The body has its own laws and its own logic; the body has its own wisdom, and it operates on its own terms. The human body must obey the laws of biology, of neuroscience, and of human psychology. And when we push against these, the body will inevitably push back.

Christian Grey clearly believes that his will is in complete control. He insists on having sex without romance or emotional attachment—aggressive, domineering, controlling sex. He actually believes that this arrangement can be secured by means of both parties signing a contract and signing a nondisclosure agreement. A written contract! Consent, do you see?

This approach is based on the belief that the meaning of sex can be turned on and off like a switch. I can experiment a bit with sex and aggression, or sex and violence, or sex and dominance, or sex and submission, or sex and humiliation. Then, when I find a relationship that I wish to be tender, or loving, or committed, or mutually respectful—then I can simply flip the switch in my brain, and suddenly I make sex mean something else.

But the human mind and the human body simply do not work this way. The modern science of neuroplasticity reveals that our brains continue to change—to be molded—across our lifespan, in response to our behaviors, our relationships, and our life experiences. Our brains obviously influence our behavior. But the reverse is also true: our behaviors influence our brain. So our choices have neurobiological consequences: our behaviors hard-wire, and re-wire, our brain in ways that profoundly shape who we are and how we function.

An obvious example of this occurs in addictions. In an addiction, we become habituated to something—let’s say, a drug—and with repetition, new things get hard-wired into our brain. The more emotionally charged an experience is, the less repetition is necessary to achieve this hard-wiring. This is why an extremely powerful high from a drug of abuse can lead very quickly to addictive behavior and brain changes.

With this in mind, consider sexual experiences, which are also intensely emotionally charged. With sexual behaviors, things get wired into our brain rather easily; even experimentation or dabbling has tangible physical effects. Undoing these new neural networks (or brain maps) is much more difficult and prolonged than the original process of forming them. Forming the addiction was easy; recovering from the addiction is hard.

In The Brain That Changes Itself, psychiatrist Norman Doidge summarizes research on the neurobiological aspects of sexual development. He writes: “The human libido is not a hardwired, invariable biological urge but can be curiously fickle, easily altered by our psychology and the history of our sexual encounters,” and he goes on to conclude: “Sexual taste is obviously influenced by culture and experience and is often acquired and then wired into the brain.”

Human beings have neural networks related to sexual behavior, and these are shaped in subtle ways by our sexual experiences. We have separate neural networks related to anger and aggression, and these are shaped and strengthened when people engage in violent or domineering behaviors. We have still more separate brain maps for fear and anxiety, which are shaped and reinforced by frightening or anxiety-provoking experiences.

If you think about these three emotional experiences—sexual arousal, aggression, and fear—they are typically quite distinct emotional experiences. There is some overlap between them in terms of physical or bodily response: all three, for example, involve increases in heart rate, respiratory rate, and blood pressure, because all three involve activation of the sympathetic nervous system. And yet, for most healthy individuals, sexual arousal, aggression, and fear remain distinct emotional, cognitive, and physical experiences. This is, I will suggest, a good and healthy thing.

So these neural networks and these experiences normally remain distinct—unless our experiences begin to fuse them together. When this fusion happens, the brain gets confused. And this is exactly what happens when people experiment with sadomasochistic sexual practices. These distinct neural networks and brain maps become fused according to Hebb’s principle: neurons that fire together wire together. Once this happens, aggression automatically triggers sexual arousal. Or fear and anxiety automatically trigger sexual interest. When this fusion of neural networks becomes pronounced, people often will present to the psychiatrist with clinical problems. Patients complain, for example, that they cannot get aroused unless they get aggressive or violent. Or they complain that they become involuntarily aroused whenever they experience fear. Once these distinct neural networks are fused, the person is—at the level of the brain—literally tied down.

As with drug addictions, patients also complain of a tendency to build up what is called tolerance. In addictions, tolerance means that a person needs progressively larger doses of the drug to achieve the desired high. With sexual behaviors, the problem of tolerance means that one needs to push the envelope more and more just to get aroused or climax. The aggressive, domineering, or painful behaviors need to become increasingly intense and increasingly dangerous in order to “work.” Frequently, a person who engages in BDSM becomes habituated to these intense experiences and needs to up the ante to stay in the game. As with a drug, what might begin with experimentation can end with a kind of enslavement.

It is tragically ironic that at a time when we are recognizing an epidemic of campus rape and sexual assault—and carrying on a national conversation about how to address this problem—we are at the same time rushing to embrace a book and film that pair sex and aggression, and that portray male domination as an enticing or exciting option. But the prevailing orthodoxy on college campuses when it comes to sex is very simple: anything goes so long as it is consensual. This is—I suggest—a very thin and insufficient defense against sexual coercion and sexual abuse. This is not a recipe for a healthy sexual climate on campus.

People deserve accurate information so that they can make truly informed decisions about their sexual choices. Understanding the clinical science on sex and the brain might push us to think twice before hooking up or tying down.

Aaron Kheriaty, MD, is Associate Clinical Professor of Psychiatry and Director of the Program in Medical Ethics at the University of California Irvine School of Medicine. This article is reprinted with permission from The Public Discourse.