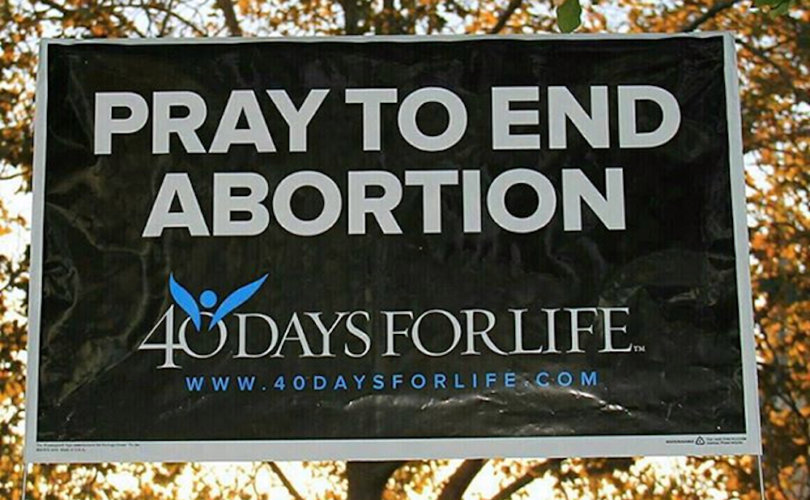 NOTTINGHAM, U.K., April 13, 2018 (LifeSiteNews) – 40 Days For Life is a Christian pro-life campaign group which aims to end the scourge of abortion by praying outside abortion clinics and offering women an alternative to aborting their unborn child. Holding placards which read ‘Pray to end abortion’, ‘Pro woman, pro baby, prolife’ and ‘Pregnant? Need help? Ask’, volunteers pray quietly for an hour or more, and the vigil is maintained for 12 hours per day for 40 consecutive days until Palm Sunday.

In Nottingham we have recently completed our third 40 Days for Life vigil on public land, near to one of the entrances to the main hospital (QMC) where many abortions are carried out. Our vigil began on Wednesday 14th February (Ash Wednesday). This year’s choice of location was in response to a police request and so we were confident that our vigil site would be legal, and this was confirmed by early visits from the police, to check on our safety.

On the first day, we were visited by community police enforcement officers from Nottingham City Council. Their first visit (in the middle of the day) was to offer support, should we be threatened or abused. It was their job, they told us, to protect our freedom to protest.

The second visit, later the same afternoon, was to say that we were no longer allowed to be where we were, and must cease our vigil. Since we knew that our location and our activities were within the law, we continued.

Then, on 20th February I was given a formal letter which told us that our behaviour was ‘causing, or likely to cause, harassment, alarm or distress’ to others, and that we must no longer carry out our vigil in the vicinity of the hospital. Having taken legal advice, I wrote a detailed letter to the City Council, in which I explained the peaceful nature of what we were doing.

We heard no more from the City Council until 16th March. At 4pm in the afternoon, I was about to leave the vigil when two enforcement officers from the City Council approached, gave me a brown envelope heavy with documents, and told me that I must leave immediately, as there was an injunction requiring me to do so.

If I did not comply with this order, they explained, I could be imprisoned, fined, or have my assets seized.

Naturally, I had a few questions to ask.

What was the reason for this injunction? The reason given was that my behaviour was deemed to be ‘anti-social’, as in the ‘Anti-Social Behaviour, Crime and Policing Act’ of 2014.

There were many more questions that I wanted to ask. However, the city officers were clearly becoming impatient. They warned me that I needed to leave immediately. Or else.

A fellow volunteer, who had just arrived, took my poster, put it around her neck, and began to pray, quietly. Just because there was an injunction against me, didn’t mean that she was going to stop praying!

When we looked at the documents which had been given to me, it became apparent that the case was weak. It included witness statements from a City Council official (the head of City Centre Management and Regulation), a hospital official (Head of Operations at the clinic where most abortions are carried out), two female employees of the hospital, and one other woman known to be a prominent pro-abortion campaigner.

The statement from the hospital official conceded that our behaviours in previous years were always peaceful, even ‘passive’, and said that the problems for the hospital (complaints from patients and users) only arose when there were pro-abortion counter demonstrations. The statements of other witnesses were full of inaccuracies and inconsistencies, and essentially argued that they were offended by our stance on the issue of abortion. Bizarrely, one of the witnesses said that as she had passed by, members of our group ‘were chanting something, possibly in Latin, and I found this to be intimidating and sinister.’

The statement from the Council official conceded that the police had advised that ‘there are currently no concerns from a criminal perspective, as there is no disorder, damage to property or disruption to the local community.’ Nevertheless, he argued that the criteria required for an injunction as set out in the Anti-social Crime and Policing Act (2014) had been met, as our behaviour (a reminder: praying quietly and holding posters) constituted anti-social behaviour. He challenged our assertion that our behaviour is peaceful: ‘Peaceful means conflict free, amicable, calm or friendly. The protest is none of these things.’ Yet in the following sentence, he admitted that ‘the Respondent (me) is not aggressive or causing disorder’.

In summary, the argument of the City Council against me, which had been sufficient in my absence to justify in a court of law the unusually strong measure of an emergency injunction, was that there were individuals who disagreed with us and found our behaviour – in praying for an end to abortion, and in offering help to women who might wish to keep their baby – so offensive as to require stopping it immediately.

'Right to freedom of expression '

On Friday 23rd March, a court hearing in Nottingham County Court gave me the opportunity to defend myself from this accusation of ‘anti-social behaviour’. I had excellent support and advice from Neil Addison (TMLC), and Laurence Wilkinson (ADF). Having prepared the legal arguments, Neil was unable to represent me in court due to illness; and I was grateful for the support of John Smeaton of SPUC, who sat alongside me in court as I presented my own defence.

As has been reported quite widely, the judge overturned the injunction. Richard Owen, QC, ruled that the original injunction should never have been granted; that there was no evidence that our vigil was anything but measured and peaceful. Nottingham City Council had asked for the injunction to be extended to our whole group; he refused this.

The Council had also requested that the matter be brought to a full, two-day trial. Again, he refused. Judge Owen pointed out that ‘the right to freedom of expression is not a right if it can only be exercised at the discretion of another person [ie the Council].’ My behaviours, he said, did not ‘come near’ to meeting the type of behaviour referred to in the statute.

He directed the Council to pay any costs which I had incurred.

The judge had taken account of the legal arguments provided to the court by Neil Addison. They included the judgement of Lord Justice Sedley, in Redmond v. DPP, who said:

‘Free speech includes not only the inoffensive but the irritating, the contentious, the eccentric, the heretical, the unwelcome and the provocative, provided it does not provoke violence. Freedom only to speak inoffensively is not worth having.’

Given the current political debate concerning the idea of ‘buffer zones’ around abortion clinics, being pushed hard by abortion provider BPAS, this judgement was significant. My behaviour, and by implication that of other members of our 40 Days For Life group, has always been peaceful and positive. All volunteers are required to sign a ‘statement of peace’, promising to behave peacefully and legally at all times. In three years, we have never departed from this undertaking. As with other such vigils across this country, our aim is to pray, and to support women (and indeed men) who ask for support. The subject, of abortion, is admittedly contentious. But does that justify removing it from the public space?

Nottingham City Council used precious resources (the time of its legal and other staff, and the cost of a London barrister), which it could ill afford, on a legal action that was heavy-handed, inappropriate, and unjustified, when the same resources should have been used to tackle some of the many genuine issues of serious anti-social behaviour which arise in our city.

The Court heard evidence that the Council had withheld a key document from the judge when applying for the no notice injunction – potentially a serious offence. Posts on social media showed that at least one councillor was complicit in encouraging individuals to complain against me and our group, in order to justify legal action for which she had been told there was insufficient evidence. In another post, one of the councillors said ‘you can reassure people that we are not going to allow them to use public land for their protest.’ – as though it was for a councillor, and not the law, to make this decision. Since then, in an interview with BBC Radio Nottingham, a councillor explained that the judge had ‘missed the point’.

These examples reveal that the Council’s action against a group of people praying had nothing to do with a threat to public order, but was politically motivated. The comments of witnesses against me – one described the idea of people praying for her as a ‘violation’ – were telling; clearly, one of the things they find most objectionable of all is our religious beliefs.

The same theme is evident in counter-protests where prejudice and intolerance of our religious beliefs, or more specifically our Christian beliefs, is always in evidence.  During a protest against our presence last Sunday, one protester held a sign saying ‘If Mary had an abortion, we wouldn’t be in this mess’.

The question needs to be asked, at a time of increasing concern over terrorism and street violence, why are local authorities spending so much time and money going after Christians praying peacefully in public and offering help to vulnerable women.  This is no longer just a debate about abortion: the fundamental right of citizens to express themselves peacefully in public is at risk.