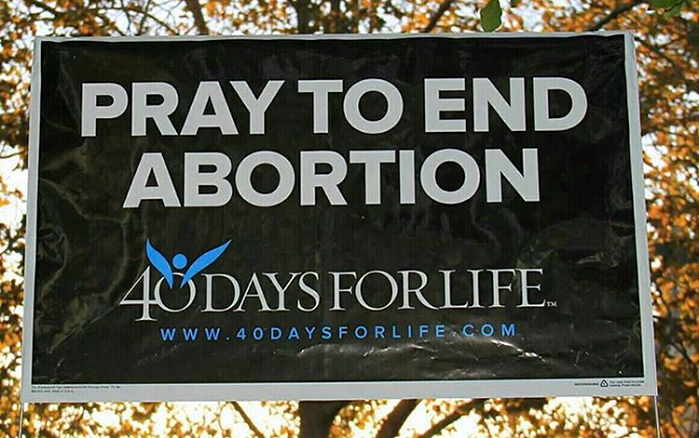 PSPO are normally used to deter drunks, vandals, and the homeless from causing a local nuisance. The council has in this instance created a “safe” zone outside an abortuary where one women has died and a freedom of information request revealed 23 ambulances arrived over a three year period (2014-2016). In this instance, the council have decided to criminalise peaceful prayer.

The vigil organised by the Good Counsel Network is entirely peaceful and the claims of harassment, shouting, and intimidation have been utterly denied. Even the counter-protest organised there states that pro-lifers do not shout or block gates.

Marie Stopes have a magic log book which the media, the council, and pro-abortion protesters seem to believe are proof enough of bad behaviour. Marie Stopes have a record going back years of providing inaccurate information about the Good Counsel Network. If there has been bad behaviour, why hasn’t anyone been prosecuted or even cautioned in 23 years?

There are small images of unborn babies outside the clinic. They are standard medical illustrations typical that people might share after a scan or on a pregnancy app. Women are offered a leaflet on entering Marie Stopes. They are free to accept or reject the leaflet, which among other things outlines the help available to anyone who feels that they have no choice but an unwanted abortion, due to financial or other pressures.

Good Counsel Network does feed and house women and their babies, and help them in many other ways, for as long as they need. Many of the women helped by the vigil have been put under immense pressure to have an abortion they don’t want – by a partner, family, their financial circumstances or other reasons. These women are offered a real choice.

Many of these women have no right to any NHS service except abortion. If they have the baby, they risk being charged £1000. They get no maternity benefits. That’s why they are so grateful for the help on offer. It enables them to get back on their feet again.

The majority of people who support the PSPO have no clue that this is the work of the vigil. The vigil makes them feel uncomfortable and they feel that the vigil is in poor taste. They do not realise that it is literally a lifeline for women who feel completely alone.

Complaints about the vigil have largely been orchestrated by Sister Supporter, a pro-abortion campaign group, the only campaign group in living memory to deliberately engage in the behaviours they say they oppose.

The work of the vigil is funded by charitable donations. The charity is run on a shoestring. This is no slickly-funded operation with a permanent PR team and a chief executive paid a six-figure salary. They are absolute heroes.

After a council-backed campaign of lies and misinformation, enthusiastically supported by an MP, the pro-lifers are now the target of abuse and physical violence. Some members of the public think it is now okay to attack them following the council vote.

Members of the council hid in the abortion centre to try to elicit stories in an attempt to get the vigil banned.

Many of Good Counsel staff and volunteers are Catholic, and it seems that anti-Catholic feeling is alive and well. A small image of Mary is “intimidating” and people have “weaponised rosary beads” (according to Muslim Rupa Huq MP in Hansard).

The so-called consultation exercise was an absolute sham, rigged from the very beginning. When the Be Here for Me campaign urged people to write to the council outside the skewed online consultation form, the council decided to lump all their answers together and essentially disregard them.

It is a very dark moment for democracy, for freedom of speech, for freedom of religion, and for freedom of assembly. More than that, it’s a tragedy for the vulnerable women who get zero help from the state and are essentially victims of coerced abortion.

Nine of these women shared their stories at a council meeting on a cold, dark evening last December. They came with their babies in buggies and their lively toddlers. These are the women who were helped, not harassed, by the vigil. The women who had gladly accepted help from the vigil, who wanted to speak up for the vigil, were not asked a single question. One councillor even asked, “Why did you bring these young girls here?”

These are predominantly poor women, most of black and minority ethnic backgrounds, many who speak English as a second language. These are the women the council chooses to ignore. These are the women who came, with their children, hoping for no PSPO. The council continues to ignore them. The pro-abortion lobby tried to drown out their testimonies outside the Town Hall. We must believe that the voices of these brave women will one day be heard. The leader of the council, Julian Bell, is reported to have visited the pub after the decision to celebrate with pro-abortion campaigners.

Marie Stopes Ealing is the third busiest abortuary in the United Kingdom. In 2016, there were 6,484 abortions, 110 after 20 weeks gestation. Marie Stopes (the woman) was described by her first husband as “supersexed to a degree which was almost pathological.” She was a eugenicist who wrote love letters to Adolf Hitler. The organisation she founded now commits three million abortions a year and is present in 37 countries around the world.

In the UK, one abortion centre had to temporarily stop all abortions after the regulator found nearly 400 botched abortions at Marie Stopes centres in two months with major safety flaws. Women are separated from chaperones once inside their centres because it increases the probability of abortion. The organisation was suspended from providing abortions in Zambia in 2012. A time capsule laden with pornography is laden at their central London office. In Birmingham, Marie Stopes bought and reopened a centre after staff agreed to a sex-selection abortion. In Uganda, after receiving £50 million from the British Government, Marie Stopes regularly turned up the radio in the operating room, so those next door awaiting their turn would not hear the screaming and crying before the illegally aborted babies were flushed into a pit latrine of open sewage.

In 2012, an Irish woman named Aisha Chitira, 32, died in a taxi after having an abortion in Ealing. Dr Adedayo Adedeji, Gemma Pullen, and Margaret Miller were charged and then acquitted of manslaughter.

In December 2011, Ghanian Doctor Dr Phanuel Dartney was struck off the General Medical Register in Britain for almost killing an Irish woman after performing a botched abortion in Ealing. He left parts of the foetus inside her and she had a perforated uterus. The woman returned home and was later hospitalized in critical condition for two months. The same doctor was also accused of performing botching laser surgery on five other women to revolutionise their sex lives. The disciplinary panel of the General Medical Council said he posed a risk to the public by engaging in medical malpractice and dishonesty.

During Lent 2013, the most successful 40 Days for Life campaign ever in the UK was organised in Ealing. Twenty-three women changed their minds during one campaign while four ambulances visited the abortuary. Other testimonies from patients have shown family members forcing women into abortions without their consent. One woman jumped over the wall of the abortion centre to escape a family determined for her abortion.

Marie Stopes has recently come under the scrutiny by the Care Quality Commission (CQC), a regulator that uncovered a catalogue of failings in centres all around the country. The abortion company failed to properly follow rules on consent, and a succession of abortions were left in open waste bins.

The CQC to suspended all activities in Marie Stopes Norwich.

Another damning report shows how Marie Stopes staff received bonuses for encouraging women to have abortions.

The building of Marie Stopes Ealing, 87 Mattock Lane, used to be a Christian house of healing. There is a plaque to St Michael the Archangel still attached to the wall. It was originally owned by Miss Dorothy Kerin, whose constant motto was “Where God guides, God provides.”

The house opened as a home of spiritual healing in 1929 and was called Chapel House. A weekly healing service was held in the building once a week. It is reported that many people were healed, and when physical healing did not take place, sufferers benefitted from tranquility taking the place of anxiety. Dorothy Kerin moved in 1948, to Burrswood, a mansion in the Kent countryside, where a Christian healing hospital exists to this day. Dorothy legally adopted one baby girl, and then eight other orphaned girls, and despite financial difficulty, God poured blessings on them. Dorothy died in 1963.

Peaceful, prayerful and legal vigils have been organised outside Ealing for 23 years. Many woman have thanks to offers of help, offered to keep their children. Please see their testimonies below.

To donate to the Good Counsel Network click here.