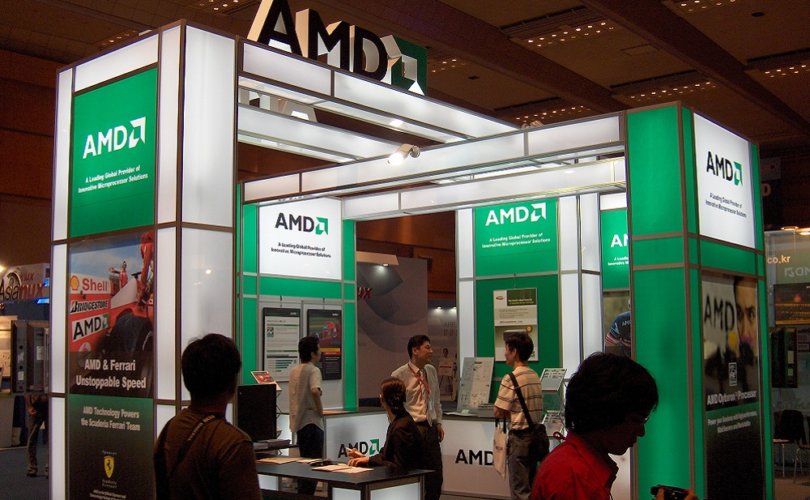 July 16, 2019 (American Thinker) – Did Santa Clara, Calif. chip-maker Advanced Micro Devices (AMD) put profits ahead of U.S. national security? After reading an exposé in the Wall Street Journal by Kate O'Keeffe and Brian Spegele about AMD, the answer might well be “yes.”

In 2014, AMD's shares were hovering around $3 per share, with some stock analysts predicting that the company might go into bankruptcy. That's when Lisa Su was named chief executive. The first thing Su did was travel to Beijing to meet with officials of China's Ministry of Industry and Information Technology. At that time, a Chinese vice minister urged Su to partner with China “to achieve mutual benefits based on AMD's technological strength.” From that initial meeting, a relationship developed that led to an agreement two years later. As the WSJ reports:

The x86 chips are state-of-the-art, made by only two companies in the world: AMD and Intel Corp.  These chips are the most dominant in processor technology found today, so much so that retired Brig. Gen. Robert Spalding, who served on the National Security Council in 2017 and 2018, called them “the keys to the kingdom.”

Using AMD's processor technology, the x86 chips under development in China are code-named the Dhyana chip.  AMD claims that the Dhyana is for commercial applications. Maybe so, but like money, technology is fungible. What's used for advanced commercial applications can also easily be applied to military advancement. And Sugon is not shy about itself. Its own website reads, “Making contributions to China's national defense and security is the [emphasis mine] fundamental mission of Sugon.”

The x86 chip technology is now helping China in its race with the U.S. to build the first next-generation supercomputer, which is essential for military applications such as development of nuclear weapons, encryption, missile defense, and other systems.  Heretofore, China had been unable to match the U.S. in supercomputing power because of its inferior chips.

How did the U.S. government let this deal happen? National security officials whom the WSJ interviewed said they felt that AMD had deliberately designed its deal with Sugon to be overly complex so as to sidestep U.S. regulations. And maybe it's just a coincidence, but this AMD-Sugon deal went down while people from the Obama-Biden administration were in charge of government departments like Treasury and Commerce and before the Trump administration had gotten its feet on the ground.

But by mid-2017, national security concerns reached the Trump White House. Then something unusual happened.

Defense Department officials decided unilaterally to submit AMD's Sugon deal to CIFUS (Council for Foreign Investment in the U.S.) for review, despite Treasury's earlier interpretation that it fell outside the panel's jurisdiction. Only rarely in CIFUS's 44-year history has the committee been asked to review deals without the cooperation of either party involved, according to lawyers who track confidential cases.

On June 21, the Commerce Department, which is now headed by Wilbur Ross, one of President Trump's foremost trade negotiators, announced new export restrictions banning Sugon and its affiliates on the AMD deal from accessing U.S. technology without a license. The Commerce Department determined that Sugon and its Chinese affiliates were “acting contrary to the national security or foreign policy interests of the U.S.” Commerce also added: “Sugon has publicly acknowledged a variety of military end uses and end users of its high-performance computers.”

According to the WSJ, the Commerce Department's actions will make it difficult for China to fabricate future generations of x86 chips, and it is unclear if AMD's Chinese partners will be able to continue producing the current version without AMD's technical assistance. However, because of the deal, China gained significant technical know-how, which has already yielded chips currently powering supercomputers.

There's no way to prove this, but it is not hard to imagine that the door would not have been slammed shut on the AMD-Sugon deal if Barack Obama were still president or if Hillary Clinton were in the Oval Office instead of Donald Trump.  No, presidents do not know the ins and outs of the semiconductor industry, but they appoint the heads of departments that do.  And as the Chinese themselves say, “the fish rots from the head down.”

As for Advanced Micro Devices, it did well for itself by sharing the “keys of the semiconductor kingdom” with communist China. AMD got $293 million in licensing fees plus royalties on the sale of any chips developed from the deal. It also received another $371 million as a payout of selling two semiconductor factories in China and Malaysia to a Chinese company. AMD's stock price went from $3 a share in 2014 to over $32 today.

CEO Lisa Su is celebrated as a turnaround expert who saved an “uninvestable” company.  See her being interviewed by Jim Cramer last year, who introduced her as a “miracle worker,” and look at the glowing comments about her under that YouTube clip.

Everything is about money. Forget country, forget honor, forget community. To give the devil his due, Lenin had an insight about human nature when he observed that capitalists will sell him the rope by which he'll hang them. If such a line of reasoning would be presented to Lisa Su, this turnaround “expert” would cock her head in total puzzlement, not understanding a word of it. She made money hand over fist in salary increases and bonuses and now has a net worth of over $142 million. Su would ask, what wrong with that? After all, isn't America supposed to be the land of opportunity?