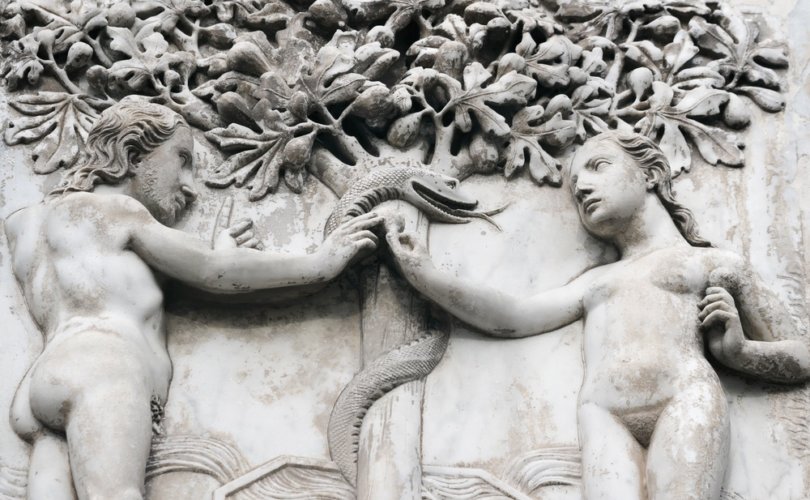 October 14, 2020 (LifeSiteNews) — The great Christian Father of the Church St. John Chrysostom expressed the common conviction of the Christian community when he commented on Moses’s words, “What therefore God hath joined together, let not man put asunder,” arguing that God

gave this command that the one man should be joined to the one woman. But if it had been His will that he should put this one away, and bring in another, when He had made one man, He would have formed many Women. But now both by the manner of the creation, and by the manner of lawgiving, He showed that one man must dwell with one woman continually, and never break off from her. (On Matthew, 62:1 [370 B.C.], in NPNF1,X:382)

The book of Genesis makes clear that God created man and woman for each other — equal in dignity but with different and complementary gifts. The great German saint Hildegard of Bingen wrote that:

After God had created Adam, Adam experienced a strong sense of love, when God sent sleep over him. And God created a figure to love for the man out of his rib, and so the woman is the love of man. As soon as the woman was shaped, God gave man the procreative instinct, so that through his love for the woman he would father sons. For when Adam saw Eve, he was completely filled with wisdom, because he saw in front of him the mother through whom he was to father sons. But when Eve saw Adam, she saw him as if she was seeing heaven, and as the soul lifts up desiring the heavenly, for her hope was resting in man. So also only mutual love and no other shall and may be between man and woman.

In this passage St. Hildegard beautifully summarized the complementary callings of man and woman — of the man to be the spiritual leader of his wife and family; and of the woman to be the help-mate of her husband and the nurturer of her family. With the insight of a true mystic, St. Hildegard saw that God had created the union of man and woman for their mutual sanctification (“as the soul lifts up desiring the heavenly”) and for the procreation and sanctification of their offspring. As partners in this union, Adam and Eve enjoyed equal dignity but distinct roles. To Adam in his role as head of the human family, God gave the task of guarding and caring for his wife and their home in paradise. To Adam alone God gave the commandment not to eat of the fruit of the Tree of the Knowledge of Good and Evil. Eve received this commandment from God indirectly through her husband. Her obedience to the commandment depended on her faith in the Word of God as she had received it from Adam.

The Fall of Adam and Eve

The Bible teaches that God created everything in the universe for man — man, made in the image and likeness of Jesus Christ, the Incarnate Word of God. Not only did God make every kind of material creature for mankind; He also made a host of spiritual beings to serve Jesus Christ the Incarnate Word and the men made in His image. The Bible teaches that a great angel named Lucifer, or the light-bearer, rebelled against God. According to the Fathers of the Church, the foremost commentators on Holy Scripture, Lucifer rebelled because he — a great spirit — did not want to serve creatures of flesh and blood. In his rebellion against God, Lucifer dedicated his angelic intelligence and energies to driving a wedge between God and His human creatures, so as to drag as many of them as possible to eternal damnation in hell. Lucifer’s first attack was directed against Eve, since she had received the commandment of God indirectly through her husband and was more vulnerable to Satan’s clever manipulation of the Word of God.

— Article continues below Petition —
PETITION: Call for an additional Presidential Debate on Family Issues
Show Petition Text
7010 have signed the petition.
Let's get to 7500!
Thank you for signing this petition!
Add your signature:
Show Petition Text

The issues discussed during the three forthcoming Presidential debates will likely focus on the economy, public health, and defense and foreign policy.

But, the family is the cornerstone of American life and deserves its own Presidential debate.

And, if we don't act fast, issues like marriage, the right to life, parental rights in education and health, population control and declining fertility will be overlooked entirely or treated as an afterthought.

That's why LifeSite and the Ruth Institute are partnering on this important appeal.

Please SIGN our petition which urges the Commission on Presidential Debates to schedule a debate which focuses solely on family issues.

The purpose of the Presidential debates is to allow voters to witness an interchange between the candidates and to determine their position on issues which will impact their lives, as well as their rationale for holding those positions.

Of course, the economy, public health and foreign policy are all serious matters, but family breakdown and the over-sexualization of society create massive problems that affect the economy, the criminal justice system, public health, and even national defense.

A strong economy depends on the next generation learning the virtues of hard work and discipline in the family. Strong national defense requires individuals who are willing to sacrifice for their families, even more than the national interest.

And, the decline of the family in America’s cities has led to spiraling crime rates and urban unrest.

Simply put, family issues are key to the success or failure of the country.

And, therefore, the family must be a major focus of the debates.

We need to put the focus where it belongs. We need one debate exclusively on what the candidates will do to support the family.

Thank you for SIGNING this petition which urges the U.S. Commission on Presidential Debates and the candidates, themselves, to agree to a fourth debate focusing solely on family issues.

The Bible tells us that Satan did not immediately tempt Eve to eat of the fruit of the Tree of the Knowledge of Good and Evil. Instead, he twisted God’s words so as to make them appear unreasonable and self-contradictory, and only then, after he had sowed a seed of doubt in Eve’s mind concerning the goodness and trustworthiness of God, did he appeal to her pride and selfish delight in the appearance of the fruit. In this way, her selfish delight in the appearance of the fruit overwhelmed her reverence for the Word of God and for the authority of her husband through whom she had received God’s commandment. According to Genesis:

1 Now the serpent was more subtle than any of the beasts of the earth which the Lord God made. And he said to the woman: Why hath God commanded you, that you should not eat of every tree of paradise?

2 And the woman answered him, saying: Of the fruit of the trees that are in paradise we do eat:

4 And the serpent said to the woman: No, you shall not die the death.

5 For God doth know that in what day soever you shall eat thereof, your eyes shall be opened: and you shall be as Gods, knowing good and evil.

6 And the woman saw that the tree was good to eat, and fair to the eyes, and delightful to behold: and she took of the fruit thereof, and did eat, and gave to her husband who did eat.

God had set Adam over his wife as her protector and guide. According to the Fathers of the Church, if Adam had corrected Eve and brought her to repentance, she could have been restored to God’s grace. But Adam failed in his duty toward her, and, by placing her will above the Will of God, he followed her into disgrace and disobeyed God.

And to Adam he said: Because thou hast hearkened to the voice of thy wife, and hast eaten of the tree, whereof I commanded thee that thou shouldst not eat, cursed is the earth in thy work; with labour and toil shalt thou eat thereof all the days of thy life.

18 Thorns and thistles shall it bring forth to thee; and thou eat the herbs of the earth.

19 In the sweat of thy face shalt thou eat bread till thou return to the earth, out of which thou wast taken: for dust thou art, and into dust thou shalt return.

You are head of your wife, and she has been created for your sake; but you have inverted the proper order; not only have you failed to keep her on the straight and narrow but you have been dragged down with her, and whereas the rest of the body should follow the head, the contrary has in fact occurred, the head following the rest of the body, turning things upside down.” (St. John Chrysostom, Homilies on Genesis 17:17, English version, The Fathers of the Church, vol. 74, p. 231)

As long as Adam and Eve remained in the grace of God, they were able to love each other unselfishly with His divine love. But as soon as Adam and Eve disobeyed God, they lost His divine grace and lost control over their thoughts and passions. The light of God’s glory, which had shone around their bodies from the moment of their creation, now dimmed, and exposed their nakedness. The husband and wife who had been created in union with God, with each other, and with creation now found themselves alienated from God, from each other, and from all created things. The Original Sin of Adam had brought death and divorce into the world.